Welcome to Harmonia . . . I’m Angela Mariani. This hour, in light of the holiday season, we’re simply spinning some discs (so to speak,) of three favorite early Christmas tunes. One of the tunes originates as chant, but the other two have very danceable melodies despite their seasonal lyrics. We’ll experience medieval, renaissance, and baroque European music based on Angelus ad virginem, Hodie Christus natus est, and In dulci jubilo from composers with famous names like Gabrieli and Praetorius and Bach, with lashings of music by the eponymous Anonymous. Plus, our featured release of the week is the 2021 recording Marc-Antoine Charpentier: A Christmas Oratorio, performed by Les Arts Florissants, directed by William Christie.

From the 2018 recording A Renaissance Christmas, we heard The Sixteen, conducted by Harry Christophers, singing Tomas Luis de Victoria’s 6-voice motet Quem vidistis pastores? The text is taken from the office of Matins on Christmas Day and tells the story of Christ’s birth according to the New Testament.

What does the word “holiday” conjure for you? Though the word originally only referred to special religious days, by the fifteenth century it had already come to mean a day on which normal activities are suspended or reduced, usually to allow people to celebrate or commemorate something. Celebration and commemoration often involve ritual, performance, and music, and this is where Harmonia enters the aural picture to invite you to wrap your ears around the sounds of Christmas music from many centuries and many traditions. We’re going to focus especially on different takes of the same text, and sometimes even the same music.

Let’s start with a medieval song that begins the Christmas story, when Mary learns from the Angel Gabriel that she is to bear a Very Special Child. Angelus ad Virginem is believed to have been written by Phillipe the Chancellor, who died in 1236, and Chaucer’s Clerk sings it in a Canterbury Tale. The song is also found set in English in the Middle Ages. We’ll hear three versions in two languages and three very different performances.

We heard three version of the song Angelus ad virginem. The first, sung by the Gesualdo Six, directed by Owain Park, was on their 2019 CD simply titled Christmas; it was followed by “Gabriel from Evene King” performed by The Telling on the 2019 release The Secret Life of Carols: 800 Years of Christmas Music; and we ended with Anonymous 4 singing “Gabriel, fram heven-king” on their 1993 recording On Yoolis Night: Medieval Chants & Motets.

We turn now to an antiphon that was heard at Vespers on Christmas Day, Hodie Christus natus est (Today Christ is born)—the actual cause of all this celebration! Needless to say, loads of composers found the text and indeed the melody of the chant an inspiration, as you’ll hear. Settle back now for the chant itself, followed by a 6-part setting from 1583 by Cipriano da Rore that presents the chant in two of the voices in a slow-moving canon.

We’re going to stick with this text that is so central to Christmas and hear how William Byrd and Giovanni Gabrieli celebrate the words.

The Queen’s Six sang William Byrd’s Hodie Christus natus est on their 2017 Lo how a rose e’er blooming, and then we heard the Dunedin Consort, directed by John Butt, singing Giovanni Gabrieli’s double choir setting of the text, included in the recording JS Bach: Magnificat and Christmas Cantata, released in 2017.

Finally, listen as Alleluia turns into “Noe” in another 8-part setting by Jan Pieterszoon Sweelinck.

You can hear highlights from recent and archival recordings concert of early music… and more… on our podcast, Harmonia Uncut -- curated and hosted by Wendy Gillespie. Listen online at harmonia early music dot org and through iTunes.

Welcome back. We’re celebrating the season with three favorite early Christmas tunes. Another seasonal tune will sound familiar to some in a nineteenth-century English rendering of the text that begins “Good Christian men rejoice,” though its original words began In dulci jubilo and mix Latin lines with German ones. Here is a very danceable instrumental rendering of the tune as possibly played in Colonial America:

From the 2018 release Colonial Christmas, that was Craig Duncan playing all the instruments on a setting of “Good Christian men rejoice,” also known as In dulci jubilo.

You won’t find this tune in your chant book. As far as we know, it first appeared in a 1582 Finnish songbook. The words date back to the Middle Ages, perhaps to the mystic Heinrich Seusa, who says he heard the angels (and as you’ll hear, these are bilingual angels!) sing the words of the hymn and joined them in a dance of worship. That qualifies the song as a carol, for a carol in those days was a sung dance, to which reactions were, not surprisingly, mixed. One writer said that the circling of the dance symbolized the joining of the elements, and the harmony of the planets, the music of the spheres; others, like one medieval priest, said that these round dances were "circles with the Devil at the center."

Be that as it may, settings of In dulci jubilo are mostly found in northern Europe - for instance, in this setting by Michael Praetorius.

Michael Praetorius’ In dulci jubilo was sung by the Choir of the Queen’s College, Oxford, on the 2020 disc A ceremony of carols.

Hieronymous Praetorius was a slightly older, less famous contemporary of Michael’s, not directly related. The two met in Groningen in 1596, when Hieronymous became acquainted with the Venetian school, as you can hear in this 8-part setting of In dulci jubilo.

The ensemble Voces 8 sang Hieronymous Praetorius’ In dulci jubilo on their 2012 Christmas CD.

Remaining in northern Germany, and among large families of musicians, here are a couple of settings of the tune for organ by Johann Michael Bach and his first cousin once removed and son-in-law Johann Sebastian (Michael was the father of Maria Barbara Bach, Sebastian’s first wife).

French baroque composer Marc-Antoine Charpentier wrote more masses, oratorios, pastorales, and noels for the Advent and Christmas seasons than any of his contemporaries. On this special holiday edition of Harmonia, we'll sample these forms on our featured recording, Marc-Antoine Charpentier: A Christmas oratorio, the 2021 release of Les Arts Florissants, the baroque ensemble that is synonymous with the name of its founding director, William Christie.

Let’s turn to the title tracks now. We’ll listen to a segment of the Second Part of Charpentier’s oratorio, which is the pastorale Sur la naissance de notre Seigneur Jésus Christ (on the birth of our lord Jesus Christ) H.482.

Instruments set the scene with a symphonie, followed by what sounds for all the world like a shepherd and shepherdess having a pastoral conversation, for so it is set up, but the words tell the story of Christ’s birth, emphasizing Mary’s virginity and Christ’s humility. The conversation goes on to involve more shepherds and shepherdesses singing and dancing together.

We heard Scene 1 of Charpentier’s pastorale Sur la naissance de notre Seigneur Jésus Christ on our featured recording by Les Arts Florissants, directed by William Christie, entitled Marc-Antoine Charpentier: A Christmas oratorio released by Harmonia Mundi in 2021—but a record that originated in 1983 as a vinyl disc.

The writers for this edition of Harmonia was Wendy Gillespie and LuAnn Johnson.

Thanks to our studio engineer Michael Paskash, and our production team: LuAnn Johnson, Wendy Gillespie, Aaron Cain, and John Bailey. I’m Angela Mariani, wishing you a joyous holiday season, and inviting you to join us again for the next edition of Harmonia. 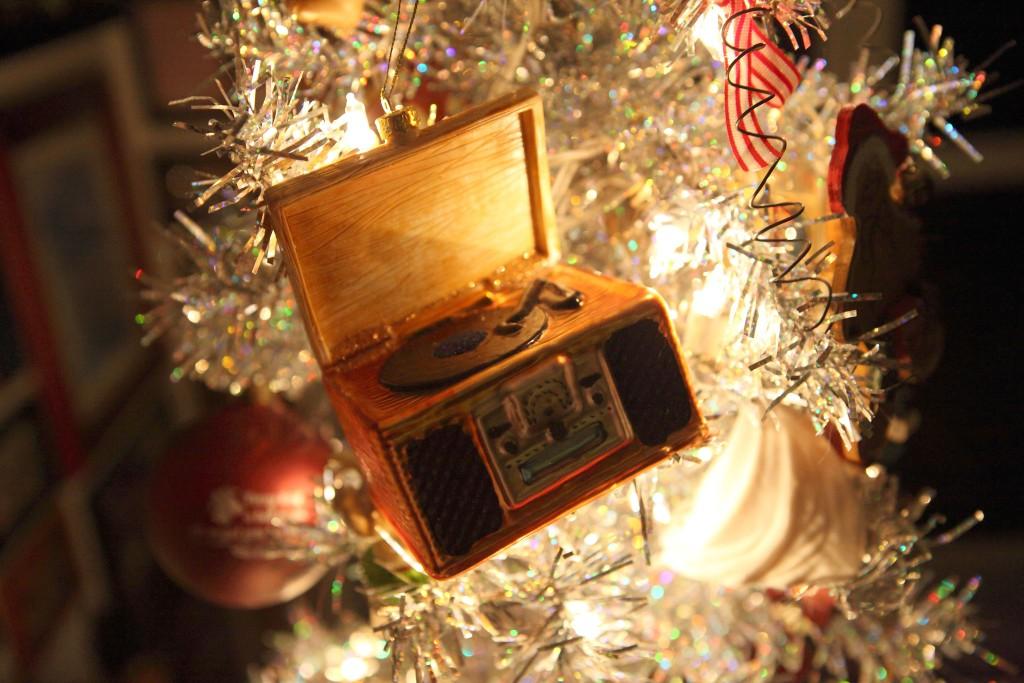 This hour, in light of the holiday season, we’re simply spinning some discs of three favorite early Christmas tunes.

One of the tunes originates as chant, but the other two have very danceable melodies despite their seasonal lyrics. We’ll experience medieval, renaissance, and baroque European music based on Angelus ad virginem, Hodie Christus natus est, and In dulci jubilo from composers with famous names like Gabrieli and Praetorius and Bach, with lashings of music by the eponymous Anonymous.

Plus, our featured release of the week is the 2021 recording Marc-Antoine Charpentier: A Christmas Oratorio, performed by Les Arts Florissants, directed by William Christie.