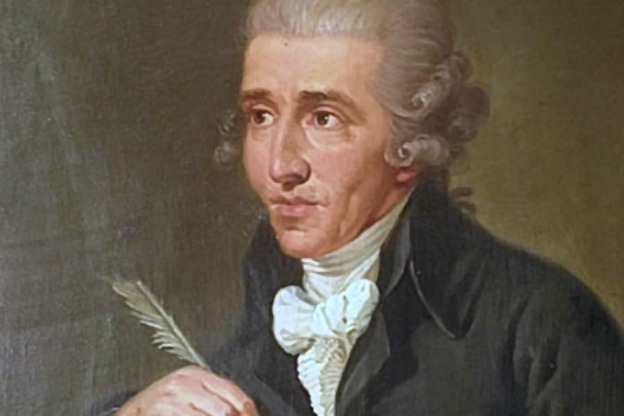 Joseph Haydn and the Esterházy Family

Haydn spent much of his career as the composer for the Esterházy family—a very wealthy family of the Austro-Hungarian nobility. Haydn’s duties began in 1761 and included composing music commissioned for the orchestra at the palace residences both in Vienna and in Eisenstadt. An early symphony, number 6, titled Le Matin, is one that Haydn composed during his first year of employment. For the premiere of the piece, Haydn had a relatively small but none too shabby orchestra at his disposal. Made up of virtuosic soloists who like Haydn had been recruited into the service of Prince Esterhazy, Haydn’s Le Matin not only showed off the ensemble as a whole, but gave individual spotlights on its principle players.

Haydn’s work was pretty tightly regulated when he first moved to the Esterházy court—whatever he composed automatically became the property of the prince. Haydn’s music was popular though, and a lot of it still circulated in unofficial copies that Haydn nevertheless couldn’t turn a profit from. But, things changed for him when his contract came up for renewal in 1779. In the new contract, the prince gave Haydn permission to sell his works abroad. Perhaps this change in his contract, and the possibility of some extra cash is why Haydn, who after a 10 year chamber music hiatus, started composing string quartets once again. The product was op. 33, a set of six quartets, that in Haydn’s own words, were composed in a ‘new and special way.’

Shortly after his successful op. 33 quartets, Haydn returned to composing for the orchestra when he received a commission to write six symphonies from the Concert de la Loge Olympique in Paris. Premiered in 1787, the Paris orchestra was a different world than the smallish orchestra at Esterhazy, the French, having on hand a section of 40 violins and 10 double basses. Perhaps the growl of all those basses is how, in the 19th century, the symphony, L’ours or “the bear" got it's nickname.

Haydn was certainly most prolific in his writing for symphony and string quartet—but he also wrote concertos—some have been lost, like the concerto for violone, some are well-known and have been celebrated, like the C major cello concerto, and some have just been underplayed, like the G major violin concerto which Haydn probably wrote fairly early in his career.

You can hear Haydn's Le Matin and L'ours performed by Boston's Handel and Haydn Society on their 2013 CORO release.  Also on the recording, the orchestra's concertmaster, Aisslinn Nosky presents Haydn's G major violin concerto. Harry Christophers, who is the long time leader of the UK based ensemble The Sixteen, and more recently, artistic director of Handel and Haydn society, conducts.