Have You Listened to Ford Lately?

The turn of the seventeenth century was a great time to be a musician in England. Church, court, and theatre gigs abounded, as did patrons in spacious country homes, and the names of well-known performers and composers - Byrd, Gibbons, Weelkes, Dowland…the list goes on and on. It would be all too easy to pass over Thomas Ford in such august company, but by doing so we would miss out on some fantastic music, so instead he is going to be the star of this episode, after which we’ll enjoy music from our featured recording, La Magnifique: Flute Music for the Court of Louis XIV, performed by Barthold Kuijken and friends.

One of only three anthems composed by English composer John Bull, known mostly for his keyboard music. Fretwork and the Magdalena Consort performed John Bull’s anthem “Almighty God, which by the leading star” (on the 2020 CD, In Chains of Gold, volume 2).

We don’t know much about the English composer Thomas Ford - where he came from, when he was born, how he learned his trade - but we do know that he was primarily a court musician who had risen, by the time of his death, to ‘composer to the private musick’ and as quote ‘a viall, among the lutes and voices’ at a combined yearly salary of £80 plus liveries--a very decent living indeed for 1648!

Let’s get straight into Thomas Ford’s music, starting with a couple of his best-known songs from his 1607 publication Musick of Sundrie Kindes: we’ll hear Michael Chance sing the elegant “Since first I saw your face” followed by “Fair, sweet cruel” with Christopher Wilson on the lute.

Michael Chance and Christopher Wilson performed Thomas Ford’s “Since first I saw your face” and “Faire, sweet, cruel.” The collection Musick of Sundrie Kindes, from which these songs are taken, was first published as what is called a table book. Each of the parts is printed facing in a different direction, so that performers can gather around a table with voices and instruments all reading from the same book.

Isn’t it interesting that Ford’s title page states that the songs are “four 4 voices to the lute,” and yet we find them recorded more often sung as lute songs? Let’s do a comparison and hear another of Ford’s greatest hits, “There is a lady sweet and kind,” sung first in four parts by the Amaryllis Consort, then as a lute song sung by Ian Partridge, secure in the knowledge that either way of performing the piece works just fine.

We heard Thomas Ford’s “There is a lady sweet and kind.” Sung first in four parts by the Amaryllis Consort, Charles Brett directing, on their 1987 CD English Madrigals. And then we heard the same song as a solo to the lute, sung by Ian Partridge, with Konrad Ragossnig on the 1990 recording A Gardin for Delights: English Lute Songs. One person’s madrigal is another’s lute song!

At the end of the first book (of Musick of Sundrie Kindes) is a dialogue for 2 voices accompanied by two bass viols. Thomas Ford was himself a viol player, and he knew how to write idiomatically for that instrument, as we’ll hear more of after this, but first let’s listen to dialogue between the two lovers, personified here by Emma Kirkby and Martyn Hill with the Consort of Musicke.

Thomas Ford’s “Shut not sweet breast”, from the 2017 Decca recording Amorous Dialogues was sung by Emma Kirkby and Martin Hill, accompanied by viols of the Consort of Musicke.

The second book of Musick of Sundrie Kindes is a collection of duets for, Ford tells us, “two basse-viols, the Liera way,” which means that the bass viols are not tuned the standard way, but in ways that make large open chords possible without hugely complicated finger gymnastics for the player. Two players can easily sound like more than two, as you’ll hear in this pavan and galliard that are subtitled “Mr. Maines Choice.” It never hurts to dedicate a piece to a specific person!

Wieland and Sigiswald Kuijken, lyra viols, played Thomas Ford’s Pavan and Galliard “Mr. Maines Choice” on the intriguingly titled “Music for a Viol” released (by Accent Plus) in 2011, but recorded in 1992.

You can hear highlights from recent and archival concert recordings of early music on Harmonia Uncut -- our podcast, curated and hosted by Wendy Gillespie. Listen online at harmonia early music dot org and through iTunes.

Welcome back. There’s lighter music in Thomas Ford’s second book of Musick of Sundrie Kindes, also dedicated to specific friends or patrons. Two pieces titled “Why not here?” (Mr. Crosse his choice) and Cate of Bardie (The Queen’s Jig) amuse both the player and the listener with what Ford calls “thumps” - notes that are plucked with the left hand rather than bowed with the right hand.

Hille Perl and Friedericke Heumann, joined in the second piece by Lee Santana on cittern, played “Why not here?” and “Cate of Bardie” on their 2008 recording entitled Why not here? Music for two lyra viols.

“Almighty God which hast me brought” will likely be recognized by some as a church anthem, but it began its life as a four-part song with added parts for three chordal instruments and instructions to double three of the four vocal lines with other instruments, resulting in a lush musical texture.  It also had many playing options for smaller forces, even down to voice and lute.  It was part of a collection of lamentations on the death of Prince Henry, England’s crown prince, who died tragically young; Thomas Ford was a part of his [quote] “private musick,” and after his death, became part of the private music of his brother Charles, later Charles I. Let’s listen to a choral version of the piece sung by the Clare College Chapel Choir, directed by Timothy Brown.

We heard “Almighty God who hast me brought” sung by the Clare College Chapel Choir, directed by Timothy Brown, on their 1995 recording Ave Verum: Favourite Parish Anthems. Of the composers who contributed to this volume of lamentations on the death of the young Prince Henry, Thomas Ford was probably the one closest to the young prince, having been part of his household. Here is Ford’s setting of the text “Tis now dead night, and not a light on earth, or star in heaven doth shine.”

Now for our featured release of the week, the 2021 Naxos recording La Magnifique: Flute Music for the Court of Louis XIV. The flute is such a ubiquitous instrument today that it is difficult to picture it as a new instrument with a small repertory, but that was exactly the situation at the end of the seventeenth century. The flute was new, fashionable, and a rarity, which is perhaps why Louis XIV enjoyed it so much in performances in his salon.

The first piece on the album, by Louis-Nicolas Clérambault, sets the tone of majesty, refinement, and elegance that defines the French court of the time. Despite its title, his Simphonia No. 7 in E minor, “Sonata detta La Magnifique,” is pretty much a trio sonata for two melody instruments and basso continuo. It’s first movement, as we’ll hear, takes the form of a French overture.

The Prélude to the Simphonia No. 7 in E minor, “Sonata detta La Magnifique,” was performed by flautists Barthold Kuijken, and Immanuel Davis with Donald Livingston and Arnie Tanimoto playing basso continuo.

At first, the flute was used almost exclusively to play smaller scale pieces, including songs published with melody and text with an ornamented version added for the flute. Here’s a lovely example, sensitively played by Barthold Kuijken accompanied by Donald Livingston and Arnie Tanimoto on the harpsichord and viola da gamba respectively.

Another world premiere recording, we heard Jacques Hotteterre’s “J’Ecoûtois autrefois” with its ornamented version, from his 1701 collection whose title translates as “A collection of serious airs and drinking songs.” The players were Bart Kuijken, Donald Livingston, and Arnie Tanimoto on the 2021 Naxos release La Magnifique: Flute Music for the Court of Louis XIV.

Let’s end with the last movement on the recording, a Petite Passacaille from The Second Suite of Marin Marais’ Pièces en trio of 1692.

Thanks to our studio engineer Michael Paskash, and our production team: LuAnn Johnson, Wendy Gillespie, and John Bailey. I’m Angela Mariani, inviting you to join us again for the next edition of Harmonia. 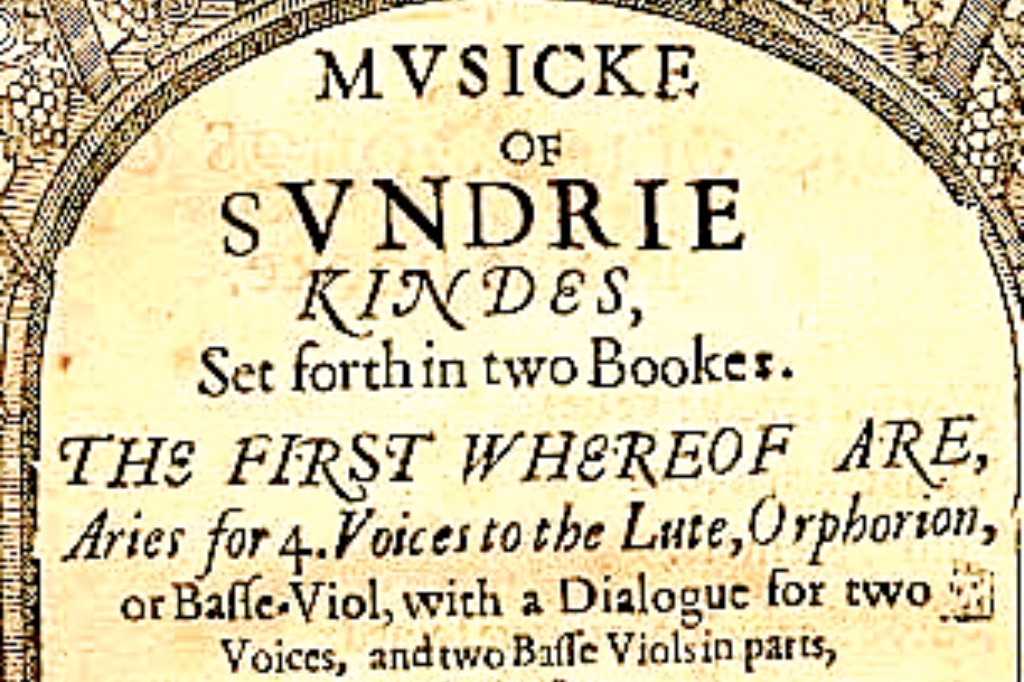 The turn of the seventeenth century was a great time to be a musician in England. Church, court, and theatre gigs abounded, as did patrons in spacious country homes, and the names of well-known performers and composers -- Byrd, Gibbons, Weelkes, Dowland…the list goes on and on. It would be all too easy to pass over Thomas Ford in such august company, but by doing so we would miss out on some fantastic music, so instead he is going to be the star of this episode, after which we’ll enjoy music from our featured recording, La Magnifique: Flute Music for the Court of Louis XIV, performed by Barthold Kuijken and friends.

A Gardin for Delights: English Lute Songs from The Renaissance by Ian Partridge
Ian Partridge, Konrad Ragossnig
Qualiton, 1990 / B01K8LA74O
Thomas Ford
Tr. 1 There is a lady (3:12)