Hats Off to Hamburg

Germany’s thriving port city of Hamburg has been a flourishing center of civic and church music-- and popular music too, for that matter-- for over a thousand years. Home to eighteenth-century heavy hitters including Telemann and C.P.E. Bach, the city nurtured generations of musicians. This hour, music from the city of Hamburg – and then later in the program, we’ll move from Hamburg down to Genoa, Italy, where we’ll hear lute music by Renaissance composer Simone Molinaro, and listen to the piece that inspired the opening of Ottorino Resphigi’s 1917 orchestral work Ancient Airs and Dances.

Telemann dominated the music scene in Hamburg for over forty years. He directed music at its five major churches, led the opera, taught, and published a considerable body of work. Telemann’s Brockes-Passion was performed for three Lenten seasons in Hamburg even before the composer took up his posts there. Barthold Heinrich Brockes’s text setting of the Passion was set by several baroque composers including Telemann, Handel, Johann Mattheson, and Johann Friedrich Fasch. We’ll hear the Sinfonia from Telemann’s Brockes Passion and an aria, “Mein Vater.”

Telemann wasn’t the only big-wig to work in Hamburg in the eighteenth century. Telemann’s godson Carl Philipp Emanuel Bach succeeded him in directing music at major churches in Hamburg. Like Telemann, many of [C.P.E.] Bach’s works were performed outside Hamburg—including two of his oratorios: The Israelites in the Desert and The Resurrection and the Ascension of Jesus. Having noticed the success of oratorio productions in the theaters of London at the time, Bach hoped The Israelites in the Desert would be performed [quote] “not only on a solemn occasion, but at any time, inside or outside the Church.”

In this recitative-aria pair, Moses’s brother Aaron pleads with the Israelites to refrain from complaining about their harrowing travel conditions, and rely on God’s protection.

“Honored be the will of the Eternal” and “He has brought you this far,” a recitative-aria pair from C.P.E. Bach’s oratorio The Israelites in the Desert. Tenor Samuel Boden performed with the Stuttgart Baroque Orchestra conducted by Frieder Bernius.

Welcome back! This hour, we’re strolling through the musical streets of Hamburg. There are few musical remnants of Hamburg’s ninth-century origins, when it became the seat of an archdiocese. With the onset of Lutheranism in the 1520s, much of Hamburg’s pre-Reformation musical traditions were destroyed.

Thomas Selle did much to increase the importance of music-making in Reformation Hamburg. During his tenure he garnered enough financial support to ensure regular musical celebrations throughout the year and secure dependable salaries for several singers. Since Hamburg was a thriving port city, it attracted musicians from afar—and their publications—as well as tradespeople and travelers. We’ll hear Selle’s motet “Videntes stellam magi.” The piece begins with a musical quote by Orlando di Lasso, whose music was widely available and fashionable at the time.

Thomas Selle’s successor as Music Director of the Main Church was Christoph Bernhard. It was a hard-earned job; Bernhard only won the city council’s approval by one vote. Still, the city’s leaders must have been excited for Bernhard’s arrival because they remodeled his house soon after. Bernhard dedicated his 1665 Sacred Concertos to the city council. We’ll hear “Aus der Tiefe” from part one of Bernhard’s sacred concertos.

Traveling now from Hamburg to Genoa -- we find the music of late Renaissance Italian lutenist and composer Simone Molinaro in our featured release, Molinaro: Danze e fantasie da intavolatura di liuto libro uno. Lutenist Ugo Nastrucci explores Molinaro’s music, written at the height of Genoese wealth. It was said that [quote] “Gold is born in America and dies in Spain, but it is buried in Genoa.”

Molinaro may not be a household name today, but his music inspired Ottorino Respighi, who reimagines Molinaro’s Canzone “Ballo detto il Conte Orlando” in a piece that opens his 1917 work, Ancient Airs and Dances. Let’s hear a little of the Respighi – it’s a fairly well-known work, and might be familiar to many of our listeners. 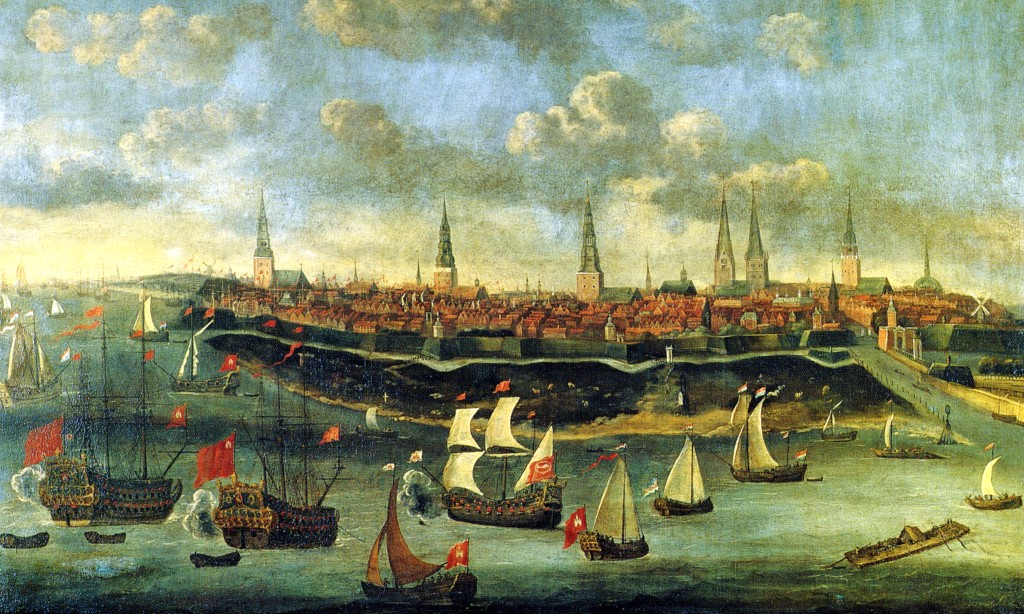 Germany’s thriving port city of Hamburg has been a flourishing center of civic and church music--and popular music too, for that matter--for over a thousand years. Home to eighteenth-century heavy hitters including Telemann and C.P.E. Bach, the city nurtured generations of musicians. This hour, music from the city of Hamburg; then later in the program, we’ll move from Hamburg down to Genoa, Italy, where we’ll hear lute music by Renaissance composer Simone Molinaro, and listen to the piece that inspired the opening of Ottorino Resphigi’s 1917 orchestral work Ancient Airs and Dances.