Welcome to Harmonia Uncut, the podcast that takes you to early music performances you might have missed. I’m Wendy Gillespie, inviting you to join me for a trip to Berkeley, California. We’ll set the time machine for the third of June 2008, when the trio Wildcat Viols are joined by three colleagues for an unforgettable evening of hard core, head-banging English viol consort music.

This is music composed for a domestic situation without internet or social media. One’s music room ideally contained a chest of six viols - two trebles, two tenors, and two basses. Someone attached to the household hand copied m­usic of two to six parts into sets of individual partbooks. The players might include the composer, the resident family and employees, guests – why, even King Charles I enjoyed a good consort session.

The marketing for this concert was inspired. The name of composer William Brade was affixed to the logo of the early 1970’s ABC sitcom The Brady Bunch, and an early television set - it’s kind of hard to describe - anyway they advertised the concert as “The Brade Bunch.” For those who have never heard of a viola da gamba but have heard of The Brady Bunch, you got the unmistakeable Brady Bunch logo, and who knows whom that might attract? The tv set conjures the consort “settes” of William Lawes, held close to the hearts of so many viol players…

The show opened, ever so appropriately, with music of William Brade, a pavan and galliard in 6 parts.

So, we’re talking high quality music played by people who really know what they’re doing and are enjoying themselves. Fantastic! Let’s plunge ahead into music of Orlando Gibbons, beginning with a trio for treble, tenor, and bass viols played by Joanna Blendulf, Julie Jeffrey and Elisabeth Reed, the Wildcat Viols.

From the brobdinagian great dooble bass to lilliputian trebles, Gibbons really knows how to compose a wonderful fantasia - here are Joanna Blendulf and David Morris.

And the set ends with one of Orlando’s masterful six part pavan.

Now that is a satisfying chunk of very fine music, and it is but the first of many such chunks in this concert. Unfortunately, time does not permit our hearing the whole concert, but let’s have are a few highlights - first, the touching and poetic “Draw on sweet night” of John Wilbye

The concert ended with music that Julie Jeffrey’s fabulous program note tells us is “the final word in consort music,” one of the Consort Setts (remember that television on the poster?) of William Lawes. The set begins with a fantasia that has earned the nickname “The Sunrise” - see whether you can hear why! The ayre that follows relates very closely to the fantasia. Julie describes Lawes’ musical language perfectly, “unsettlingly quirky and abrupt as it is sublime.”

We’ve been listening to a concert from 2008 that took place in Berkeley, CA, when six viola da gamba players performed a concert of masterpieces of English consort music, calling themselves “The Brade Bunch.” The players were Joanna Blendulf and David Morris, trebles, Julie Jeffrey and Farley Pearce tenors, and Elisabeth Reed and William Skeen, bass viols. Many thanks to Wildcat Viols for making this wonderful contribution to our podcast. 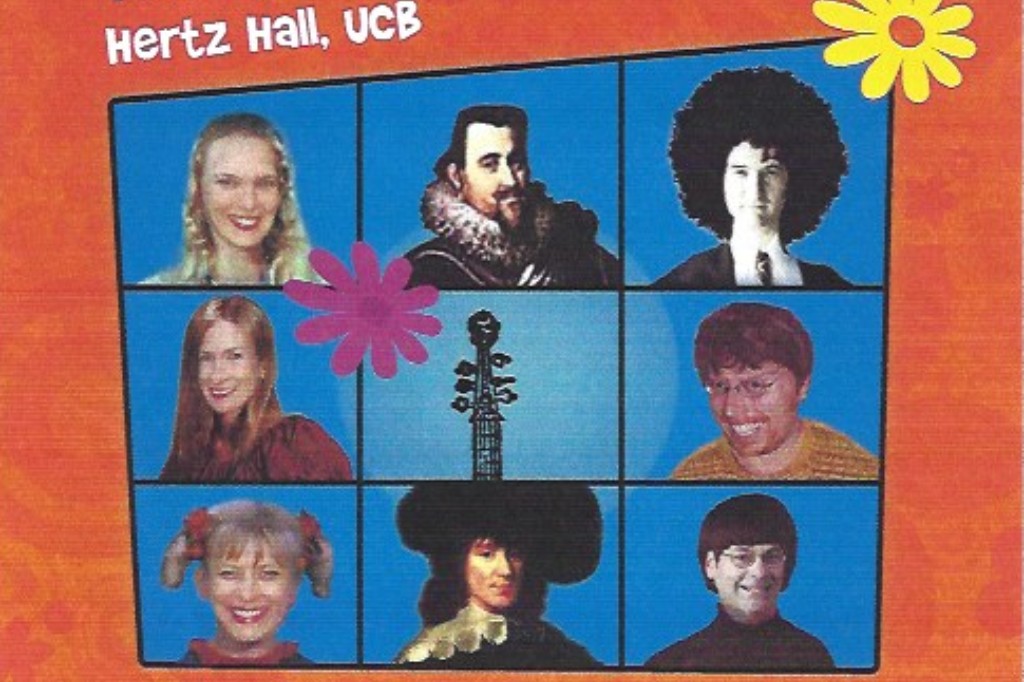 From the Brade Bunch concert poster.

Head-banging viol consorts - really? YES! Join "The Brade Bunch” in Berkeley, CA in 2008 for some of the best music that has ever been - fabulous music, made for real people to play together on the viola da gamba, and you get to listen to fabulous players having a great time playing together!