Hello, and welcome to Harmonia Uncut, the podcast that that brings you modern performances of early music – I’m Wendy Gillespie and for this episode, we’re traveling back to April 9, 2017 and the Historic Church of St. Peter in Cleveland Ohio to listen to Quire Cleveland, directed by Dr. Ross Duffin.

Many will be familiar with other settings of the Gospel of Matthew; this is the earliest one by a known composer, though admittedly a somewhat elusive one. Richard Davy, sometimes called “Davys,” contributed a good deal of music to the Eton Choirbook, the sole source of the piece.  There was more than one musician with that name in early C16 England, so details of Richard Davy’s life are not at all clear, but never mind - luckily, the music is what interests us.

Davy presents the story with what you might imagine as a trio of performers: the Evangelist (a higher voice) and the voice of Christ (a lower voice), both singing the Sarum chant version of the text; and a third voice , the so-called “synagoga” – basically everyone else - sings in 4-part polyphony. No accompaniment, a very spare texture, and lots of understated drama…

One excellent reason this particular Matthew Passion has not seen the light of day is that it is incomplete, since its sole source is missing its first two folios, which would mean the first four pages of music. Luckily, Ross Duffin has tons of musicological and artistic chops, coupled with a passion for the music and the confidence that allowed him to reconstruct a performing edition of the piece.

And there’s more! Duffin has set Davy’s music, not with its original Latin text, but to the nearly contemporary early English Gospel translation by William Tyndale. Duffin feels that this poetic text suits the spirit and the time of the music whilst simultaneously allowing listeners to hear a familiar story, albeit told in different words, in a language they can understand.

Here, then, is the opening of Davy’s St. Matthew Passion.  The synagoga begins with the exordium, the sort of “good evening everyone” section, and then we launch straight into the evangelist describing the scene with the crowd and Caiaphas, and we’ll pause about nine minutes later at the Last Supper.

We are listening to Quire Cleveland’s performance of Richard Davy’s St. Matthew Passion. I say that, but let’s stop for a moment to reflect. The Sarum chant is pre-existing: we are hearing an English translation set by Ross Duffin and not the Latin that Davy employed. About a fourth of the polyphony, including notably that we just heard, is missing completely, and another fourth of it comes to us in only in two of the four parts. Can you tell which bits are Davy and which are not? If so, it must make you feel very knowledgeable indeed! And if not, how cool is that? We can call it “reconstruction,” I suppose, but come on, Ross Duffin composed that polyphony - isn’t that extraordinary?

Let’s hear now how Davy ends the journey, now secure in the knowledge that this polyphony is his own. We’ll pick it up from where the soldiers lead Jesus to Golgotha, and we’ll listen all the way to the end of the composition, a very compact but dramatic journey of about 11 minutes, leaving us with a dignified, quiet image of two Marys at the tomb.

Quire Cleveland performed the Richard Davy St. Matthew Passion in the Historic St. Peter Church in April of 2017 under the artistic direction of Ross Duffin, with guests Owen Macintosh as the Evangelist, and Jeffrey Strauss singing the words of Jesus.

Many thanks to Ross Duffin for sharing this wonderful performance with us. Dr. Duffin, or perhaps I should, in this situation, say Maestro Duffin, has retired from Case Western Reserve University and gone to live near his grandchildren. Quire Cleveland continues under its new Artistic Director, the countertenor Jaye White, who has been singing with the choir since 2012. Jaye brings years of experience singing with major early music ensembles including eight seasons with the ensemble Chanticleer. We’re look forward to hearing a lot more from Quire Cleveland in the near future.

And we’re always interested in hearing your thoughts about anything you’ve heard on this podcast. You can find Harmonia on Facebook, or leave a comment or question any time by visiting harmonia early music dot org.  This has been Harmonia Uncut, and I’m WG, stay safe and thanks for joining me! 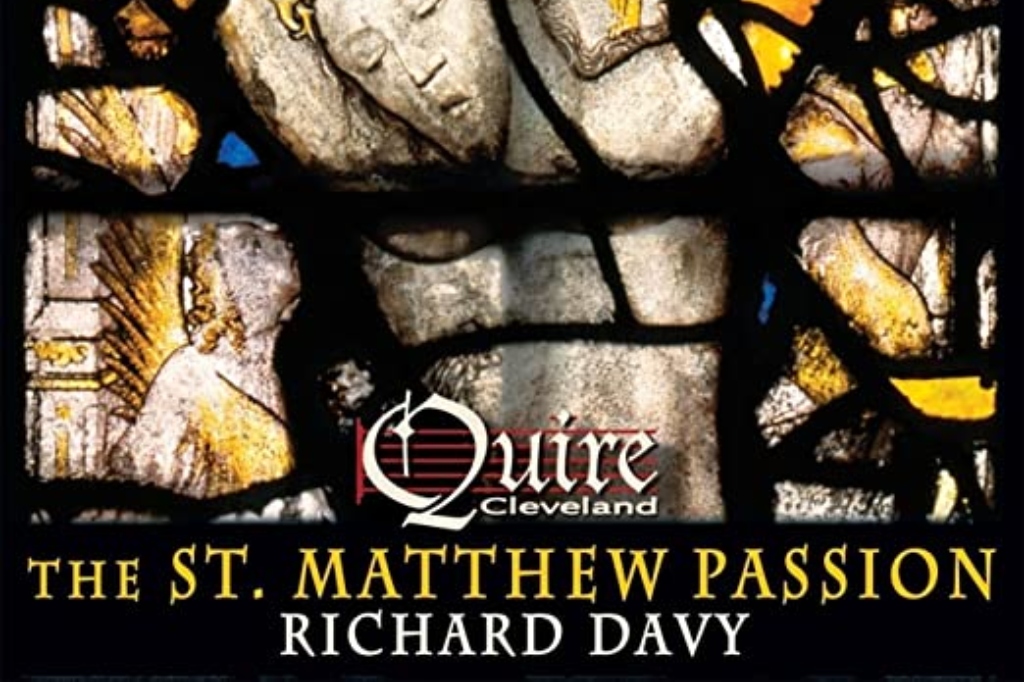 This particular Matthew Passion, the earliest one by a known composer, is incomplete; its sole source (Eton Choirbook) is missing its first two folios. Luckily, Ross Duffin has tons of musicological and artistic chops, coupled with a passion for the music and the confidence that allowed him to reconstruct a performing edition of the piece.