Welcome to Harmonia Uncut, the podcast that brings you performances of early music from the days of public concerts - long, long ago. I’m Wendy Gillespie, thanks for joining me.  It’s time to jump into our time machine and travel to Cleveland, Ohio in 2016, back in the days of live music.

We’re going to hear Quire Cleveland, - that’s with a Q U – the choir, I mean, not Cleveland!  Quire Cleveland is a professional early music vocal ensemble founded in 2008 by prize-winning musicologist Ross Duffin. The ensemble has made high quality recordings of live performances, mostly at Historic St. Peter Church, the oldest church building in Cleveland.

Let’s start with the familiar – well, familiar if you know the work of the Elizabethan composer William Byrd. In 2016 Quire Cleveland performed a concert they called “England’s Phoenix: William Byrd.”  Let’s listen to their interpretation of the best known and most performed of Byrd’s three so-called “Jerusalem” motets, Ne irascaris, Domine, whose words translate:

Be not angry, O Lord, still,
neither remember our iniquity for ever.
Behold, see, we beseech thee, we are all thy people.
The holy cities are a wilderness.
Sion is a wilderness, Jerusalem a desolation.

This motet, surprisingly, begins with a low and dark section derived from a secular piece of Philip van Wilder, the Flemish composer who worked for Henry VIII. By the second half, the “holy cities” part, a piece of incomparable poignancy emerges: the repeated cry of “Jerusalem,” the astonishing 54 entries on the words “desolata est.” and at least this listener hears distinct echoes of Lamentations of Jeremiah.

Perhaps the lamentable state of the world at the moment is making these texts have as much impact on us as they did on Byrd, if for different reasons. Speaking of Jeremiah… let’s just go the whole route and hear Byrd’s Haec Dicit Dominus, whose text…well…the text kind of says it all:

Yikes. That is pretty darn close to home right at the moment! (The moment is Wednesday, May 20, 2020. Just saying.)

Byrd’s Mass for Five Voices formed what Duffin calls the “golden thread” of the program, weaving it together. It might be surprising that a Catholic composer only composed three masses, especially if you compare it with his slightly older contemporary Palestrina’s 105 masses, but each one is incredibly special and individual. Listen to the way this one ends. The Agnus dei, the lamb of God, is beseeched to have mercy on us and grant us peace, providing Byrd with a perfect opportunity to capitalize on the words “miserere nobis” and let it all come to rest for “dona nobis pacem.”

There’s that unusual repeat of the first phrase of the third Agnus for rhetorical emphasis, not to mention the repeated “dona nobis pacem” that leads down to a calm ending and a reminder that it was a live concert performance and not a mass. (Slightly unnerving to hear applause, don’t you think?)

Well, there we have it, a fond reminiscence of going to concerts in beautiful spaces with beautiful acoustics and hearing professional choirs work with the acoustic to work magic and take us places we didn’t know existed!

Many thanks to Ross Duffin, the founder and Emeritus Artistic Director of Quire Cleveland, for sharing his musicological and musical work with the world and with us in such a beautiful audio experience. More than ever, we look forward to the day when, one way or another, we’ll once again be able to go to concerts and hear live music.

In the meantime, we’d be interested to hear your thoughts about anything you’ve heard on the podcast. You can find Harmonia on Facebook, or leave a comment or question any time by going to Harmonia early music dot org. This has been Harmonia Uncut, and I’m Wendy Gillespie, stay well, and please, join us again! 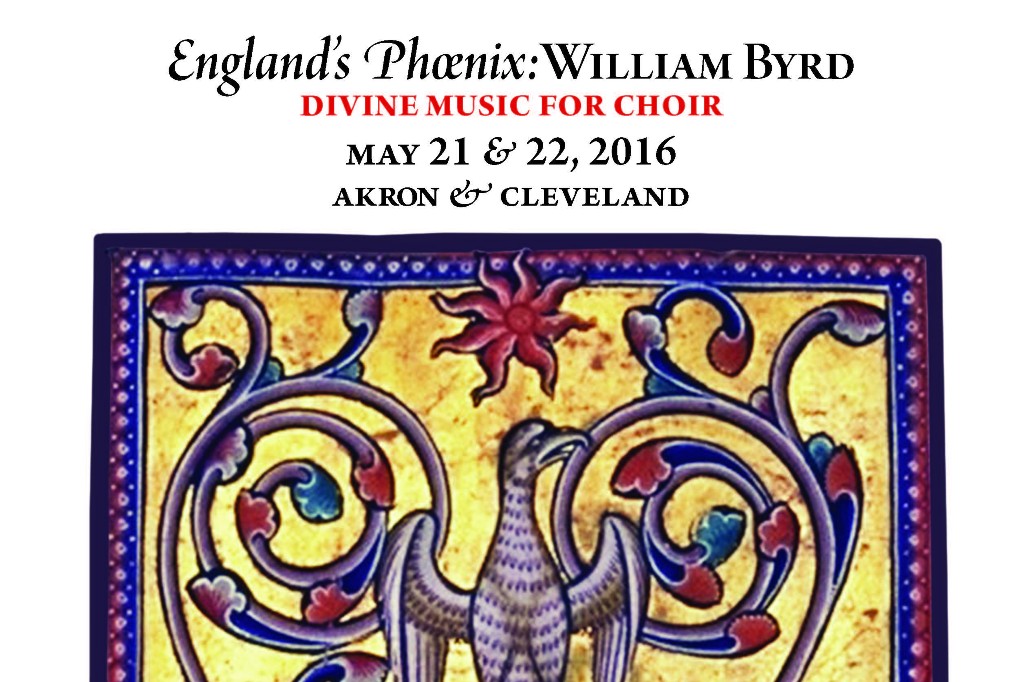 Detail from the concert program.

On this edition of the Harmonia Uncut podcast, it's a fond reminiscence of going to concerts in beautiful spaces with beautiful acoustics and hearing professional choirs work with the acoustic to work magic and take us places we didn’t know existed!... We'll hear music by William Byrd, performed by Quire Cleveland in a 2016 concert.