Welcome to Harmonia Uncut, the podcast that takes you to early music performances you might have missed. I’m Wendy Gillespie, inviting you to join me for a visit with the viol consort Phantasm during their 1999 US tour. The performance, alliteratively entitled “Flights of Fantasy and Fugue,” took place on April 6 of that year in Recital Hall at what was then the IU School of Music and is now the Jacobs School of Music, at Indiana University in Bloomington.

Here's a little aside: to give you an idea of just how much music there is in Bloomington, this was the 878th program of the 1998-99 season - and there was still more than a month left in the semester, prime recital season, when 10 concerts a day is not out of the question.

The program opened with music of John Jenkins, a prolific composer whose long life spanned a large part of the seventeenth century. We’ll hear 5 short pieces with the titles “An Ayre,” “Fantasy,” “Coranto,” “An Ayre,” and “Fantasy.”

“These pieces by Francois Roberday are somewhat unusual. We're playing them essentially because they're a fascinating collection of fugues that are written in open score format and the composer took the trouble to say that they're particularly suited not only for organ performance, but also for performance on viols and with our cheek in doing some pieces Bach’s Art of the Fugue later in the program, we thought this would set an interesting precedent.”

We heard Phantasm play three fugues by Francois Roberday: the first one was based on a Ricercar by Froberger and the second was complemented by a “Caprice on the same subject.”

We’ll move now to two fantasias of Henry Purcell from a collection that survives in a single autograph copy, with each piece specifically dated in 1680, when Purcell had achieved the ripe old age of 21. They crown a very rich history of fantasias that goes back to the late 16th Century, though to be completely honest they do not specify for what instruments they are composed. And if truth be known, in the right hands these pieces sound absolutely wonderful on a quartet of saxophones! Just saying.

That was Henry Purcell’s 4-part Fantasias numbers 6 and 5. By now, our ears are as accustomed as they are likely to get to listen to four individual voices having a conversation, and we are ready for some of Johann Sebastian Bach’s Art of Fugue, another conversation for four voices, this one dating from the end of Bach’s life, and in fact left unfinished at his death.

The viol quartet Phantasm, directed by Laurence Dreyfus, is unlikely ever to be accused of a lack of energy! We heard three of the extraordinary compositions of JS Bach’s Art of Fugue, all of which are based on a single 12-note subject. The members of Phantasm, from bottom to top, were Markku Luolajan-Mikkola, Jonathan Manson, Wendy Gillespie, and Laurence Dreyfus, and they were playing in Recital Hall of what is now the Jacobs School of Music at Indiana University, Bloomington in April of 1999. (In the interest of full disclosure, that is the same Wendy Gillespie whose voice you hear right this minute.)

Many thanks to our friends at the William and Gayle Cook Music Library for very kindly digitizing a reel-to-reel tape –[ remember those?] - for our use.

Please feel free to share your thoughts about this podcast if you feel so inclined.  You can find Harmonia on Facebook, or leave a comment or question any time by visiting harmonia early music dot org.  This has been Harmonia Uncut, and I’m WG, thanks so much for joining me! 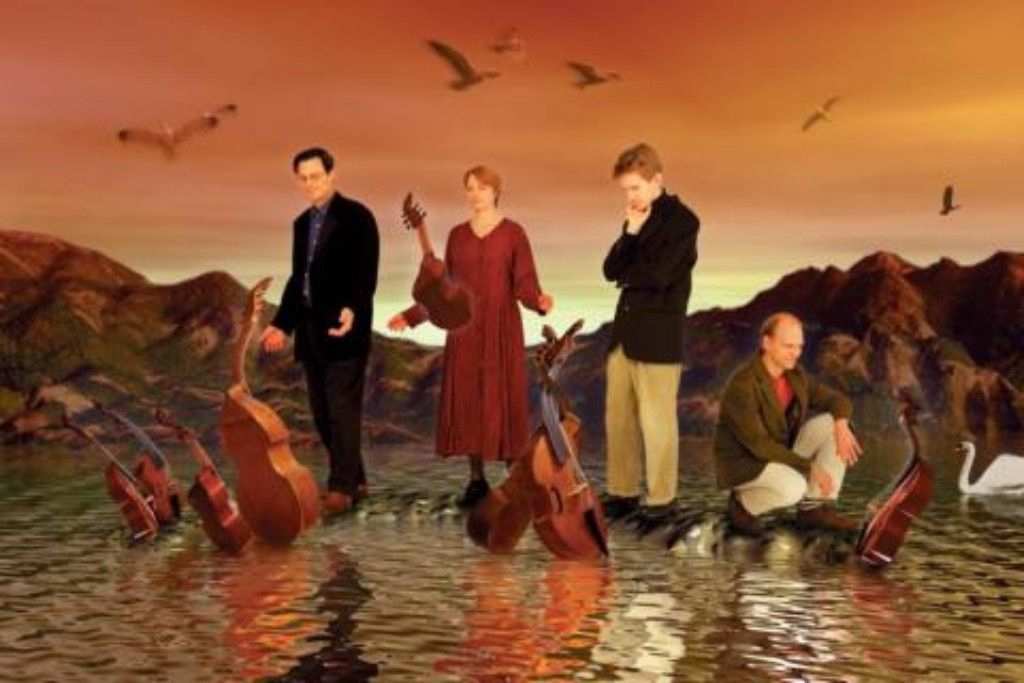 In this episode of Harmonia Uncut, the viol consort Phantasm takes us on flights of fantasy and fugue from their 1999 U.S. tour. We’ll hear music of Jenkins and Purcell that one is not surprised to hear on viols, but we’ll also hear fugues of Francois Roberday and J.S. Bach that are more adventurous, some might even say a bit cheeky, to play on a quartet of violas da gamba.