Hello - welcome to Harmonia Uncut, the podcast that that brings you modern performances of premodern music – I’m Wendy Gillespie, and - sshhhhhh!!! - we’re walking into First Congregational United Church of Christ in Kalamazoo, MI. It’s November of 2019, and the ensemble Schola Antiqua is presenting a program entitled “Jerusalem 1000 –1400: Sounds of faith in medieval Jerusalem.”

There is an audience in the church, and the event is listed as a concert, but walking in, what is this we’re hearing? A traditional Muslim call to prayer, in a church in Michigan. An unusual beginning to a concert, but of course the title is “Sounds of faith in medieval Jerusalem,” so forget about that old “early music means European music” idea.  But wait – something else joins in – Psalm 114, the one about Israel going out from Egypt, sung in Hebrew and then, in Latin, a processional for Saint Hilarion, honored particularly in the Byzantine tradition.

It’s a bit as if we were wandering through Jerusalem taking in the local sounds. This heterophonic symphony is what artistic director Michael Anderson describes as a “signature element” developed by the program’s curator, who is also a tenor in the ensemble, Matthew Dean. Hearing female voices so prominently in religious music might seem provocative, but instead we are encouraged to consider them echoes of practices, some now forgotten, that were part of the cross-pollinization in medieval Jerusalem. Certainly, a dramatic beginning to an adventurous program.

All the major religions that were born in Jerusalem gradually spread for all sorts of reasons. Sephardic Jews escaping their expulsion from Jerusalem took their traditions from Portugal to the Ottoman Empire. Their language, Ladino, or Judeo-Spanish, is considered the best preserver of some early Jewish texts. Let’s hear special guest Nell Snaidas tell us about and sing a one of these songs that were traditionally preserved by the women, and then Schola Antiqua join her for another that wishes joy and prosperity to the bride who has no riches or dowry.  Guest oud player Amro Hosny Helmy adds his own magic to the proceedings…

Schola Antiqua, with guests Nell Snaidas and Amro Hosny Helmy, perform traditional Sephardic music found throughout the south of Europe and Asia in the middle ages. Now to a reflection on what developed in the early years of the medieval Cathedral of Notre Dame in Paris, transforming traditional monophonic chant into a framework underlying virtuoso, ecstatic bursts of melismatic polyphony combined with almost dance-like duets. Its text, from the Old Testament book of Isaiah, says, “Arise, shine [O Jerusalem]; for thy light is come, and the glory of the Lord is risen upon thee.”

Schola Antiqua sang a text from Isaiah set in the style of polyphony that was born with the Cathedral of Notre Dame in Paris.

To end our visit, how can one resist the opportunity to hear William Byrd’s allegory for the Catholic troubles in Elizabethan England, again    the words of Isaiah, this time on the decimation of the holy city of Jerusalem. Ne reminiscaris is a powerful, mournful piece that brings together this thoughtful, evocative program, and we’ll let the performance end as Schola does, with a tradition nasheed of peace led by Amro Helmy, who also sings!

Many thanks to Richard Anderson, the Artistic Director of Schola Antiqua, for sharing this unusual and atmospheric performance from November 2019 with us. We look forward to more exploration of the diverse musics that cross cultural divides, and remind us of the things that unite us and look forward to Schola Antiqua’s continued explorations wherever they lead.

And we’re always interested in hearing your thoughts about anything you’ve heard on this podcast. You can find Harmonia on Facebook, or leave a comment or question any time by visiting harmonia early music dot org.  This has been Harmonia Uncut, and I’m Wendy Gillespie, stay safe and thanks for joining me! 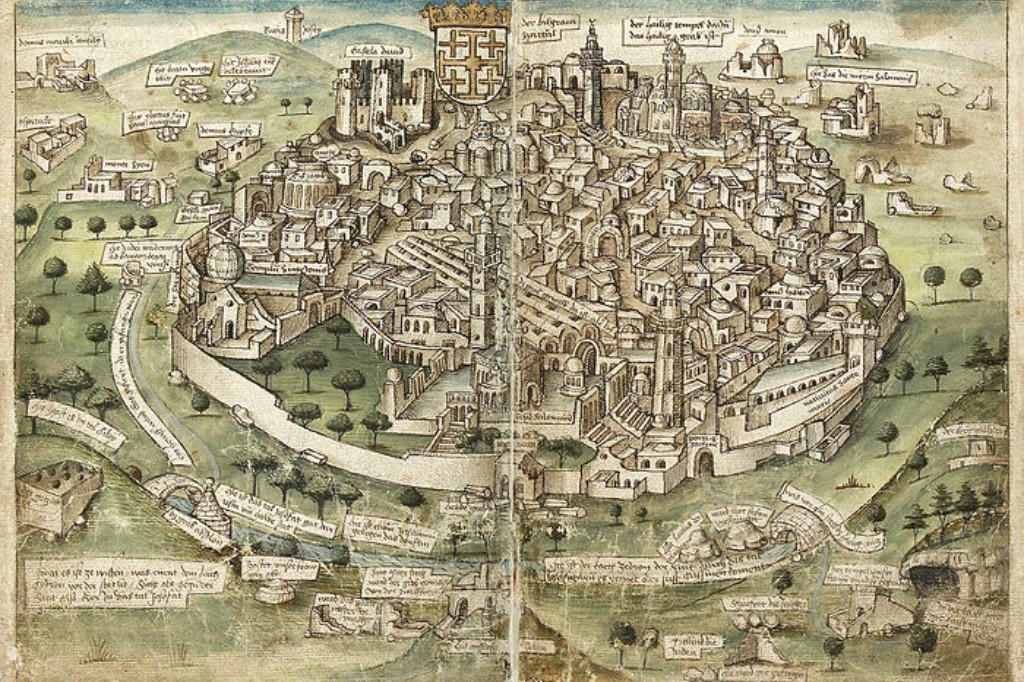 Schola Antiqua, literally “The Old School,” is the name of a Chicago-based early music ensemble that collaborated with an exhibition at the Metropolitan Museum called Jerusalem 1000-1400, subtitled “Every People under Heaven.” Listen as Hebrew, Islam and Christian traditions overlap and diverge as they spread around Europe and Asia.