Welcome to Harmonia Uncut, the podcast that takes you to early music performances you may have missed. I’m your host Wendy Gillespie, and today we’re travelling back to February of 1986 to hear the first faculty concert of the young Early Music Institute, at the Jacobs School of Music, in Bloomington, Indiana. Here’s an amusing piece of history, something that could never happen now, of course! Thomas Binkley, tasked with building a core faculty for the Institute, cleverly managed to engineer jobs for three males with spouses who were musicians. The spouses in question could then contribute all they wanted without the pressures of a tenure-track, full time job with benefits. (If you heard the slightest tinge of irony in that, it just might be because your host was one of those “two-for the price of one!” hires.)

The Early Music Institute was intended to be a professional training ground for players of medieval, renaissance, and baroque music, so the first faculty concert was to be a mishmash of all sorts of repertory presented in more or less chronological order, starting with a medieval set . We’ll hear three anonymous songs: the English Prisoner’s Prayer, followed by Veris dulcis in tempore from Carmina Burana, then  Dum inventus florui, and the set ends with Ciaramella, me dolce Ciaramella by Antonio Zachara da Teramo. As you’ll hear, the performers reach out to their somewhat mystified audience with translations of the texts.

Paul Elliott was the new early music voice teacher, Thomas Binkley played his chitarra sarusenica, and yours truly takes responsibility for the vielle playing in the medieval set.

The program continues on its European tour, eventually making its way to seventeenth-century Italy, a particular favorite of the rest of the faculty. We’re going to hear Elisabeth Wright play a Frescobaldi Toccata in D Minor, then Stanley Ritchie, Eva Legene, and yours truly join her for a Fontana Sonata in D Major.

The last piece on the program, as was the custom in 1986, involved everyone and is taken from Luigi Rossi’s Orpheo of 1647. As you’ve already heard, the idea of including a bowed bass instrument had luckily not yet been declared inappropriate to seventeenth-century Italian music, otherwise the entire faculty wouldn’t have been involved. This is Lasciate averno from Orpheo. Listeners may know that the story of Orpheus and Euridice doesn’t end well, and after Orpheus loses his bride, he responds with Lasciate Averno, inviting death to claim him as he has now lost all.

We’ve been listening to excerpts from the very first faculty concert of the Early Music Institute at the IU School of Music in Bloomington, Indiana, now known the Historical Performance Institute of the Jacobs School of Music. The performers were the singer Paul Elliott, violinist Stanley Ritchie, Eva Legêne on recorder, Thomas Binkley on chitarra sarusenica and lute, Elisabeth Wright on harpsichord, and your humble servant on vielle and viola da gamba, and the year was 1986. Many thanks to the IU Music Library for kindly digitizing a reel-to-reel tape in order to resurrect this event.

We’re always interested in hearing your thoughts about this podcast. You can find Harmonia on Facebook, or leave a comment or question any time by visiting harmonia early music dot org.  This has been Harmonia Uncut, and I’m Wendy Gillespie, thanks very much for joining me! 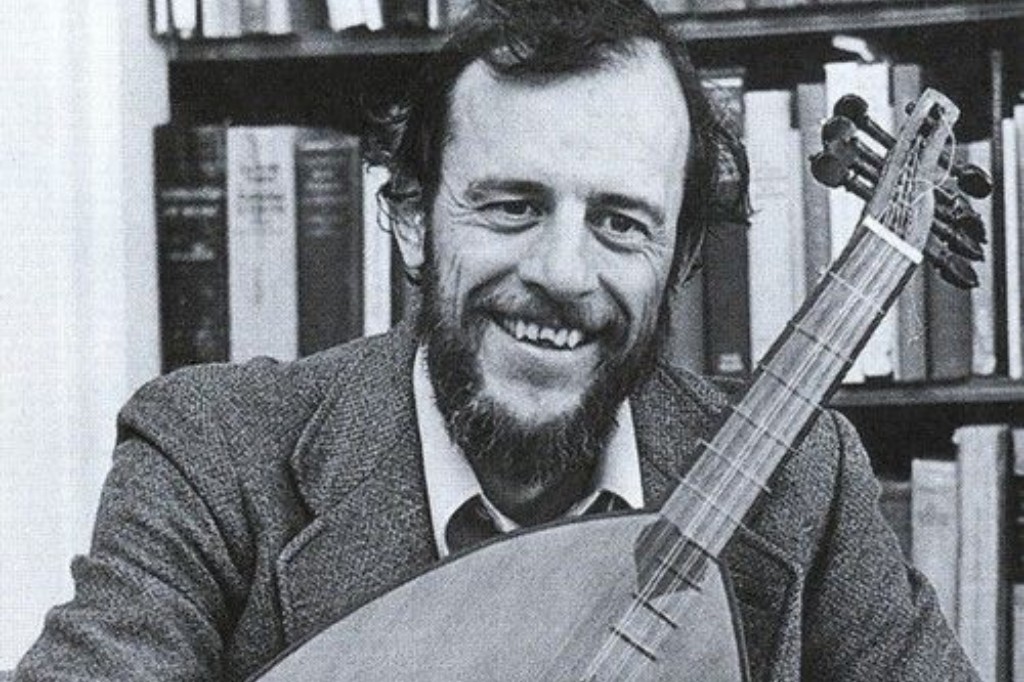 Thomas Binkley founded the Early Music Institute at IU School of Music in Bloomington, Indiana in 1980. His mission was to build a core faculty to train professional musicians studying early instruments and voice, and he built the resident faculty up to six in six years, an astonishing tribute to his political acumen. In its first year, the newly acquainted faculty presented a debut program to a somewhat mystified, but enthusiastic Bloomington audience that included 12th through 17th century European music. The Institute, now the Historical Performance Institute is still going strong, thanks to its founder’s vision and the efforts of that early faculty, and today early music is a staple of Bloomington’s cultural scene.