Hello, and welcome to Harmonia Uncut, the podcast where you can hear modern performances of very old music. I’m Wendy Gillespie, and we’re about to hear a 40-year-old performance of 600-year-old music at New York City’s Corpus Christi Church on the series Music Before 1800. The performers are the Elizabethan Enterprise and friends. The EE disappeared from the concert scene in the early 1980’s, though not before having won a debut at Carnegie Recital Hall in the Concert Artists Guild competition for emerging ensembles - a very unexpected honor for an ensemble that despite its name was performing late medieval music.

While the name Elizabethan Enterprise is likely unfamiliar to most, early music enthusiasts might possibly recognize names like Julianne Baird, Judith Malafronte, Barbara Thornton, Peter Becker, Benjamin Bagby, Lucy Cross and David Hart, all of whom are heard here as members or friends of the EE when they were themselves emerging young artists.

To give you the sense of immediacy that can only happen in live performance, I’m going to start by playing you a motet by Johannes Ciconia called O Padua, a song praising that beautiful Italian city. Listen carefully at the end of the song and you will hear the name of the composer.  But before you hear the motet, listen to Lucy Cross give a verbal prelude to the music.

Johannes Ciconia’s O Padua, performed by the EE and friends.

Persuading a modern audience that early fifteenth century music is relevant and fabulous was a challenge that the ensemble addressed in part by reaching out to their listeners with spoken texts that relayed the sense of the words and the form of the piece without being dry, literal translations. Here’s an example – Guillaume Dufay’s isorhythmic motet Supremum est mortalibus bonum pax, written expressly for the signing of the Treaty of Viterbo in 1433, when Pope Eugenius IV and King Sigismund of Bohemia were both present at the ceremony.

Dufay’s Supremum est mortalibus bonum pax, performed by the Elizabethan Enterprise and friends in 1979. Lucy Cross was the maker of the poems, always conveying the spirit and often the rhyme and meter of the original text.

Let’s end with one more piece from the concert, this one another isorhythmic motet, but this time by the mysterious Johannes de Sarto. composed on the death of the Hapsburg Prince Albrecht II in 1439, the tenor part contains the opening of the Mass of the Dead, Requiem eternam, while the rest of the text first praises Albrecht for his noble, wise and pious qualities. Then the royal cantors, mentioned by name, including Sarto, are urged to sing to Christ and ask his mother Mary to help Albrecht. The wish that the king should find eternal peace and fame frames the text.

That was Johannes de Sarto’s Romanorum rex, performed by the EE and friends at Corpus Christi Church in NYC in 1979.  The singers were Julianne Baird, Judith Malafronte, Barbara Thornton, Peter Becker, Harlan Hokin and Benjamin Bagby. The instrumentalists were Lucy Cross, David Hart and – ok, I’m busted – yours truly, desperately missing Mary Springfels, who had the measles!

We’d be interested to hear what you think about anything you’ve heard on this podcast. You can find Harmonia on Facebook, or leave a comment or question any time by visiting harmonia early music dot org and clicking on "Contact." This has been the Harmonia Uncut podcast, and I’m WG, thanks for joining us. 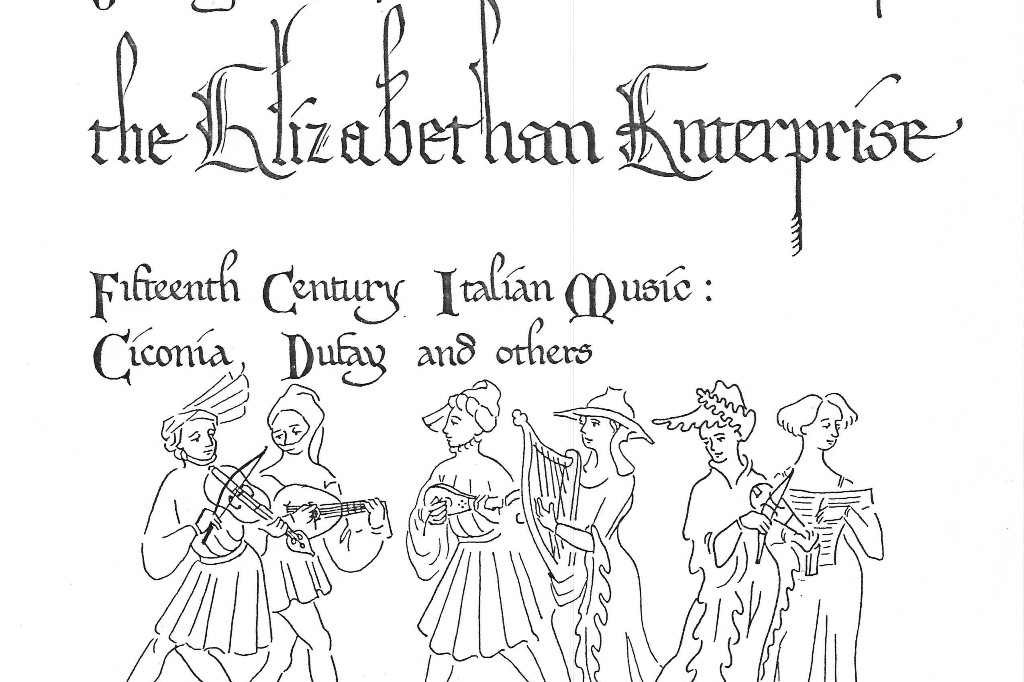 Ah, time travel! Today’s podcast revisits Music before 1800 in New York City in January of 1979 to bring you excerpts from a concert of fifteenth century Italian music performed by a group of young professionals going under the name the Elizabethan Enterprise. The concert was a labor of love performed by passionately interested performers, many of whose names may be familiar to early music enthusiasts. You’ll hear Ciconia, Dufay and Johannes de Sarto.