Welcome to Harmonia Uncut, a podcast that takes you to performances of early music that you might have missed. I’m Wendy Gillespie, inviting you to join me for a journey to sunny California in May of 2019—goodness, that feels like a long time ago!—to attend a concert on the San Francisco Early Music Society series.

The ensemble Antic Faces is presenting “Joyne Hands - Elizabethan entertainments for mixed consort,” in which they treat us to a variety of instrumental combinations, notably the rarely heard ensemble they call the Consort of Six. Elsewhere, this combination is referred to variously as the Broken Consort, or Morley Consort. (Back in the 1960’s, we thought of it as The Julian Bream Consort!) Whatever you call it, the consort comprises six unlike instruments, three of them plucked, three sustaining, all playing together - a very different sound than a consort of like instruments.

A significant repertory survives from the seventeenth century for this specific combination, but two of the plucked instruments, the bandora and cittern, are fretted, wire-strung, chordal instruments that do not, as it were, grow on trees. Two members of Antic Faces who specialize in the viola da gamba had recently acquired a cittern and a bandora for that exact reason, and this is their debut performance on those instruments.

The opening set of Antic Face’s concert presents this classic consort of six. Antic Faces do not stand on ceremony, and they’re already onstage tuning when it’s time to start, so, as you’ll hear, they dive straight into My Lord of Oxenford’s Masque by William Byrd; then, with no messing around, they go  straight into another Thomas Morley arrangement, this one The Bachelor’s Delight by Richard Allison; and the set ends with the ensemble’s own arrangement of John Johnson’s The Queens Treble.

The rest of the concert featured violin, flute, lute, and three viols. Here’s a set that begins with Alfonso Ferrabosco Jr.’s “Four Note Pavan.” In it, you’ll hear four notes played in several different keys over and over by the flute, with four other parts a rolling polyphonic sea on which they float. It is followed by a four-part Orlando Gibbons fantasy that demonstrates how the right violinist can fit perfectly with a consort of viols; and then the lute segues into the band’s own arrangement of an anonymous piece entitled “Arthur’s Dumpe.” [I’m sure I just heard a snicker…a-hem - it turns out that a dump might well be a funeral piece, the kind of thing that puts you “down in the dumps” (in C17 France, they called this a tombeau), and this one is a tombeau for someone named Arthur.]

OK, it might not seem quite as rhetorically charged as a tombeau, but that was the anonymous “Arthur’s Dumpe.” It was preceded by a Gibbons fantasy and began with Alfonso Ferrabosco II’s “Four Note Pavan.”

We’ve been listening to a concert from the 2018-19 San Francisco Early Music Society series by the ensemble Antic Faces. The performers are Shira Kammen, violin; Mindy Rosenfeld, flute; David Morris, bass viol; John Lenti, lute; Julie Jeffrey, cittern and tenor viol; and Peter Hallifax, bandora and bass viol. Many thanks to Antic Faces for sharing this entertaining music with us! 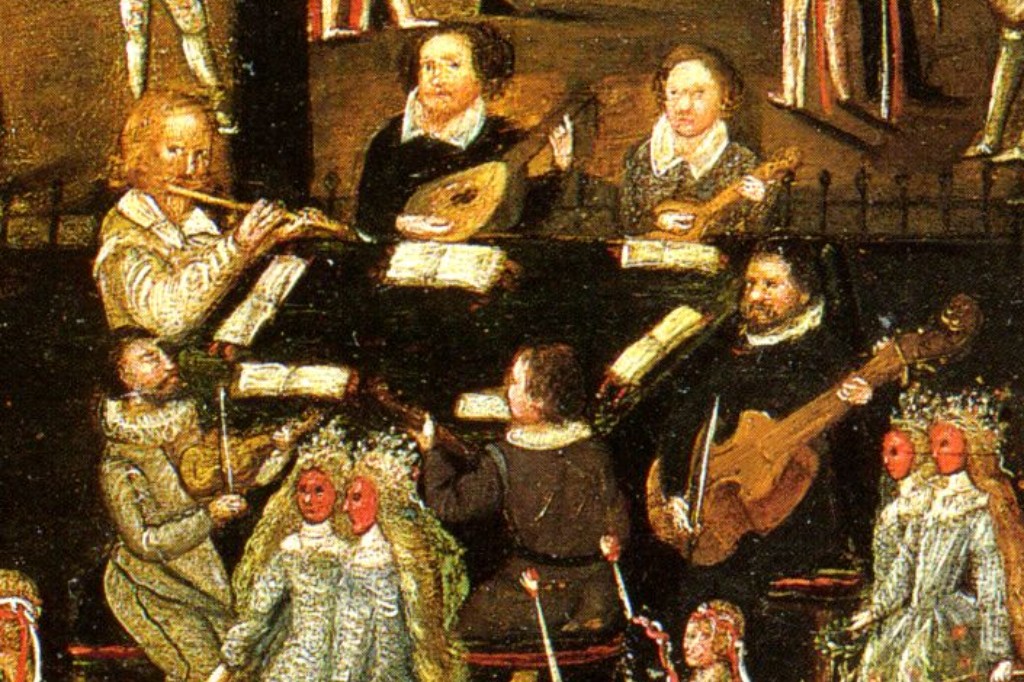 Broken consort depicted within a narrative portrait of Sir Henry Unton (c. 1558-1596) by an unknown artist.

The performers calling themselves Antic Faces mix some of the busiest early musicians in the US with people who have a day job. All are thoroughly professional musicians who joining together to play arrangements of well-known Elizabethan tunes mixed with serious secular polyphony in this 2019 concert entitled "Joyne Hands - Elizabethan entertainments for mixed consort."