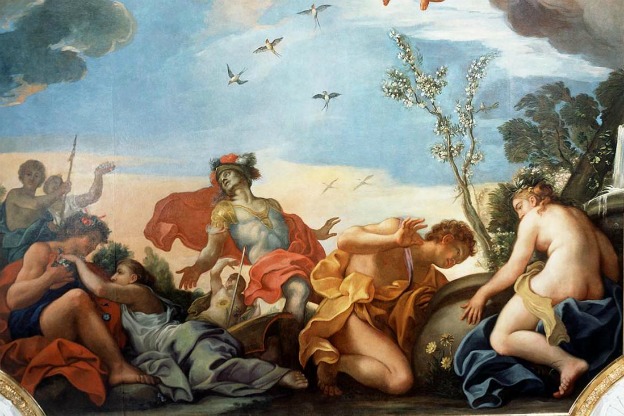 Siemiginowski’s Allegory of Spring is one of four paintings that depict the seasons, none of which are intended to hang on a wall. They are, in fact, ceiling paintings created in succession during the 1680’s for the King of Poland. They adorned his and his queen’s private quarters at the Royal Palace in Warsaw.

Allegory of Spring depicts the most optimistic season of year, which follows the dreariest.

Although a single scene, the painting can be divided into two halves—the bottom shows an earthly setting, while the top is a surreal event in the sky (but more on than in just a minute).

The scene on the ground is populated with a few men and women who appear to be in a state of frozen animation, as if captured in celebration. Many varieties of flowers have popped up on trees and from the ground. Flowers are also held up by people and can be clearly seen adorning their hair. There’s no question that Spring has arrived and is here to stay (at least for a while).

Small birds lead the viewer’s eye upwards to the admittedly surreal event happening above. Floating in the sky at the center of the painting is a woman clothed in flowing swaths of pink and green cloth. Her bosom is exposed, but because her body is turned away, she retains a sense of modesty. Nevertheless, she faces the viewer and looks him in the eye.

In both hands she holds flowers. And like the earthly revelers, flowers adorn her hair.  Two winged babies, traditionally called putti in Italian, hold up a woven basket of more flowers for her to spread around.

Dark clouds appear to the right and left of the personification of Spring.  However, it’s clear that her actions are making them dissipate.  Two other winged babies help by confronting one of the clouds, which has a human head sticking out of it. One baby is pulling its hair while the other puts his little hand over the cloud’s mouth. There will be no more cold wind coming from this cloud.

More information about this recording: Sound out my voice! Italian madrigals and bastarda music for viol consort