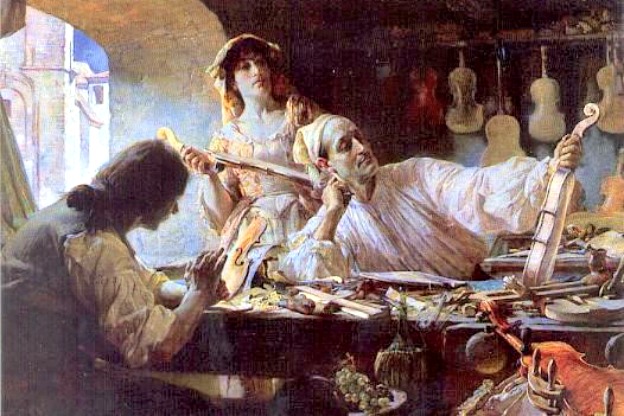 Antonio Vivaldi’s nickname “the red priest” is well known, but his fame rests on his success as a composer.  In fact, in 1715, while teaching and composing at the Ospedale della Pietà in Venice, Vivaldi pleased his employers so much that they gave him a bonus to his salary! But another priest-composer, Francesco Antonio Bonporti, wasn’t so lucky. In a letter to the secretary of the Elector of Mainz written in 1715, Bonporti did the opposite of asking for a raise.  In fact, he offered to work for free for one year in exchange for an appointment as chaplain to the emperor at Vienna!  Bonporti’s compositions are often overlooked, but many believe they were influential on the style of J.S. Bach.

Imagine Vivaldi or Bonporti or Bach’s music played on one of Antonio Stradivari’s violins. Many point to 1715 as the year when Stradivari reached the pinnacle of his so called ‘golden period’ of instrument making. While Stradivari didn’t distinguish his instruments with names, many have since been named after their players or owners. One famous Strad, known as the ‘Alard’ was made in 1715, and is regarded by some experts as one of his finest. Oscar Shumsky, an American violinist who passed away in the year 2000, performed on another famous Stradivari violin made in 1715 called the ‘Ex-Pierre Rode’ or the ‘Duke of Cambridge’.

Irish-born playwright Newburgh Hamilton premiered his five-act comedy, The Doating Lovers, in England in 1715. In the same year, he also revived a previous work—his farce called The Petticoat Plotter.  The two plays enjoyed only limited popularity, and perhaps Hamilton would have faded out of the public eye almost entirely had it not been for his friendship with composer George Frederick Handel.  Handel and Hamilton collaborated as librettist and composer for large scale vocal works; Handel composed the music and Hamilton provided the texts.  This association was fruitful: together they produced the ode Alexander's Feast, as well as Samson, and the Occasional Oratorio.

Back in France, 1715 marked the year of Louis XIV’s death. The so called “Sun King” enjoyed a long reign, during which he employed many musicians. One of these was Antonio Bagniera.  Born in 1638 (the same year as Louis XIV), Bagniera began singing in the royal chapel choir as a young boy. After undergoing castration to prevent his voice from changing, Bagniera eventually joined the ranks of other Italian castrati employed by the King.  Bagniera spent most of his life at court, not retiring until the King's death in 1715. What’s more, during a time when life expectancy was certainly not as optimistic as it is today, Bagniera lived to the ripe old age of 102!

Music heard in the time capsule: