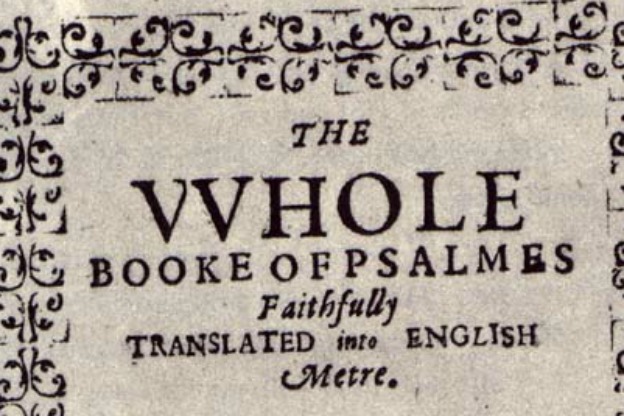 It’s a pity that no works by the Swiss composer, Esther Elizabeth Velkiers survive. Born in 1640, and blinded in a childhood accident, Esther didn’t let that hold back her education. She learned to read with a wooden alphabet and studied language, philosophy, theology and mathematics. She also took up music, and from German lexicons we know that she was an adept singer and harpsichordist.

We’re more lucky in the music that’s come down to us from another composer born in 1640, Carolus Hacquart. He is known for his set of ten sonatas collected in Harmonia parnassia, and for his De Triomfeerende Min or The Triumph of Love, a work which is sometimes credited as being the first Dutch opera.

Love may have very well triumphed when in 1640, another German composer and organist, Franz Tunder married Elisabeth Voigt. By the next year, the newlyweds had moved to Lübeck, where Tunder landed a job as organist of the Marienkirche. Franz and Eilsabeth had five children; their third child, Anna, eventually married Franz’s successor at the Marienkirke, the famous organist, Dietrich Buxtehude.

Aside from marital bliss, 1640 was also the year of a bitter feud.  Robert Ballard ran a printing business in France and so did the Sanlecques family. But Ballard wanted a corner on the market and took the Sanlecques to court to try to get their printing rights revoked. The legal proceedings, which started in 1640, were long and drawn out with the preliminary measures alone lasting over eight years. The Sanlecques continued printing throughout the dispute, but in the end no clear decision was reached.

Other notable publications were coming out all over Europe in the year 1640: In Germany, the poet Philipp von Zesen published his first work called the Hochdeutscher Helicon; in Italy, Nicolò Farfaro,  under the pseudonym Giorgio Mazzaferro, published his Discorso sopra la musica antica, e moderna; and in England, Edmund Chilmead came out with his Treatise of the Essence, Causes, Symptoms, Prognosticks, and Cures of Love or Erotique Melancholy from Dr James Ferrand’s Erotomania…

Across the pond, it was a groundbreaking year for printing in the British North American colonies as well. In 1640, the Bay Psalm Book—the standard psalter used for church services in the Massachusetts Bay Colony— was one of the first items to come off the printing press brought over from England two years prior. The hymn book, newly translated from the Hebrew scriptures by a committee of ministers in the colonies, gave the Puritan community its own religious text as they began building their identity in the New World.

A locksmith, Stephen Daye produced 1,700 copies of the Psalter, but today only 11 copies remain, two of which are owned by Old South Church in Boston, which has counted Samuel Adams, Benjamin Franklin and Phillis Wheatley among their prominent members.  In December of 2012 Boston's Old South Church voted to sell one of its copies of the 1640 Bay Psalm Book, hoping by all estimates to make 10 to 20 million dollars from its sale at auction. The church plans to use the money for building restoration and repairs and its ongoing service to their urban community.