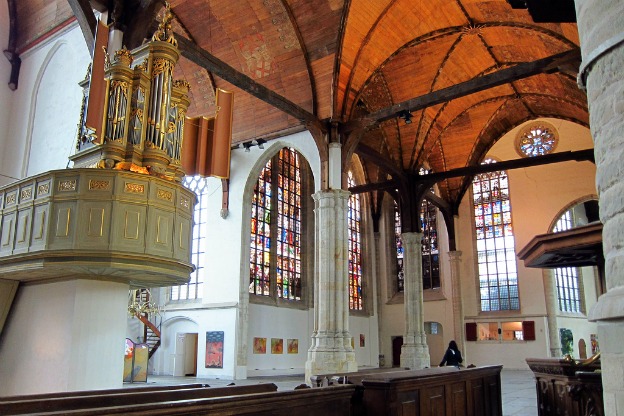 In Venice, one of the 16th century's most influential composers died.  Adrian Willaert served as organist, choirmaster, and composer at St. Mark's basilica for thirty-five years, and cultivated a style of writing for cori spezzati, or “separated choirs.”  The sonic effects of Willaert's innovative compositions were emulated by succeeding musicians at St. Mark's, such as Cipriano de Rore and Andrea Gabrieli.

The year 1562 also marks the births of composers John Bull and Jan Pieterszoon Sweelinck.  Bull and Sweelinck became acquainted while the former was exiled in Flanders.

By then, Bull was the bearer of a doctorate degree from Oxford University as well as the brunt of suspicion for the crimes of forced entry, adultery, and fathering a child out of wedlock.

Sweelinck was an employee of the Oude Kirk in Amsterdam whose improvisational skill earned him the informal title of “the Orpheus of Amsterdam.”

The two musicians inhabited an environment that was flourishing from Amsterdam's pivotal position along worldwide trade routes.  During the early 17th century, a time now referred to as the city's Golden Age, Amsterdam's wealth was unparalleled.

In Padua, Italy, a famous anatomist and physician died in 1562.  Gabriele Falloppio made major contributions to the field of medicine.  While much of his own work dealt with the anatomy of the head, he is well known for his research in human sexuality, including a treatise on syphilis, which advocated the use of the condom as a means of protection from the disease.