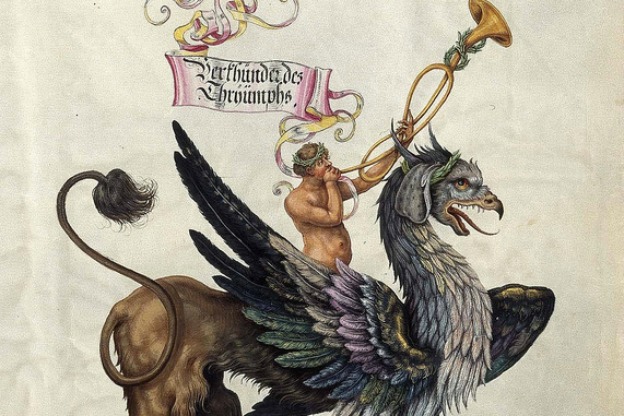 Hapsburg Emperor Maximilian I commissioned a series of 218 prints from German painter and printmaker Hans Burgkmair, 135 of which were completed by the Emperor's death.  The highly ambitious work would help demonstrate the extent of Maximilian's wealth and immortalize him as a powerful patron of the arts.  Each passing print continues the triumphant procession of Maximilian and his retinue.  One, titled “The Fifers of the Emperor,” features ten horse-mounted musicians with reed instruments raised.  Other prints feature their own ranks and files of complementarily dressed musicians, notably, combined ensembles of wind players with bowed- and plucked-string players.  These offer further proof of the variety of talent then within the Emperor's service.

Working within the court of Maximilian I at this time was the Franco-Flemish composer Heinrich Isaac.  Oddly, Isaac's position did not seem to require that he remain at court, nor did it hold him to duties such as training choirboys and conducting choirs.  Rather, during his employment, Isaac traveled frequently to cities such as Florence, Ferrara, Innsbruck, and Vienna.

In 1512, Niccolo Machiavelli, one of the most renowned political philosophers of the Renaissance, was expelled from his diplomatic office by members of the Medici.  A year later, he was charged with conspiring against Florentine heads of state and arrested.  Although subjected to severe torture during his imprisonment, Machiavelli denied all accusations.  When finally released, he substituted involvement with intellectual circles for his previous civic duties and returned to his writing with great fervor.

At the behest of his son, the German organist, lutenist, and composer Arnoldt Schlick compiled and published one of the earliest collections of works for organ and lute in 1512.  Schlick's “Tablatures of [Several] Canticles and Songs for Organ and Lute” includes ten compositions and intabulations for organ and fifteen for lute.  Also included is correspondence between Schlick and his son, from which we can gather details of the former's life, such as his travels within the Low Countries, his plans for future publications, and the opposition of his musical ideas to those of composer and theorist Sebastian Virdung.

1512 also marks the birth of James V, who reigned over Scotland from his infancy till his death.  According to Sir Thomas Wood, James was a highly skilled lutenist with a refined ear.  He would also have been an excellent singer, but for his “rawky” and “harske” voice.  A legend developed around James due to accounts of his wandering the Scottish countryside masquerading as a commoner.  This legend earned him the nickname the “King of the Commons.”