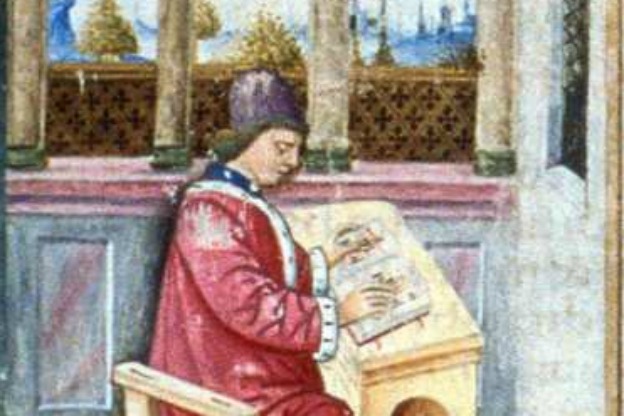 Sebastian Virdung, a priest from Amberg Germany, presented printer Michael Furter with a draft of his Musica getutscht or “treatise on music written in Germany.”  Musica getutscht was the first musical treatise to be written in a vernacular tongue.  Previous writings tended to be in either Latin or Greek.

Musica getutscht’s German text was likely geared toward members of both a rising middle class as well as the established nobility.  The treatise teaches readers how to play the clavichord, lute, and recorder; it also teaches how to decipher tablature, (a special kind of notation designed for instrumentalists).  Aiding the reader are illustrations of each instrument the treatise tackles.  The usefulness of these illustrations prompted them to be copied in later treatises, such as Martin Agricola’s Musica instrumentalis deudsch.

Sebastian Virdung intended Musica getutscht as a small part of his magnum opus “A German Musica.” This far larger treatise would tackle nearly every musical topic conceivable.  Sadly, “A German Musica” never made it to print, and the manuscript is now lost.

In 1511 in Arezzo, Tuscany, artist Giorgio Vasari was born.  The talented Tuscan youth enjoyed a rich upbringing greatly influenced by the burgeoning spirit of humanism.  While still in his teens, Giorgio travelled to Florence and befriended the great Michelangelo; soon after, he found himself in Rome studying the works of Raphael.  As a result of his excellent education, Giorgio Vasari came to be in high demand as both a painter and architect.  His works were commissioned in cities such as Naples, Florence, and Rome.  Among his patrons were members of the powerful Medici family.

Today, Giorgio is perhaps best remembered for his encyclopedic “Lives of the Most Eminent Painters, Sculptors, and Architects.”  This monumental work of artistic fact and fiction is a seminal account of artists active at the apex of the Italian Renaissance.

Composer, music theorist, and typical renaissance polymath Johannes Tinctoris died in 1511, leaving behind many volumes of writings on music.  These writings reflect Tinctoris’s authority on contemporary modal systems, music history, musical terms, and the art of counterpoint.  His strong opinions regarding certain aspects of musical performance put him at odds with other theorists such as Giovanni Spataro and Bartolomeo Ramis.  Tinctoris was also a highly skilled composer whose few surviving compositions point at his preference for contrapuntal intricacy and unusually low sonorities.