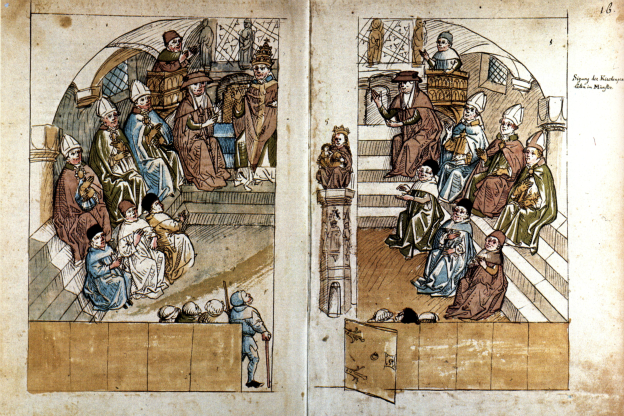 The city of Prague saw the installation of a massive astronomical clock on the southern wall of its Old Town City Hall in 1410. This special clock included three main components: an astronomical dial showing the positions of the sun and moon in the sky; a calendar dial showing the months; and an hourly show of moving figures known as “The Walk of the Apostles.” Designed by a professor of mathematics and a clockmaker in collaboration, the Prague Astronomical Clock is now the third-oldest clock of its type in the world, and the oldest still running.

That year, Prague also witnessed the excommunication of Czech priest Jan Hus by Antipope Alexander V. Hus was a chief supporter of ecclesiastical reformation prior to Martin Luther, John Calvin, and Huldrych Zwingli. He openly challenged the morals of clergy and papacy from his pulpit at the University of Prague. Hus was also a staunch defender of English philosopher John Wycliffe, whose writings were considered incendiary and heretical. However, in the winter of 1408, the university took measures to protect itself against heretical suspicion. All books by Wycliffe were seized and burned. Hus’s support of Wycliffe put him at the mercy of Alexander V and the Roman Catholic Church.

A few months later, Alexander V died suddenly in the company of the man who would succeed him as pope. Some speculated that Alexander had been murdered. The rumor that Cardinal Baldassare Cossa had poisoned his predecessor is now considered false; nonetheless, suspicion circulated during his consecration. In his papacy, the new Antipope John XXIII acted in the interests of the Medici family, who had supported him throughout his campaign to become cardinal and pope. The Medici Bank was decreed the official bank of the papacy; thus were the pockets of Florence’s most powerful family further lined.

John did not serve for very long. The Council of Constance was convened in *1414 to elect a new pope, and resistance led to his trial for heresy, simony, schism and immorality. In 1417, the ascent of John’s successor Martin V brought an end to the Western Schism.

Meanwhile, in Saint-Ghislain, a municipality of Belgium, Johannes Ockeghem is believed to have been born in 1410. Controversy regarding Ockeghem’s precise date and location of birth remains to this day. Some speculate that he knew and studied with composer Gilles Binchois in Hainaut while still a youth and because of this must have originated from that county. Others believe that the composer derived his name from his hometown of Okegem in East Flanders.  Like many musicians from this time, little is known about Ockeghem’s early life. Much of what we know today is drawn from an examination of his musical oeuvre. Between 1446 and 1448, Ockeghem served at the court of Charles I, Duke of Bourbon. Then, around 1452, he moved to Paris and served as maestro di cappella to the French court. Ockeghem’s surviving compositions include twenty-one chansons, five motets, a famous lament on the death of Binchois, and fourteen Mass settings.

Music heard on the time capsule:

*the audio version states the council convened in 1413.