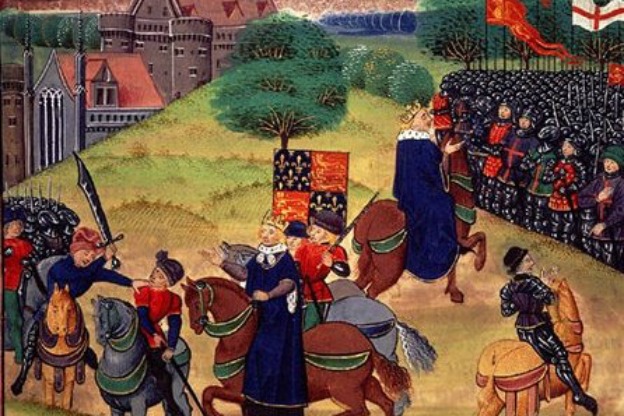 The Black Death, which struck both the Ruling and working classes indiscriminately, disrupted the fragile balance of social order in 14th century Europe. So many people had died from the disease that in order to keep up with the production of goods and services, the dwindling labor force was suddenly in much higher demand. But this didn’t stop rulers from limiting wages, and imposing taxes on their citizens; for the working class, these taxes were especially oppressive.

In England, the Peasants Revolt of 1381 was one manifestation of this teetering economic and social climate, and was a significant mile-marker in the beginning-of-the-end of feudalism. In June of 1381, led by a man named Wat Tyler, an army of the working poor and their sympathizers began marching toward London. Once in the city, mayhem broke loose. The insurgents sacked the famous palace of the Savoy; they burned buildings, opened prisons and rioted in the city, lynching and beheading wealthy merchants and leaders like Simon Sudbury (who was the Archbishop of Canterbury) and Lord Treasurer, Sir Robert Hales.

In the midst of the chaos, England’s 14-year-old King Richard II agreed to meet with Wat Tyler and the rebels. Although King Richard promised to meet all of their demands, during the negotiations Wat Tyler was stabbed by one of the King’s supporters. With their leader dead, the Peasant Revolt was quickly put down, and by the end of the month Richard II had revoked all the concessions he had promised. Nonetheless, the revolt demonstrated that seeds of social change were already beginning to spread, and that the decline of serfdom in Western Europe was on the horizon.

About a decade after the 1381 Peasants Revolt, Geoffrey Chaucer referenced the event in his poem “The Nun’s Priest’s Tale,” and about six centuries later, the 20th century British composer Alan Bush wrote an opera called Wat Tyler, which was a musical account of the revolt told from the perspective of its famous leader.

But back to the 14th century…the year of the Peasant’s Revolt was also a year of accomplishment. In 1381, Jean Charlier de Gerson received the equivalent of a Bachelor’s degree, (a licence ès letters), from the Collège de Navarre of the University of Paris. He later earned a master of Theology as well. Gerson’s many surviving writings include religious and doctrinal works, poetry, as well as the text for a mass and Office in honor of St. Joseph.  Gerson’s interest in music can be seen in his Tres tractatus de canticis. Besides being an exposition on music theory, the work also references many musical instruments and includes a poem called Carmen de laude musice, or, A Poem in Praise of Music.

1381 was also the year that another scholar, Pietro Filargo da Candia, received his doctorate in theology. Filargo eventually became the Archbishop of Milan and worked there at the same time as the Italian composer, Matteo da Perugia. Matteo composed masses and at least two isorhythmic motets, as well as secular songs in both Italian and French. His music is often characterized by the uses of imitation between voice parts, syncopated rhythms and unusual melodic leaps embellished by lots of Italianate ornamental figures.

Music heard in this time capsule