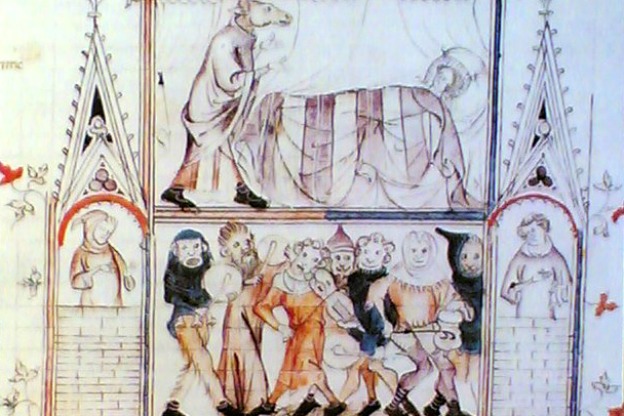 Edward, Prince of Wales, was granted a papal dispensation to wed Joan “the fair maid of Kent” in 1361. It is believed that, one year prior, the long-affectionate couple had secretly exchanged marriage vows. The difficulty of Edward and Joan's union was caused partially by Joan's previous marriages and partially by her and Edward's kinship – (they were cousins). Nevertheless, despite all controversy, Edward maintained his reputation as a formidable military leader. His victories (at Poitiers and Crécy) earned him popularity among the English, and, from the French, the nickname the “Black Prince.” Joan earned the reputation of "the most beautiful woman in all the realm of England, and the most loving" in a description by the famous chronicler Jean Froissart.

Johannes Tauler, a German mystic theologian, died in the city of Strasbourg in 1361. Tauler is remembered for his preaching of Christian universalism, a belief that all souls share the same birth and ultimately return to a single divine source. Tauler is also remembered for his loyal service to the city of Basel. In 1348, the Black Death swept through the city. Tauler, however, remained at his post, providing comfort and religious guidance to citizens who had not fled.

In 1361, the University of Pavia (Italy) was established. A record written by the 9th-century Frankish ruler Lothair I reveals that an educational institution had, in fact, existed in Pavia as early as 825 AD, centuries before the university's official founding. This makes the site one of Europe's longest standing centers of learning.

Also in that year was the death of Philippe de Vitry, one of the foremost composers of the Ars nova and a man called "the great philosopher and truth-seeker of our age” by none other than Petrarch.

The term “ars nova” appears in two musical treatises from the 14th century: the Ars novae musicae of Johannes de Muris and what is believed to be the Ars nova notandi of Philippe de Vitry. Described in these treatises are novel compositional techniques concerning rhythm and meter. Motets cast in the Ars nova's cutting edge mould appear within Philippe de Vitry's setting of the Roman de Fauvel, a biting and satirical commentary on the contemptible practices of church and state authorities.