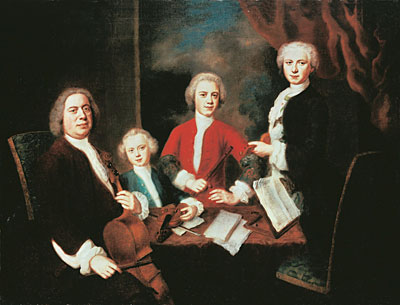 What if your name was famous, but your work wasn’t? For those composers who share names with their more glorified relations, it’s all too easy to fade into the shadows…until now! This hour on Harmonia, we’re devoting a full hour to the also-rans: the Bachs who aren’t Johann Sebastian, the Purcells who aren’t Henry. We’ll sample music by the other guy – or girl – this hour plus a featured release of music from the Spanish Renaissance.

You know you missed out on stardom when your encyclopedia entry begins, “although not as famous as….” Although not as famous as Tomás Luis de Victoria, his Spanish Renaissance contemporary, Alonso Lobo, was well-regarded in his own time, and copies of his music made their way as far afield as Mexico City. We heard “Versa est in Luctum,” a seven-voice sacred motet by Alonso Lobo, sung by The Sixteen.

Henry Purcell is one of the best-known names of the English baroque. But what about his relative, Daniel? Either a brother or cousin of the more famous Henry, Daniel was an organist and a talented composer in his own right. Like his relative, he received early musical training as a chorister, and, also like his relative, he was active in the theater, contributing music to over forty plays. The mad song “Morpheus, thou gentle God,” is from one of these, Achilles, or Iphigenia in Aulis, performed in London in 1699.

Music by a not-quite-so-famous Purcell, a violin sonata by Daniel, not Henry. And before that, more music by Daniel Purcell, “Morpheus, though gentle God,” recorded by Sprezzatura, featuring soprano Evelyn Tubb.

Orlando Gibbons was a Renaissance giant. Like his father, Orlando’s eldest surviving son, Christopher, was also a keyboard player and composer, but, unlike his father, Christopher’s main focus was on performing and teaching. He also had a documented interest in the art of “living it up.” Historian Anthony Wood described Christopher as “a person most excellent in his faculty, but a grand debauchee.”

Even with all that teaching and debauching, the younger Gibbons found time to compose. We’ll hear his motet “O bone Jesu,” performed by the Choir of the Academy of Ancient Music.

Music by Christopher Gibbons, son of the more famous Orlando. A motet, “O bone Jesu,” performed by the Choir of the Academy of Ancient Music.

The Rain in Spain

Born in Seville around 1520, Pedro Guerrero is best known as the older brother and first music teacher of Francisco, the Guerrero who would ultimately go on to far outstrip Pedro in the history books. Today Francisco’s music is widely known, while Pedro’s is performed far less frequently.

We’ll let the elder brother have his due this hour, as we hear two pieces by Pedro Guerrero. First, an instrumental version of “Quinque Prudentes Virgines,” performed by Ensemble La Danserye. After that, we’ll hear “¡Oh, Más Dura Que Marmól a Mis Quejas!,” recorded by La Grande Chapelle.

Sometimes you’re just as talented a composer as your sibling, but you happen to have been born female during a time when women weren’t supposed to compose. Such was arguably the lot of Fanny Mendelssohn, sister of Felix. Felix encouraged his sister’s musical activities but, perhaps out of jealousy, discouraged her from publishing her work. And her brother’s word carried a great deal of weight with Fanny: in 1836, she wrote to him that she would “cease being a musician tomorrow if you thought I wasn’t good at that any longer.”

But she was good at it, and her music endures. We’ll listen to the finale from her 1846 Piano Trio in d minor, performed by The Atlantis Trio.

Music performed by The Atlantis Trio, the finale from Fanny Mendelssohn’s Piano Trio in d minor.

"Bach" in the Game

Perhaps no family is more famously full of musical also-rans than the family of Johann Sebastian Bach. Records suggest that, in the Thuringian duchy of Germany, over 53 Bachs held positions as cantors, organists, or town musicians over a 300 year span. Their present-day reputations may languish in the shadow of their most famous relative, but the 52 Bachs who were not named Johann Sebastian definitely had something to offer musical posterity.

In the generation preceding J. S., the Bach family boasted able composers in brothers Johann Michael Bach and Johann Christoph Bach. Sons of a musical father, the brothers were well-regarded as composers, both within and outside of the family. Johann Christoph was dubbed the “profound” one in J. S. Bach’s own genealogy of his family. Johann Michael was merely “skillful,” though he also played another important role in Johann Sebastian’s life – that of father-in-law! In his dictionary of musicians, E. L. Gerber wrote of Johann Michael’s preludes that “none is entirely unworthy of the name Bach.”

It’s been an hour for the also-rans, but we’ll close with one of history’s winners. The reputation of the Spanish Renaissance composer Franscisco Guerrero quickly overtook that of his elder brother and first teacher, Pedro. Francisco’s life was colorful: he traveled frequently, fell victim to pirates, and spent time in a debtor’s prison. He also managed to publish music in Seville, Venice, Paris, Leuven and Rome.

The British choral ensemble The Sixteen released Flight of Angels in 2015. The recording features the music of Francisco Guerrero alongside the music of his successor, Alonso Lobo.

Let’s listen to a work by Francisco Guerrero, a setting of the text “Agnus Dei,” recorded by The Sixteen under Harry Christophers.

Music by Francisco Guerrero from a 2015 release on the CORO label, Flight of Angels. We heard The Sixteen, under the direction of Harry Christophers.