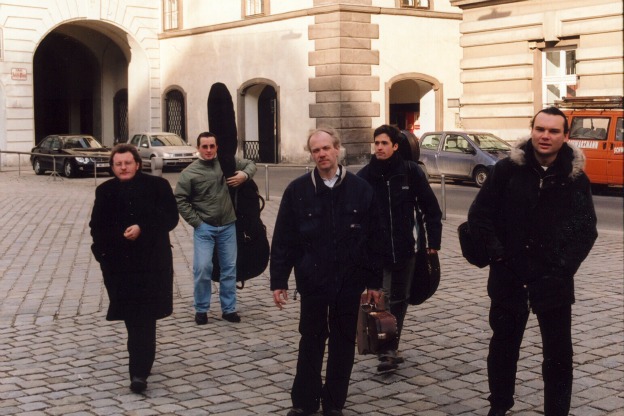 Gregor Werner was a composer of the late Baroque.  Born eight years after Bach, he spent most of his professional life as Kapellmeister in the Esterházy court, taking up that position in 1728.  The appointment put Werner in charge of all the music at the court, that is, until Joseph Haydn came along.  In 1761, the Esterházy family, obviously wanting some new blood, hired 29-year old Joseph Haydn to take on the primary duties of the orchestra and all secular musical events. They limited Werner's musical duties to just the church music, imposing a kind of semi-retirement on him. Perhaps the trendy young Haydn was meant to help the Esterházy family stay musically on the cutting edge.

Werner was on the tail end of the late baroque, but was set staunchly in his compositional ways, and his music adhered to strict contrapuntal textures. But by the mid 18th century, a new musical language was emerging: the classical style. Haydn had embraced the new classical language, Werner had not. In fact, Werner was adamantly opposed to the new style, at least in the hands of Haydn. Werner engaged in some pretty rancorous name-calling referring to Hadyn diminutively as a Gsanglmacher, or a little common song-maker, and as a Modehansl, that is, a fashion-lackey of sorts, a slave to the musical trends of the day.

In 1765 Werner got so fed up with Haydn that he filed a complaint in a letter to Prince Esterházy. Werner accused Haydn of being slack, negligent and lazy in his management of the performers, the court instrument collection and music archives. Werner also faulted Haydn with being overindulgent with expenditures and letting the Esterhazy’s once fine musical establishment, which he himself had worked so hard to build and maintain, go to pieces. The Prince issued an official document reprimanding Haydn. And actually, for us it’s a good thing. Maybe as a way to disprove the accusations of laziness, Haydn started keeping a thematic catalogue that documented of all of his own compositions. And it’s because of this catalogue that we know so much about the content of and chronology of Haydn’s output, especially his early manuscript works leading up to the late 1770s.

But, whatever their personal difficulties may have been, it seems like Haydn respected Werner and his compositions. As late as 1804, Haydn was still thinking about Werner. Haydn took six fugues from Werner’s oratorios, arranged them for string quartet, and had them published. The title page of the publication indicated that Haydn edited the pieces, “out of particular esteem towards the famous master,” that is, Werner. Those pieces are all included on this recording. Additionally, though Werner never subscribed to a more modern 18th-century classical style, we do get a taste of another side of him. Every now and then, there’s a folksy element to his writing as in this pastoral for two violins.

Werner certainly deserves some attention and deserves to be pulled out of Papa Haydn’s shadow, so thanks to Ars Antiqua Austria! It’s exciting, and just goes to show how much there is out there yet to discover.