Paying Tribute To The Golden Voice Of Johannes Ockeghem 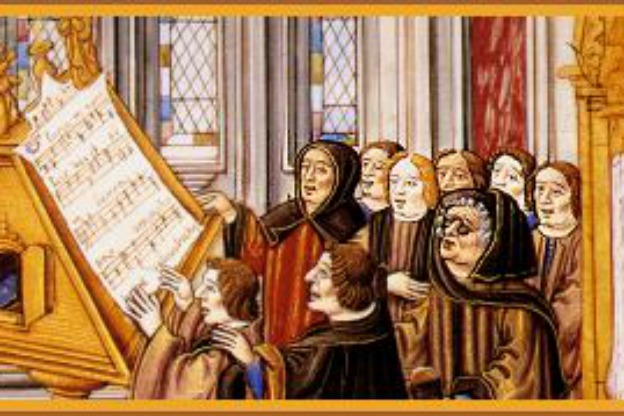 The ensemble Diabolus in Musica, directed by Antoine Guerber brings us a newÂ 2012 Aeon recording entitled Plorer, gemir, crier... The disc describes itself as "A Requiem for the â€˜golden voice' of Johannes Ockeghem," the Franco Flemish composer and singer who died in 1497.

On the death of Johannes Ockeghem

Ockeghem had spent the last 46 years of his very long life in the royal city of Tours, and at his death in 1497 the Dutch Renaissance humanist Desiderius Erasmus wrote, "So has it now fallen silent, that voice once so noble, the golden voice of Ockeghem? Is the glory of music thus extinguished? Mourn, as many of you as have been seized by the sweet study of music, and speak of that man with praises. The sacred phoenix of the art of Apollo is fallen."

Musicians, be sure to lament.

â€¦Singers, weep for that illustrious lord

as you study his sweet angelic songs...

And, indeed a number of famous composers took up the challenge. One of the best known pieces presented on the CD is Josquin des Prez' Nymphes des bois, a piece that pays tribute to Ockeghem's own dÃ©ploration on the death of the composer Gilles Binchois. Nymphe des bois is a chanson-motet that sets of a text by Jean Molinet in 4 voices in combination with a fifth part: "Requiem eternamâ€¦" taken from the Requiem Mass. Its words mean "Grant them eternal rest, O Lord, and let perpetual light shine upon them."

At the end of the piece, the Molinet poem reads:

And weep great tears from your eyes:

You have lost your good father.

May he rest in peace, Amen.

Thus a poetic lament naming famous composers of the day seamlessly moves into the liturgical sphere ending with the word pacem â€“ "peace" â€“ soaring up to heaven before the somber "Amen."

Praises for the master Ockeghem

The disc also includes a number of pieces probably composed before Ockeghem's death, including Jacob Obrecht's Missa â€˜Sicut spina rosam', which clearly shows the influence of his teacher Ockeghem's Missa "Mi-Mi" (as in the solmization syllable after "re," and nothing whatever to do with Maurice Chevalier!), and Antoine Busnois' In hydraulis. A hydraulis is an organ powered by water, for your information â€“ something to ponder, eh?

Busnois' piece is a technical tour de force for both the composer and those who attempt to sing it. Its erudite text praises the master Ockeghem and his fulfillment of the musical discoveries made by Pythagoras â€“ who supposedly heard the above-mentioned water organ. The composition ends with the words:

May you be greeted for your merits,

As the supreme master of melody.