The Golden Age Of The Cornett 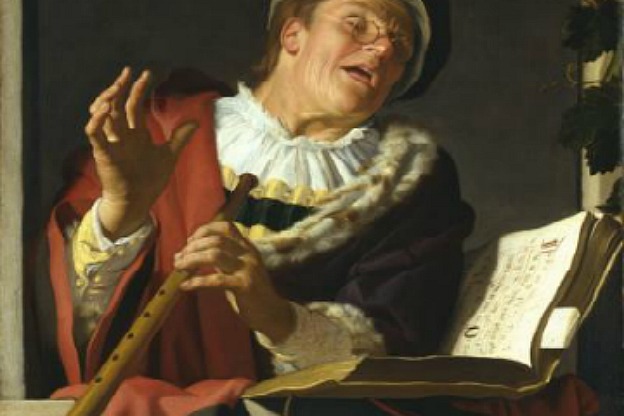 The Golden Age of the Cornett is the title ofÂ Le Concert BrisÃ©'sÂ recording dedicated to the repertoire of thisÂ instrument-the cornett-which is alternately called the cornetto and in some countries, the zink. Though recorded separately in 2003 and 2005, the 2-disc set can be heard together in a program released by the Accent label in 2013.

Not to be confused with the modern valved brass instrument similar to the trumpet, the most common sixteenth-century cornett was a bit longer than an alto recorder.Â Cornetts are made from a hollowed-out piece of wood and are very often curved to the right and covered over with leather. There are six finger-holes and a thumb-hole drilled in the body of the instrument, and it's played with a small cup-shaped mouthpiece.

So when exactly was the golden age of the cornett?Â The music included on this recording extends from the last decades of the 16th century, to music published in the 1660's. Looking to contemporary source accounts from this period regarding the cornett, two things become immediately apparent: the cornett was admired for its beauty of tone, and the cornett was highly regarded for its virtuosity. Le Concert BrisÃ© gives us examples of both on this recording.

The cornett's beauty of tone was often compared with the expressive powers of the human voice. In his division manual Il vero modo di diminuir the late-sixteenth-century musician Girolamo dalla Casa noted that:

"Of all the wind instruments, the most excellent is the cornett for it imitates the human voice more than the others. This instrument is played piano and forte and in every sort of tonality, just like the voice."

And in his 1636 book Harmonie universelle, French mathematician, philosopher, and music theorist Marin Mersenne described the cornett like:

"the brilliance of a shaft of sunlight appearing in the shadow or in darkness, when one hears it among the voices in cathedrals or in chapelsâ€¦"

Besides tone, Mersenne and dalla Casa also described the cornett in terms of its virtuosic display. Extravagant divisions (also called diminutions), where players added notes or varied an existing melody were common at this time in music history. In his writings, Mersenne suggested that the cornett should almost always be played in diminution, and Dalla Casa provided numerous examples of the practice in his publication.

Decline of the cornett

By the end of the 17th-century, the popularity of the cornett had largely died out in favor of violins and oboes and trumpets, though, it is worth noting that as late as the 18th century, Bach still composed for the cornett in some of his cantatas and at least one motet.

Why Did the Cornetto Die Out? Â Click here for an article by Bruce Dickey.