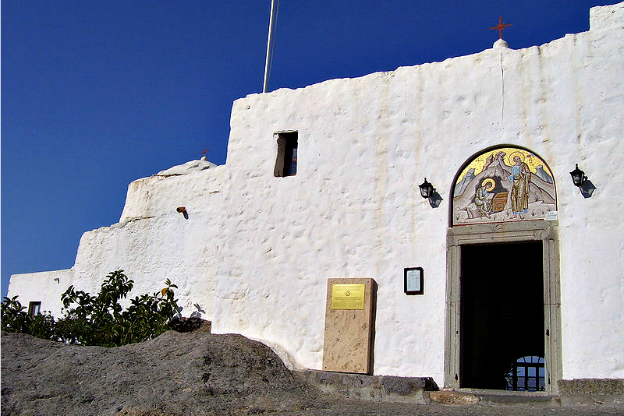 Today's podcast features music related to the Byzantine chant tradition as well as Georgian polyphony. Cappella Romana perform on their 2012 recording, Live in Greece: from Constantinople to California, and the Basiani Ensemble presents their 2012 Ocora release, Georgia: Sacred and Secular Polyphony.

Byzantium started as an ancient Greek colony that linked the Black Sea to the Mediterranean.  In 330 A.D., the Christian Roman Emperor Constantine I, chose Byzantium as the site of a new Roman capital and (naturally!) named it after himself, Constantinople. But the Roman empire was huge, and eventually, the western and eastern regions divided. By 1054, theological and political differences between Rome and Constantinople led to the schism between Western and Eastern Christianity. Over time, the Byzantine Empire disappeared almost completely, and in 1453, the Ottomans captured Constantinople. That area is now known as Istanbul in Turkey.

What does Georgia have to do with Byzantium, you might wonder? Some of what was once Georgia is also now Turkey.

On the eastern border of the Byzantine Empire, already established in the 4th century BC and remaining a sovereign state even today, is Georgia – nothing whatever to do with peaches!  Its name might come from St. George, one of their favorite saints, or it might have classical roots in words having to do with agriculture, but either way, there is still a Georgia, but of course there is no more Byzantium.

After the fall of Constantinople and its transition to Ottoman rule, many Byzantines moved to the island of Crete which at the time was under Venetian rule. This area became an interesting mix of cultures and musical styles.

Cappella Romana sings a two voiced prologue by Manuel Gazes, a Byzantine composer associated with Crete around this time in history.  The piece is notated in a 15th c. service anthology, and is sung in Greek. Also on the CD is a 5-part motet from 16th century Crete.  Sung in Latin, it’s a setting of Psalm 119, “In my trouble I cried to the Lord and he heard me," by a composer named Leontaritis.  Born in Renaissance Crete to a Greek mother and Italian Father, Leontaritis fully immersed himself in the Western Latin Church tradition and musical style, even becoming an ordained Roman Catholic priest while on the island. He eventually went to Venice to study with Adrian Willaert and later worked under Orlande de Lassus.

The Georgian music on the Basiani Ensemble's recording however remains resolutely non-European in sound, and more than one tradition is represented, even in the sacred music.  The opening of two settings of the same text, a church hymn dedicated to the Virgin Mary, from two different regions of Georgia are reminiscent of very early Western polyphony, even though it is not modal in the same way and the vocal style is quite different from what we might expect.

Some of the secular music on this disc sounds like rompin’ stompin’ Russian dance music, and some of it sounds as if some eastern singers have gone into the mountains (not unreasonable in that part of the world!) and done the same thing they’ve done in Switzerland for ages – yodelled!  In one traditional banqueting song, seven men try to outdo each other with spontaneous improvisations.

The oral transmission of this music is very important to these young singers of the Basiani Ensemble. They grew up hearing their music and learning to sing it from their elders and they studied old recordings, working very hard at passing along their musical heritage in as untarnished a form as they can.

Going back to the subject of Byzantine chant, it has evolved over the centuries in an interesting way. Especially in America in the early 20th century, much of the music got simplified and reworked. But after WWII, many contemporary composers began to revive some of that older Byzantine tradition.  A piece Cappella Romana performs by contemporary composer Michael Adamis, has both of those influences.

When comparing the recordings from the Basiani ensemble and Cappella Romana, we see that both are keeping tradition alive, each in their own ways. The Georgians and the Californians-they started out as neighbors and end up as neighbors, though in a very different way!