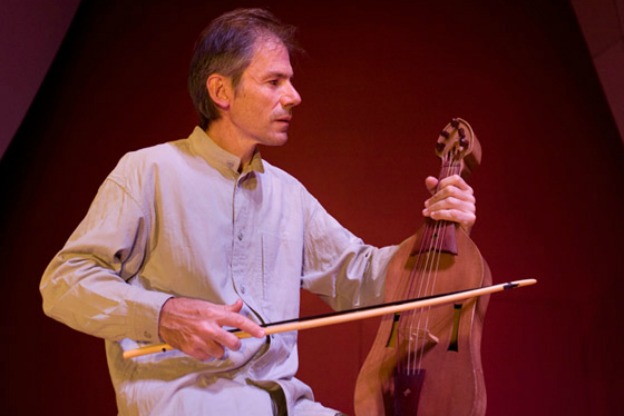 Today we're exploring a 2012 release by ECM New Series called Saltarello. Viola, viola d’amore and medieval fiddle player Garth Knox is joined by cellist Agnès Vesterman and percussionist Sylvain Lemêtre on a CD that embraces music of nearly a thousand years, from Hildegarde of Bingen to music of Knox himself.

What is Early Music?

Is early music categorized as something that comes from before a certain date? If so, what is that date? And, where does traditional music, folk music, and other music whose composition date is unclear fit into the picture? Or is early music that which is played on certain instruments-perhaps we can just say “those that are called early instruments” by their makers? Or are we talking about a style of playing that the player or the listener identifies as “early music” or “historical performance"?

Well, thank you very much Garth Knox for opening this huge can of worms! In the end, we can just enjoy the music and let the Scotsman Garth Knox tell us what he is doing, which he very kindly does in the accompanying booklet to his new recording.

Celtic folk music is one of the hidden threads that run through the CD. The chronological order of the pieces on the recording does not determine their sequence, but rather what Knox hears as their relation to each other, as well as exploring the outer reaches of historical performance ideas.

For example, Knox points out the tendency of baroque performance toward lightness and clarity, so he takes a Vivaldi concerto for viola d’amore, scored originally for that instrument accompanied by a small string orchestra plus continuo, (which could be, for instance harpsichord or perhaps a plucked instrument like a chitarrone or a harp), and performs it with just two players – the viola d’amore soloist and a cellist playing the bass line. In the slow middle movement, the cellist does not use her bow, but plucks the bass line, realizing the chords implied by it in a undeniably historically informed fashion.

Knox also does pairings of pieces.  In one track, Hildegard’s Ave generosa, obviously a devotional piece, is joined to a piece from several centuries later, Tels rit au main by Guillaume de Machaut. Both pieces are played on the medieval fiddle, the first a bit of religious ecstasy, making the transition, emphasized by the entry of percussion, into the courtly and secular realm of the poet and composer Machaut, who tells us that he who laughs in the morning will cry in the evening.

Even without reading the liner note, the early music afficionado will hear the flow from Purcell to Vivaldi and the sound of familiar pieces in unusual arrangements: and the casual listener will hear three musicians create a great deal of variety in variety in color.