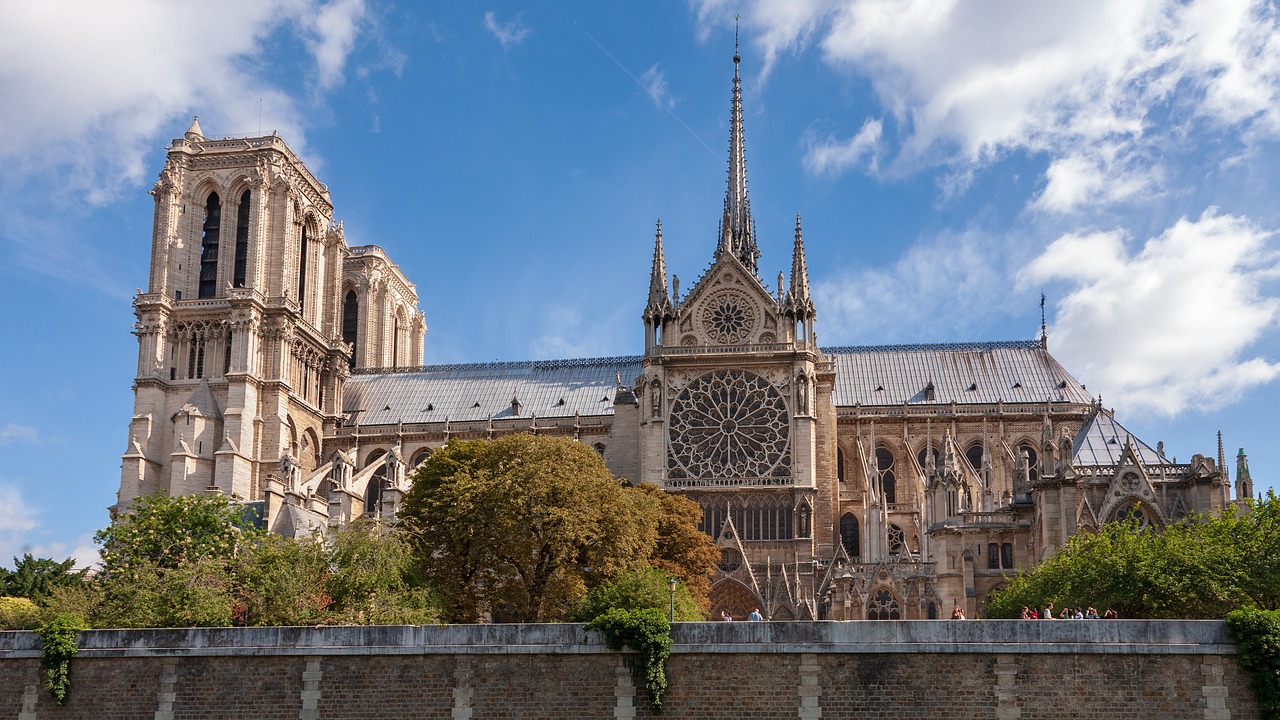 The Cathedral of Notre Dame was heavily damaged in April 2019 by a disastrous fire, and although its largest historical organ managed to survive, there was much devastation. Strangely, we already had a Harmonia program in the pipeline exploring the musical legacy of this great Cathedral. As a result, this hour’s Harmonia program has in some ways turned out to be a meditation on impermanence, as we listen to music connected to Notre Dame and Paris — and also, later in the program, as we pay tribute to Michael Jaffee, co-founder and longtime director of the Waverly Consort, who passed away on June 15, 2019 at the age of 81.

An anonymous conductus in the medieval Notre Dame style, performed by the Hilliard Ensemble, from their classic 1988 ECM CD Perotin.

The world watched in horror on April 15, 2019, as the great cathedral of Notre Dame burned, its spire dramatically melting in flames and crashing to the ground. For musicians, it was particularly poignant. In the medieval period, Notre Dame Cathedral was home to a whole school of cutting-edge musical activity. This encompassed a number of musical developments, from the distinct style known as “Notre Dame Polyphony” and its iconic composers Léonin and Pérotin, to innovations in the notation of melody and rhythm. It’s not an exaggeration to say that a lot of Western polyphonic music is rooted in the rich organum tradition that developed in and around Paris in the 13th century. This music resonated throughout Notre Dame Cathedral, as the city of Paris grew and changed around it.

This is the Sanctus from the Mass for the Nativity of the Virgin — music from the 13th century Notre Dame Cathedral.

We heard the Sanctus and Communion from the Mass for the Nativity of the Virgin, attributed to Léonin (or possibly Pérotin).

During the Renaissance, many composers at the Cathedral of Notre Dame looked back to this so-called “ars antiqua” style of polyphony for inspiration. Henri Frémart was one such composer, even though he composed in the 17th century in a decidedly Renaissance style. We’ll hear the Kyrie, Sanctus, and Agnus Dei from Frémart’s 1642 Missa ad placitum.

While Frémart and his contemporaries wrote music in a conservative, ars antiqua-inspired style, a few composers challenged this practice. It’s no surprise that a composer like André Campra, known as an opera and ballet composer, wasn’t content to use exclusively a capella singing for sacred music at the cathedral, and added violins to support the choir. Here is music from Campra’s first book of Motets, “Tota Pulchra es” performed by Ensemble Aquilon.

We heard André Campra’s “Tota Pulchra es,” from his first book of Motets published in 1695, performed by Ensemble Aquilon.

Welcome back! We’re listening to the sounds of music associated with Notre Dame Cathedral. As we heard with Campra’s violins, the vibrant musical activity at this famous cathedral was continually impacted by changing musical tastes as they developed in Paris. Moving back in time a bit, Pierre Certon worked as clerk for matins at Notre Dame in 1529. He generally fulfilled his musical duties, but was fined for playing hooky from a service and for playing ball in the square outside the cathedral. Luckily, his youthful indignation didn’t cost him his career — or time at prison! As part of his jobs at Notre Dame and later the Sainte-Chapelle, Certon wrote sacred music, as you might expect — but we most remember him for his colorful chansons. Here are “J’ay le rebours” and “Par un matin, la belle s’est levee.”

This week on Harmonia we’ve been listening to music associated with the Cathedral of Notre Dame. Interestingly, the original version of this program was written before the terrible fire that occurred at Notre Dame in April 2019. As the world watched the awful sight of the spire crashing to the ground, I was reminded of the many spiritual teachings that emphasize the impermanence of all things — even things that seem as enduring as an 850-year-old cathedral.

It seems fitting, therefore, to dedicate the last segment of our program this week to the memory of an early music pioneer — Michael Jaffee, who co-founded the Waverly Consort in 1964 with his wife Kay. He passed away on June 15, 2019, at the age of 81.

When Michael Jaffee and Kay Cross met at New York University in 1959, they may not have been able to foresee that together they would found one of the most well-known early music ensembles in the United States — and I would say even the world — The Waverly Consort. The group’s repertoire has covered a vast variety of early music, from medieval European music to 18th and 19th-century American. Over the years, they have been joined by an illustrious list of wonderful early music performers, both vocalists and instrumentalists.

"Lamento di Tristano," played by The Waverly Consort, directed by Michael Jaffee, from the CD Douce Dame: Music of Courtly Love from Medieval France and Italy, recorded in 1973 and re-released in 2008 by Vanguard Classics.

One of the most famous of the Waverly Consort’s early programs was a semi-staged production featuring the Cantigas de Santa Maria, which they toured internationally. The resulting CD was their landmark 1972 recording of a number of the Cantigas, which included not only music, but also recitation of the texts artfully placed before the pieces, and over musical interludes and introductions. This is Cantiga #117, "Toda Cousa."

From the 1972 recording Cantigas de Santa Maria: medieval verse and music in the court of Alfonso X El Sabio, that was the Waverly Consort, directed by Michael Jaffee.

The Waverly Consort was known for their beautiful live performances, with extensive program booklets and notes, and a theatrical flair. Their Christmas programs and CDs were incredibly popular, as were their annual Christmas concerts in New York City.

Many of the Waverly Consort’s best-known recordings featured music from medieval or Renaissance Spain. The words to this one say, “I have seen the map of the world,” and then it goes on to mention many places that might have been seen by a 15th century traveler, who ends the poem by declaring that of all of them, Sicily is the most beautiful.

“I have seen the map of the world,” 15th century Spanish music performed by the Waverly Consort, directed by Michael Jaffee.

“What we try to do is bring people into a world that they might not know...we use the music as a springboard to the spiritual experience. That’s our goal. We want to involve the audience and let them imagine that they are in another time and place.”

Michael Jaffee passed away June 15th at the age of 81, having achieved that goal many times over.

The writers for this edition of Harmonia were Sarah Huebsch Schilling and Angela Mariani.