Field Of Cloth Of Gold 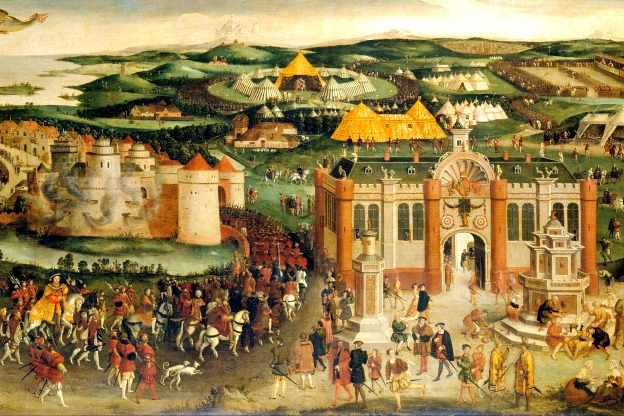 Fountains of wine, acres of cloth woven with gold, over a thousand crumpets: in 1520 in a field outside Calais, King Henry the eighth, king of England, and the French king Francis met for seventeen days of celebration and pomp. The men were supposed to be cementing peace, but instead they were competing for power. On this edition of Harmonia, we’ll explore the musical side of this competition with music by English and French composers present at the historic meeting of monarchs at the Field of Cloth of Gold. We’ll also hear music from a featured release by the Boston Camerata.

During Henry’s time, the number of musicians employed at court swelled to 58, including musicians who hailed from exotic destinations like Italy and the Low Countries. As both a composer and an employer, Henry appreciated good music-making, paying his musicians well and making lavish presents to them during the holiday for musical favors: a hefty purse in appreciation for “a pricksong book,” for example.

It was the summer of 1520. King Henry the Eighth was young and brash and in his prime and looking to solve of the perennial problem of France. He’d tried military campaigns, political machination, and an advantageous betrothal between Henry’s daughter Mary and the infant French dauphin.

But friendship was Henry’s weapon of choice in 1520, and under the guidance of Cardinal Wolsey, he met Francis One, the French ruler, in a field near Calais for seventeen days of feasting, feting, and chest-thumping. The assembled parties reportedly went through 2200 sheep, 1350 crumpets, and 70 jars of strawberry jam. There were fountains of wine, a temporary castle complete with chapel and organ, monkeys covered with gold leaf, and yards and yards of cloth shot through with gold.

There was also music. Both Henry and Francis had brought their best and brightest musicians with them in an attempt to outdo one another with sound. The wise old hand Jean Mouton led the French musical efforts.

Francis may have thought he had a surefire winner with Mouton, but King Henry ensured stiff musical competition by bringing along William Cornysh, a composer, choirmaster, actor, poet, dramatist, and experienced producer of spectacle!

Cornysh was responsible for staging pageants at the Field of Cloth of Gold. He was also supposed to be minding and feeding at least 10 choristers. He was, by all accounts, a multiply talented man, though he occasionally had to be reprimanded for neglecting his young charges. And as every good actor should, he did a stint in prison; it’s not certain for what crime, though the prime suspect is writing satirical verse.

Let’s hear some secular and sacred music by William Cornysh.

Englishman Robert Fayrfax would have been a venerable 56 years old when he accompanied his monarch to the festivities as a Gentleman of the Chapel Royal. Fayrfax was, by all accounts, a valued member of the King’s household. He had become both a knight and a doctor: in 1514, Henry dubbed Fayrfax a “Poor Knight of Windsor;” and in 1504, he received a doctorate of music from Cambridge after meeting the requirements: composing a mass and an antiphon to be performed at his graduation ceremony!

It may be a far cry from today’s lengthy theses and oral defenses, but Fayrfax’s doctorate seems well-earned. His music is complex and accomplished, and when Fayrfax died only a year after visiting France in 1521, his loss was mourned by his king.

Unlike Fayrfax, who attended the festivities at the end of his life, Claudin de Sermisy arrived at the Field of Cloth of Gold in his prime. The French composer would have been around thirty when he assisted Jean Mouton in mounting many of 1520’s musical activities. He would certainly have participated as a singer in masses put on by the French and English royal chapels, and he may have been absorbing lessons in spectacle: When the two monarchs met again, twelve years later at Boulogne, de Sermisy was ready with his own ceremonial motet, De Pacem Domine.We’ll hear a different motet by de Sermisy, Noe, noe, magnificatus est rex pacificus.

Tyrant…diplomat…husband…composer? King Henry probably didn’t have much time for crafting music on the Field of Cloth of Gold, but he made time back at home in England. Henry enjoyed playing the lute, organ, and virginals as well as singing, dancing, and composing. He left behind vocal and instrumental works in both English and French—a sign of the intimacy, if not the peacefulness—of the relationship between the two nations.

Let’s hear a few pieces by Henry, the composer-king.

“How much music from the “New World” is truly new?,” asks The Boston Camerata on our featured recording.

On the 2013 Cybercentaur release New Britain, The Boston Camerata explores an unconventional blend of art song and folksong. We’ll hear Calenda Maia, a 12th-century Provençal song about love’s longing at the start of May, along with Cuando Por El Oriente, a song transcribed in New Mexico in 1953. Also in the mix are Thomas Ravenscroft’s famous round “There Were Three Ravens,” its mid-20th-century Texan counterpart “There Were Three Crows.”

Music at the crossroads of old and new: we heard The Boston Camerata perform on the 2013 recording New Britain.

The writers for this edition of Harmonia are Anne Timberlake and Laura Osterlund.

Curious about what’s new in recordings of early music? We review recordings new and old each week on the Harmonia Early Music Podcast. You can subscribe on iTunes or at harmonia early music dot org.