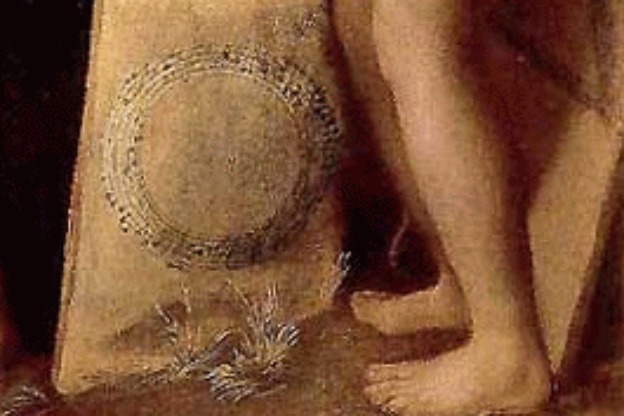 The Chantilly Codex is the most well-preserved manuscript of late fourteenth-century French vocal music, and many of the composers whose works are found within are thought to be related to each other in different ways. Geographic proximity, court employment, and university connections factor into these relationships, but the master-and-pupil bond is what may be referred to in this piece.

Senleches possibly composed "Tel me voit" as a tribute to his presumed teacher, a fellow composer of two works represented in the Chantilly Codex who goes only by the name "Guido" in the manuscript.

We'll hear more from the Ferrara Ensemble later in the program on our featured release titled Figures of Harmony: Songs of Codex Chantilly.

A painting titled Allegory of Music by sixteenth-century Italian artist Dosso Dossi contains two strange looking pieces of sheet music. One is an anonymous work notated in the shape of a circle while the other is notated in the shape of a triangle. The triangular work is attributed to none other than the Franco-Flemish composer Josquin des Prez as a visual representation of the Holy Trinity.

The circle seems to have been a popular shape for what we call "eye music," since English composer John Bull appropriately notated his canon titled "Sphera mundi" in the round.

The purpose of depicting the music in the form of a shape or a picture served obvious means of representation to the performer viewing it, but the audience listening to it heard only the music being made. Unless they got to see the manuscript afterward, the visual allusion (or, sometimes, the joke) was lost on them.

Baude Cordier was a renowned composer of intricate music from the late fourteenth and early fifteenth centuries. Cordier may have been the first to take up the circular depiction of music for his canonic rondeau titled "Tout par compas suy composes," which means "with a compass was I composed." You can understand how this would make absolutely no sense to listeners who couldn't see the music itself!

Even more astounding than the visual appeal and the apparent skill of Cordier's music could be that it's likely that Cordier himself inscribed and geometrically designed "Tout par compass" and another work titled "Belle, bonne, sage" for addition into the Chantilly Codex.

The pages for these two works were added in at a later time and were included prominently at the head of the codex. One would certainly be impressed upon opening the book and first seeing a circular canon alongside another canonic work in the shape of a heart.

"Belle, bonne, sage" is, like "Tout par compas," also a rondeau played as a canon. Its text on themes of love is served aptly by its heart-shaped layout, its usage of pitches notated in red ink, and by a small cluster of red-colored notes that is also arranged in the shape of a heart.

The popularity of eye music ensured that it showed up in the unlikeliest of places, unbeknownst to an audience but all too real and humorous for the performer. Perhaps the challenge posed by the composer was for the performer to maintain a good poker face upon discovery of the music's schtickâ€¦

Perhaps nowhere could these ridiculous score jokes be more apparent than in the manuscript to a suite for two violins by German Baroque composer Georg Philipp Telemann.

The joke here is threefold: the notes themselves suggest the sizes of the diminutive Lilliputians and the gigantic Brobdingnagians; the time signatures seem overinflated or underinflated for the styles of music that they accompany; and the performers have to reduce those time signatures in order to perform the music normally. Sounds like one delightful headache.

Sometimes the joke wasn't so obvious. The fourteenth and fifteenth centuries were a time of artistic subtlety and intrigue, where a lot of music challenged its performers and listeners to solve its riddles and deduce its hidden messages.

Occasionally this air of intellectual puzzling was able to meld itself seamlessly with sacred meaning, as is the case in this motet for low voices from the first half of the fourteenth century. Its text deals with unrequited secular love, but its middle voice part cites a passage from the Song of Songs that is developed into more than just a liturgical allusion.

The text for this voice part reads "I am black but I am beautiful," but it can also read as "But black is beautiful." The joke in the music is that, despite black being beautiful in the words, the part itself is written out entirely in red-colored notes. Talk about reading between the lines!

For this presentation, the two groups integrated complex fourteenth-century vocal works with the material that Stockhausen composed. (The first minute of this track serves as originally adapted transitional material to get from Stockhausen's music to the motet.)

So far, we've explored some of the comical possibilities of eye music, but the technique was also used practically in order to accomplish things like conveying emotional drama, impressing a patron, or demonstrating how to perform a piece itself.

Sometimes, though, the colors and placement of certain notes and patterns were in the service of the mind. Jacob Senleches was a harpist and composer from late fourteenth-century France who may have used an extremely complex system of notational signs and symbols in order to help performers better learn and memorize his music.

Looking at Senleches's compositions in a manuscript makes it obvious how difficult the notation is to read.

Other composers, however, used eye music to make a game out of solving the puzzle of a particular work. They used what the Roman lyric poet Horace referred to as "art concealing art." On the surface the notation and the entire piece appear to be easy, but the riddle of performing a two-part work may be placed in only one line of music for the performers to deduce.

Johann Sebastian Bach was a master of this technique, as evidenced in some canons from his collection called The Musical Offering. In particular, the "mirror canon" and the "crab canon" are techniques that Bach used to transform a single line of music into two lines.

Let's listen first to the mirror canon, where a line of music is performed against its own inversion. In other words, placing the sheet music so that its reflection can be seen upside-down in a mirror displays the second part. The clue on the page is provided by the upside-down bass clef.

Rising to the challenge offered to him by King Frederick the Great of Prussia during a meeting that they enjoyed in 1747, Bach subjected a musical theme given to him by Frederick to a dazzling and ingenious array of transformations that would end up becoming the collection called The Musical Offering.

Another of these transformations is called a "crab canon," where a single line of music serves as a palindrome: that is, it can be performed in two parts by one player moving from left to right across the page and the other moving from right to left. The clue provided in the music is the reverse-facing time signature, key signature, and clef provided at the very end of the piece. One must wonder if the players' eyes crossed during performance...

Our program's featured release is a four CD set of the music of the Chantilly Codex.

It's performed by Crawford Young and the Ferrara Ensemble, and it is titled Figures of Harmony: Songs of Codex Chantilly.

The codex itself is arguably the most well-preserved instance of a musical document detailing polyphonic French vocal music of the fourteenth and early fifteenth centuries.

There's another well-known example of eye music from this time that was transmitted in normal notation in the Chantilly Codex but took on a radically different guise elsewhere. By Jacob Senleches, it is called "La harpe de melodie," and as one could guess, the music itself is in the shape of a harp. This pictorial representation can be found in a manuscript that is now housed in Chicago's Newberry Library.

The strings of the harp serve as the lines of a musical staff for two of the three parts. A ribbon snaking around the pillar of the harp provides the riddle that, when solved, informs the performers how to play the third part.

Here's one splendid example of everything that was gloriously complicated about fourteenth-century music in France!

Even more elaborate than Senleches's contributions to the Chantilly Codex is a work that is unique in just about all of its aspects. It is one of only two Latin-texted ballades in the codex. It's also one of only two ballades for two voices in the codex, and its notation is rife with allusions and text painting, with specific red-colored notes graphically depicting in eye music the bloody teeth of the evil, wild beast referenced in the texts of the piece. Word placement and clever puns support the caustic text and its target, most likely Pope Innocent VII. As if all of this wasn't enough, the notation itself is monstrously difficult to decipher, with proportions and special note shapes at every twist and turn.

Let's listen now to "Angelorum psalat," (a work that may very well represent one of the epitomes of musical accomplishment in the fourteenth century). It was composed by a shadowy figure named only as Rodericus in the Chantilly Codex.

The writer for this edition of Harmonia is Benjamin Robinette.