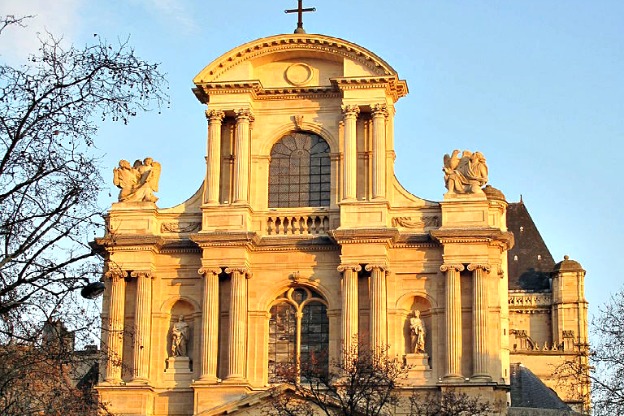 This year, Plectra Music put out Davitt Moroney’s recording of all of François Couperin’s Pièces de Clavecin along with his preludes from  L'Art de Toucher le Clavecin. Also in 2012, Ambronay Records released a CD of Christophe Rousset performing harpsichord works by Louis Marchand and Jean-Philippe Rameau. The three French keyboard composers represented on these recordings-Couperin, Marchand and Rameau-all lived about the same time as Bach, and while these three Frenchman may never have had dinner parties with Bach, they may have at least crossed paths.

Starting with Uncle Louis in 1653, followed by François’ father, the Couperin family lived and worked at the St. Gervais et St. Protais Church of Paris for roughly the next two centuries. They lived off and on in a house which was attached on one side of the church.  That residence is still there, and so is the organ François Couperin used to play.  Click here for a picture of that organ.

In addition to his church work, Louis XIV appointed Couperin to his court in 1693.  Couperin also worked at another Royal Court nearby-the exiled Stuart court in Saint Germain en Laye. Couperin rented a country home there in 1710, and one of Couperin's pieces on Davitt Moroney's recording, called Les plaisirs de Saint Germain en Läye, references that time and place in Couperin’s life.

Marchand made a spectacular debut in Paris at the age of 20 in 1689, and eventually became organist at the Chapel Royal, rivaling Couperin as a keyboard artist and influencing Rameau.  Marchand’s two books of harpsichord music (1699, 1702) comprised classic suites like those of his predecessor D’Anglebert, as were the suites of Rameau’s first book: typically an unmeasured prelude was followed by the usual movements of a French suite – Allemande, Courante, Sarabande, Gigue, Gavotte, and Menuet.

For Marchand the harpsichord sound ideal is closer to D’Anglebert than to Rameau.  A profusion of ornaments sustains the sound, and he exploits the medium-low register rather than the treble one, enhancing the natural resonance of the instrument. Rameau’s music from his first book, published when he was but 23 years old, illustrates the idea that he later wrote about at length, that melody derives from harmony and not the reverse.

Christophe Rousset played on a restored harpsichord that was built in Lyon by Pierre Donzelague in 1716.  Louis Marchand was born and studied in Lyon, and Jean-Philippe Rameau spent the years from 1713 to 1715 in Lyon.  And, it was in Lyon that Rameau befriended the harpsichord builder, Donzelague.  Together they conceived an instrument that became standard in the 18th century with a range of five full chromatic octaves.  This is the instrument on which Rousset recorded the music of Rameau and Marchand.

Davitt Moroney used two different original harpsichords. First, he played on a  1707 harpsichord built by Nicholas Dumont.  It is an early Parisian harpsichord with a five octave range, restored most recently by John Phillips in Berkeley, CA. Phillips also restored the other instrument used on this recording.  The harpsichord by Johannes Ruckers is a 1627 model from Antwerp, which Nicolas Blanchet modified in Paris in 1701.