England And East Of The River 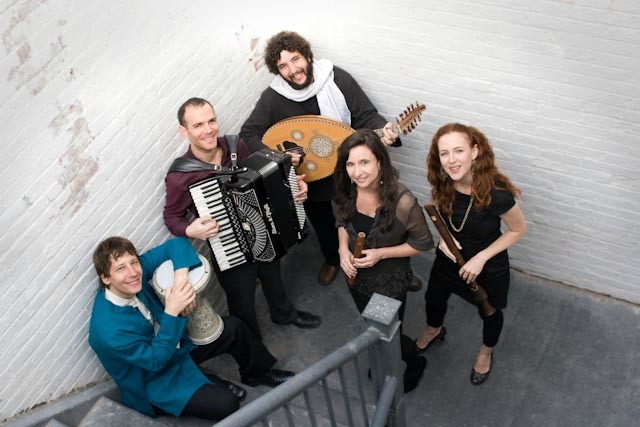 East of the River

The CD entitled Levantera (the word for a strong easterly wind in the Mediterranean) was released in 2013 by the ensemble East of the River. The two names on the front of the CD are those of recorder virtuosi Nina Stern and Daphna Mor. Three other musicians form their back-up band, playing instruments from the kanun, a plucked string instrument like a zither with a trapezoidal soundboard, to the jaw harp, also known as the jew's harp, or mouth harp, a small reed instrument with a bamboo or metal tongue that is placed in the player's mouth and plucked with a finger, attached to a frame. I bet you'll recognize the sound of the jaw harp when you hear it!

The repertory explored on Levantera comes from 14th-century England, to 18-century Armenia, to the 21st century with improvisation by the performers. To this unsophisticated ear, the widely various pieces share a certain sound that one might generally term "ethnic" that is defined by the sound of the augmented second in combination with "modality" – that is, music that is neither major or minor in classical terms.

There is lots of variety on this recording, with solos to be heard on the violin, oud, and frame drum; improvisations; and a large palette of colors created by combinations of percussion, string and wind instruments, including the chalumeau, an early version of the clarinet, and the nez, a nose flute, as its name implies, that enjoys wide popularity both geographically and chronologically.

And now for something completely different! Let's go back to England-the England of the 17th century. Strike the Viol is a 2012 release by Flora Recordings featuring viola da gamba virtuosi Philippe Pierlot and Rainer Zipperling, with Giovanna Pessi accompanying on the harp. None of our performers is English, but their chosen repertory is very English indeed, including music by composers Matthew Locke, John Jenkins and Christopher Simpson, not to mention that most prolific of composers of early music Anonyme!

The repertory in question is of several different styles. One is unaccompanied music for a two viols, or perhaps it is more accurate to describe it as self-accompanied. The tuning of the viola da gamba, which is very similar to the tuning of a guitar, renders it well-suited to the playing of chords, so the clever composer can, and certainly did, write music that combines melody and harmony.

Another style represented is one we encounter often, an improvisatory style in which a typically 8-bar harmonic pattern called a ground is repeated and on top of which the player makes variations, or divisions as they are called in 17-century England. It is pretty well the 17th-century English equivalent of a blues improvisation.

A third kind of repertory is also represented; that is dance music. Dance music, too, has always contained an element of improvisation. Imagine that you are a musician playing for dancers who has just been asked to play a tune over and over again. You might be inclined to vary that tune along the way, just as a dance band today might do!