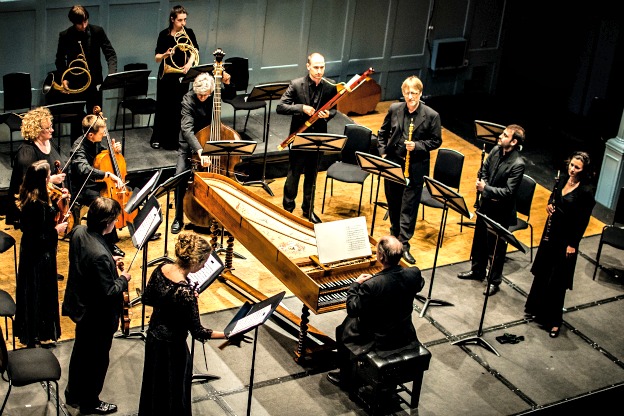 Today's podcast features a 2013 Linn Records double CD of Johann Sebastian Bach's John Passion. John Butt leads the Dunedin Consort of 10 singers and 15 instrumentalists, and they are joined, for reasons that will be clear in a moment, by the University of Glasgow Chapel Choir, directed by James Grossmith, and the Congregational Choir.

You might be thinking, "Do we really need another recording of this work?" Ah, but this one is quite different from all other recordings of the John Passion. The piece was first performed at the Thomaskirche in Leipzig in 1724. It was designed to fit into the Good Friday Vespers liturgy, whose focal point was the sermon that was delivered between the two halves of the musical setting.

Vespers on Good Friday was and is a very good opportunity to have one's music heard: you've got people in just the right mood and a socking dramatic story to tell, and your music sets the sermon, which was arguably the most part of the Lutheran service, into its context. That's a very different experience to have as a participatory congregation member than as a member of a concert audience.

On this recording, we are offered a complete Vespers service, which contains much more music than "just" Bach's John Passion. The service opens with a chorale prelude of Bach's, played on the organ by John Butt, followed by a 9-verse congregational chorale by Johann Hermann Schein on the same chorale tune, sung by all the assembled singers before the John Passion begins.

At the end of Part One of the Passion, we hear another organ chorale prelude followed by a congregational choral – chorale prelude. At this point in the liturgy we would have heard the sermon, and we are guided to a website where we can actually listen to a 40-minute sermon and intercession that was published in 1720, as well as to other supplementary commentary on the project.

John Butt is the first to admit that the service he presents on this CD set never took place, since we do not have a guide to the precise version of the melodies used for the chorales, and the Lutheran liturgy changed over the years. Even Bach's music is not a fixed entity, and it changed during his lifetime. The version that is presented in the most recent collected works of JS Bach, the Neue Bach-Ausgabe is one person's choice of an ideal version of the piece. It is this version that we have been hearing in recordings for the past few decades, and one that has attracted a certain amount of scholarly disapproval.

John Butt's version is different from the one found in the NBA. It is an attempt to reconstruct the 1739 performance, one which Bach had modified by the last performances he gave in 1749-50.

One difference you will hear is in the arioso "Betrachte, meine Seel," and following aria "Erwäge," which are scored for muted violins and organ rather than the earlier version for violas d'amore and lute. In this case John Butt is opting for the later instrumentation, since we know that Bach did not use the viola d'amore after the first performance. Yet he chooses not to adopt the toned-down language of the later version and retains the dramatic likening of Jesus' bloodstained back with the rainbow signifying peace after the flood.

Differences are also heard in the well-known aria, Zerfließe, mein Herze, or "Dissolve, my heart (in floods of tears)." In Bach's late version this aria is scored for violin and staccato marks are found, and that's the way Bach Collegium Japan has recorded it in one of their recordings.

But in today's featured recording, the Dunedin Consort adopts the woodwind version without staccato marking.

So enjoy this this recording that offers both distinct musical differences from other recordings of the music of the John Passion, and the added bonus of being able to hear Bach's Passion in the context of the liturgical setting for which it was composed.