Welcome to Harmonia…I’m Angela Mariani. When we think of big-city music in the eighteenth-century British Isles, London usually comes to mind. But Irish, English, and Italian musicians also were thriving in Dublin, which had been the second biggest city in the region for centuries. Dublin’s rich soundscape was home to a thriving theater and music scene and saw the premiere of Handel’s Messiah. This hour, early music from Dublin . . . Plus, Medieval music from Florence in our featured release Adiu, Adiu Dous Dame performed by La Rota.

With its severe stone walls, Christ Church Cathedral, Dublin, was first built by a twelfth-century Viking king with the fabulous name Sitric Silkenbeard.  During the Reformation, however, it became the seat of the Anglican State Church of Ireland.

The 16th-century madrigalists Thomas Bateson and John Farmer both spent time at Christ Church. Bateson and Farmer wrote music for church and secular use. We’ll hear Anthems “Holy, Lord God almighty” by Bateson and “The Lord’s Prayer” set by Farmer.

In the 1660s, choristers at Christ Church, Dublin were chastised in church records for singing with theater folks. Years later, some skilled choristers, not content only singing for services, formed the Hibernian Catch Club. We’ll hear some tunes—definitely not for church—by Thomas Bateson and John Farmer, who also wrote the sacred music we just heard. Here are “Come Follow me Fair Nymphs” by Bateson and “Stay, Sweet Love” by Farmer performed on a vintage recording by the Purcell Consort of Voices.

By the beginning of the 18th century, while Ireland it had its own Parliament, it was still firmly under the rule of the Kings of England, with political power mostly in the hands of the Anglo-Irish landowner class. The majority Roman Catholic population of Ireland, essentially colonized, was forbidden to own land or hold political power. This also had ramifications for the cultural life of cities like Dublin, where the classical music of England and the continent flourished.

Composer Thomas Roseingrave, born in 1691, studied with his father Daniel, who was an organist at Christ Church, Dublin. Roseingrave was a brilliant improviser at the keyboard, and his skill caught the attention of the young Domenico Scarlatti. We’ll hear Larghetto and Vivace movements from Thomas Roseingrave’s Flute Sonata No. 5.

Larghetto and Vivace from Flute Sonata No. 5 in C Major by Thomas Roseingrave. Spackling Band performed on their 2015 release, Airs and Dances from Dublin Castle.

It may have been Roseingrave’s relationship with Scarlatti that started the Scarlatti craze in the British Isles. Nearly 100 people, including several prominent composers, purchased Roseingrave’s edition of Scarlatti sonatas published in 1739. Here’s the Presto in B-Flat Major from Scarlatti’s Exercises for Harpsichord.

Welcome back! We’re listening to music from 17th and 18th century Dublin, where Italian composers were all the rage. When Francesco Geminiani arrived in Dublin in 1733, he played public concerts in a hall soon dubbed “Geminiani’s Great Room.” He’s also known for his instructional works, and occasionally wrote compositions inspired by Ireland and Irish music. Here is Geminiani’s arrangement of quote “An Irish Tune” from his “Rules for Playing in a True Taste.”

“An Irish Tune” from “Rules for Playing in a True Taste,” music by Francesco Geminiani, played by Spackling Band. Fun fact: This band’s name comes from Francis “Spackling” Dowdall, a musician who played in the orchestra at Dublin, and the members of Spackling Band include two of Dowdall’s descendants.

British and Continental composers were inspired by traditional Irish airs, but Irish trad music existed in a competely different social, cultural, and I daresay political milieu than that of the colonial Dublin classical scene. Various stories have circulated about a supposed meeting between Francesco Geminiani and the famous harper Turlough Carolan, sometimes known as O’CAROLAN. One legend has it that Geminiani and Carolan engaged in a friendly competition, with Geminiani playing some Vivaldi and Carolan repeating it by ear, to everyone’s amazement. The veracity of this story is doubted. Another tale states that Geminiani, having heard of Carolan, sent him an Italian-style concerto—or an Irish melody, depending on who’s telling the story-- with deliberate compositional errors. Carolan listened attentively and then declared that it was a pretty good piece but “limped and stumbled” in some places, and suggested corrections. Geminiani was thus convinced of Carolan’s genius. Here’s a tune known as Carolan’s Concerto – not a concerto at all, really, but a dance tune, in a famous arrangement recorded by the Chieftains in the 1990s.

A tune composed by the famous Irish harper Turlough Carolan, born in 1670, in an arrangement recorded in 1993 by the Chieftains.

In Dublin, Francesco Geminiani taught the London-born musician Matthew Dubourg and the two of them worked to promote what we might now call classical music performance in Ireland. Dubourg was appointed state composer of Ireland—Geminiani had been considered but declined. The details are vague – but it is doubtful that the prevailing Anglo-Protestant hegemony would have granted a state “anything” to a Roman Catholic. Dubourg went on to lead the premiere of Handel’s Messiah and directed many performances of Handel’s oratorios. In gratitude, Handel awarded him 100£ – equivalent to about $25,000 today! Here’s a Minuet and Rigadoon from Dubourg’s “Dance Suite” performed by Spackling Band.

And now for something completely different: For our featured release this week, we move from Baroque Dublin to Medieval Florence, with music from the CD Adiu, Adiu Dous Dame by La Rota. We’ll begin with the title track, “Adiu, Adiu Dous Dame” by Francesco Landini.

The extant Italian music of the trecento reveals the popularity of a beautiful, virtuosic, very florid vocal style. Here’s a love song by Gherardello di Firenze, followed by a lively dance called a “Trotto.”

Tobie Miller shredding on the hurdy gurdy with a 14th century “Trotto” – and before that, I’vo’bene, by Gherardello di Firenze, from our featured release Adiu, Adiu Dous Dame, by La Rota.

We’ll end by dancing the night away with a Saltarello performed on hurdy gurdy, vielle, or medieval fiddle, and the plucked string instrument called the gittern.

A dance called a “Saltarello,” from the late fourteenth century, performed by La Rota, from their CD Adiu, Adiu Dous Dame, our featured release this week.

The writers for this edition of Harmonia were Sarah Schilling and Angela Mariani. 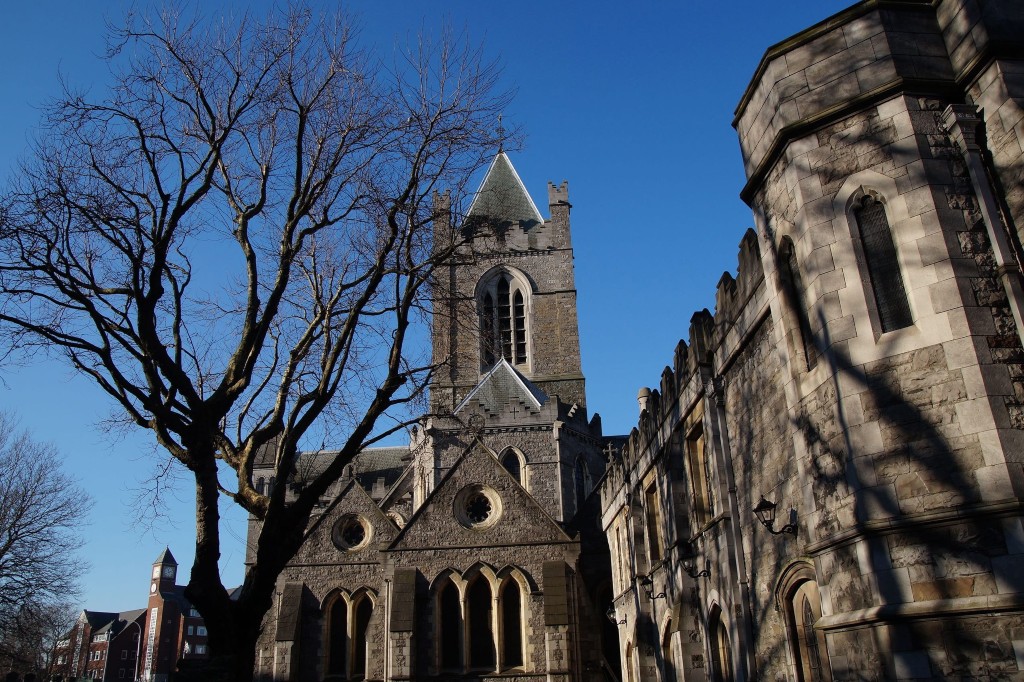 When we think of big-city music in the eighteenth-century British Isles, London usually comes to mind. But Irish, English, and Italian musicians also were thriving in Dublin, which had been the second biggest city in the region for centuries. Dublin’s rich soundscape was home to a thriving theater and music scene and saw the premiere of Handel’s Messiah. This hour, early music from Dublin . . . Plus, Medieval music from Florence in our featured release Adiu, Adiu Dous Dame performed by La Rota.