“Double, double toil and trouble; Fire burn, and cauldron bubble.” This hour on Harmonia, we’ll catch a fright listening to scary sounds for Halloween…but Halloween was not always reserved for ghouls, goblins, and trick-or-treaters! In addition to being a major holiday for the pagan and Wiccan world, some aspects of Halloween and the Day of the Dead also have roots in the Catholic church, as we will hear. Later on, we’ll explore songs, dances, and fancies for Shakespeare, on our featured release, The Food of Love, from the Baltimore Consort.

Music from our featured release, The Food of Love, we heard Tarleton’s Jig, and before that, “Bonny Sweet Robin,” performed by The Baltimore Consort — from their 2019 recording of songs, dances, and fancies for Shakespeare.

In the pre-Christian Celtic year, Samhain—s-a-m-h-a-i-n—was one of the “quarter days,” falling exactly between the solstices and the equinoxes. The others are Imbolc, Februrary 1; Beltane, May 1; and Lughnasadh, the first of August. Samhain marked the harvest and preparation for the dark part of the year, and celebrated what in Irish lore is sometimes called the “Thin places” – portals between this world and others. As with many pagan holidays, it was eventually absorbed in to the Christian calendar with the three days of Allhallowtide -- All Saints’ Eve, also known as All Hallows’ Eve – or Halloween – All Saints’ Day, and All Souls’ Day. And although today’s secular Halloween celebrations typically feature trick-or-treating and costume parties, the Roman Catholic holiday has also been celebrated since the Middle Ages. Let’s listen to the Gregorian chant proper for All Saints’ Day.

We heard Psalm 109, the liturgical music proper to All Saints’ Day. Schola Gregoriana Pragensis and the Gregorian Choir of Paris sang on that 2007 release Funeral Mass and All Saints’ Day Mass.

Late Medieval and Renaissance composers frequently set religious texts, for use in church on the appropriate feast day. Here is a motet by Flemish composer Philippe de Monte, composed for All Saints’ Day.

The Spanish Renaissance composer Francisco Guerrero wrote music for both All Saints’ Day and its vigil, All Hallows’ Eve. Guerrero’s Vespers for All Saints would have been heard at sunset on All Hallows’ Eve. Let’s listen to a movement from that work.

One of the other aspects of the appropriation of Samhain and other pagan observances was the demonization of the Wiccan tradition, for whom Samhain is one of the most profound observances of the year. This comes out not just in Halloween costumes, but in the characterization of witches in many works of early music, drama, and story. Here’s a quote “witches dance” by Robert Johnson and Nicholas L’Estrange, performed by the ensemble Les Witches.

Witches’ dances by Robert Johnson and Nicholas L’Estrange from the 1997 release Shakespeare’s Music.

The Halloween-variety characterization of witches is abundant in Shakespeare, as are references to musical works; and many of Shakespeare’s verses were set to music. Here Hecate, the goddess of witchcraft, chastises a trio of witches from Shakespeare’s Macbeth in the song setting “Come away, Hecate,” by Robert Johnson.

On to the music of more famous witches from the world of early music – the Wayward Sisters from Purcell’s Dido and Aeneas. Henry Purcell and librettist Tate’s witches laugh maniacally as they plot against Dido and Aeneas. Interestingly enough, witches don’t actually appear in the original version of Virgil’s Aeneid. When the opera premiered in the late 1680s, the revised story may have been engineered to compliment the English monarchy – where the hero Aeneas symbolizes Charles II, a Protestant, and the witches symbolize James II, a Catholic. In this way, pitting Dido and Aeneas’s fates against the witches serves as an allegorical representation of the way the troubled reign of Charles II played out against the potential reinstatement of the Catholic church.

We heard music from Dido and Aeneas, by Henry Purcell. Christopher Hogwood conducted the chorus and orchestra of The Academy of Ancient Music.

Welcome back! The holiday of Halloween or Samhain is partly about capturing the moment between life and death, as we see in the development of other practices such as the Day of the Dead celebrations. It also symbolizes the meeting place between worlds – like the worlds of humans and faeries. In this famous folk song, a woman named Janet encounters handsome Tam Lin, who has been captured by the faery folk. She goes through many trials and a terrifying encounter with the Queen of the Faeries in order to win him. This is Fairport Convention, from their 1969 recording Liege and Lief.

From the 1969 album Liege and Lief, Fairport Convention, with the traditional folk ballad Tam Lin.

Another famous, although somewhat less savory character who has a frightful experience with ghosts is Don Juan. A number of artists have memorialized the epic of the legendary libertine, including Molière, Byron, Mozart, and Gluck. Christoph Willibald Gluck’s ballet pantomime Don Juan was inspired by Molière’s 1665 play. At the end of the tale, a ghostly apparition appears, offering Don Juan a chance to redeem himself, but he squanders the opportunity. Because Don Juan refuses to repent, he ends up being swallowed into the earth amid thunder, lightning, and flames, as the breathing statue watches.

On our featured release, we’ll hear music for Shakespeare — the 2019 recording, The Food of Love: Songs, Dances, and Fancies for Shakespeare, comes to us from The Baltimore Consort. The recording explores music by Thomas Morley, John Dowland, and a variety of their lesser-known and anonymous Renaissance contemporaries. The Baltimore Consort was founded in 1980, with a mandate to perform the instrumental music of Shakespeare’s time, so, while they have expanded their scope in the decades since their founding, this recording represents a joyful return to their roots.

We heard The Baltimore Consort, that was Anthony Holborne’s “Heart’s Ease,” and before that, the anonymous 16th century broadside ballad, “Complain My Lute” — from our featured release, The Food of Love: Songs, Dances, and Fancies for Shakespeare.

The writers for this edition of Harmonia were Sarah Huebsch Schilling, Elizabeth Clark, and me – Angela Mariani. 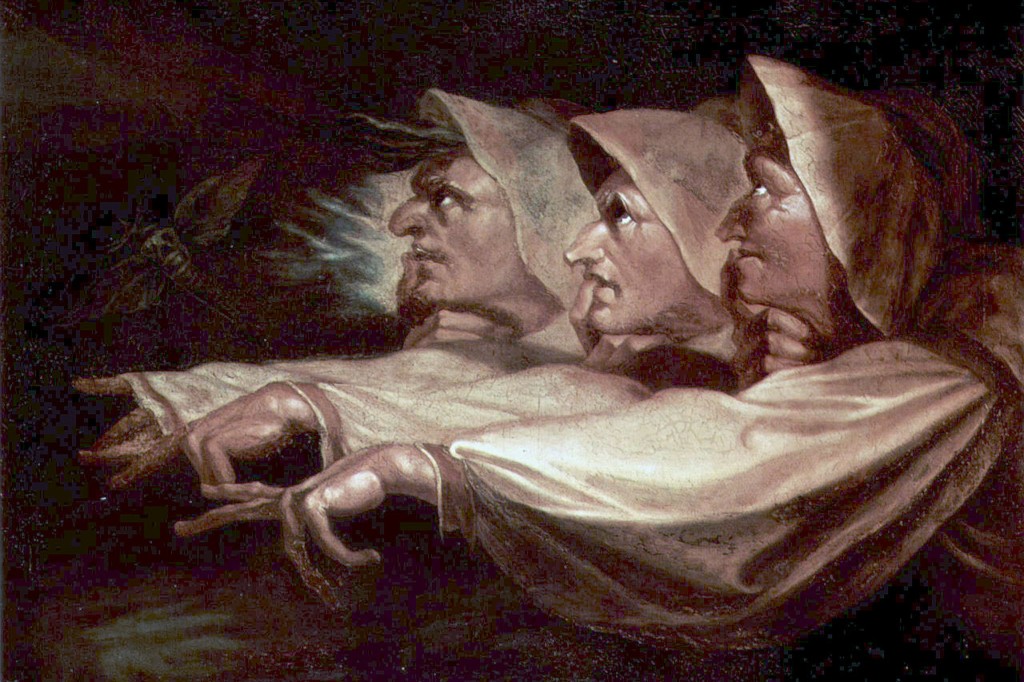 The Weird Sisters or The Three Witches, a painting by Henry Fuseli, 1783. (The Yorck Project, Wikimedia)

“Double, double toil and trouble; Fire burn, and cauldron bubble.” This hour on Harmonia, we’ll catch a fright listening to scary sounds for Halloween…but Halloween was not always reserved for ghouls, goblins, and trick-or-treaters! In addition to being a major holiday for the pagan and Wiccan world, some aspects of Halloween and the Day of the Dead also have roots in the Catholic church, as we will hear.

Later on, we’ll explore songs, dances, and fancies for Shakespeare, on our featured release, The Food of Love, from the Baltimore Consort.