“The Lord is my shepherd; I shall not want.
He makes me to lie down in green pastures;
He leads me beside the still waters.”

This hour, we shall not want for musical settings of the words of King David; his many psalms, his tragic laments, and his instrument of choice—the harp. Plus, our featured release is Sansara: Cloths of Heaven.

Psalm 118:  “Give thanks to the Lord, for he is good,” composer Salamone Rossi’s setting of the Hebrew text, from Rossi’s collection of Jewish liturgical music, The Songs of Solomon.

Psalm 63: “I will be fully satisfied as with the richest of foods; with singing lips my mouth will praise you,” so writes King David, lifting his voice in praise. David is perhaps the most famous musician of biblical times. Both an underdog and a ruler, David is credited with writing more psalms than any other author. In Psalm 53, David is in the desert of Judah, and he writes “You, God, are my God, earnestly I seek you; I thirst for you, my whole being longs for you, in a dry and parched land where there is no water.” We hear this longing in Claude Le Jeune’s setting for three voices, chasing each other.

Psalms have been used in congregational singing for hundreds of years. During the Reformation, psalms were modified so that worshippers could sing in vernacular languages. Some composers took even more liberties with psalm texts—loosely translating them for use outside the church. Benedetto Marcello set 50 Psalms of David using texts by his Arcadia Academy colleague Girolamo Ascanio Giustiniani. We’ll hear Marcello’s setting of Psalm 28.

In paintings, King David is most often shown playing harp—though he occasionally plays lyre or even portative organ. On one of the columns in Chartres Cathedral, there is a sculpture of David playing the harp. While it probably doesn’t bear much resemblance to the one David himself would have played, it is more typical of the sort of harps singers might have used to accompany themselves in the 12th century, when the sculpture was made. Present-day creators of medieval instruments have used this very sculpture as a model for many of their harps. Benjamin Bagby used one such “new medieval” instrument to accompany himself – and the other singers of Sequentia – in a performance of Dolorum solatium, David’s lament for the deaths of Saul and Jonathan, by the 12th-century philosopher and poet, Peter Abaelard.

“To my strings I now give peace – if only I could do the same to my laments and tears! In plucking with wounded hands, in lamenting with hoarse notes, my spirit fails.” Benjamin Bagby played harp and sang—along with the other singers of Sequentia – performing King David’s lament for the deaths of Saul and Jonathan, Dolorum solatium, by the 12th-century philosopher and poet, Peter Abaelard.

German Baroque composer Heinrich Schütz set many psalms of David to music. Psalm 6 is a prayer for mercy in times of distress—we’ll hear his setting for eight voices and basso continuo, Ach Herr, straf mich nicht.

Oh Lord, do not punish me in Your anger. The 6th Psalm. Set by Heinrich Schütz. Cantus Köln and Concerto Palatino were led by Konrad Junghanel.

From David’s instrument and his psalms, we’ll turn our attention, now, back to his tears. David’s third son, Absalom, rebelled against his father and tried to overthrow him. Absalom’s death during the battle of Ephriam’s Wood left David wracked with grief, and many composers have created music inspired by the brief passage from the book of Samuel that describe his lament. One such composition, from the Renaissance, is found on our featured release this week: Sansara: Cloths of Heaven. It’s the debut recording of a chamber choir made up of young professional singers from across the United Kingdom, who work together without a single director or conductor. We’ll hear their performance of the motet, Lugebat David Absalon, by franco-flemish composer Nicolas Gombert.

Lugebat David Absalon, “David mourned for Absalom.” A motet for eight voices by Nicolas Gombert. We heard the chamber ensemble Sansara, from our featured release, Sansara: Cloths of Heaven. 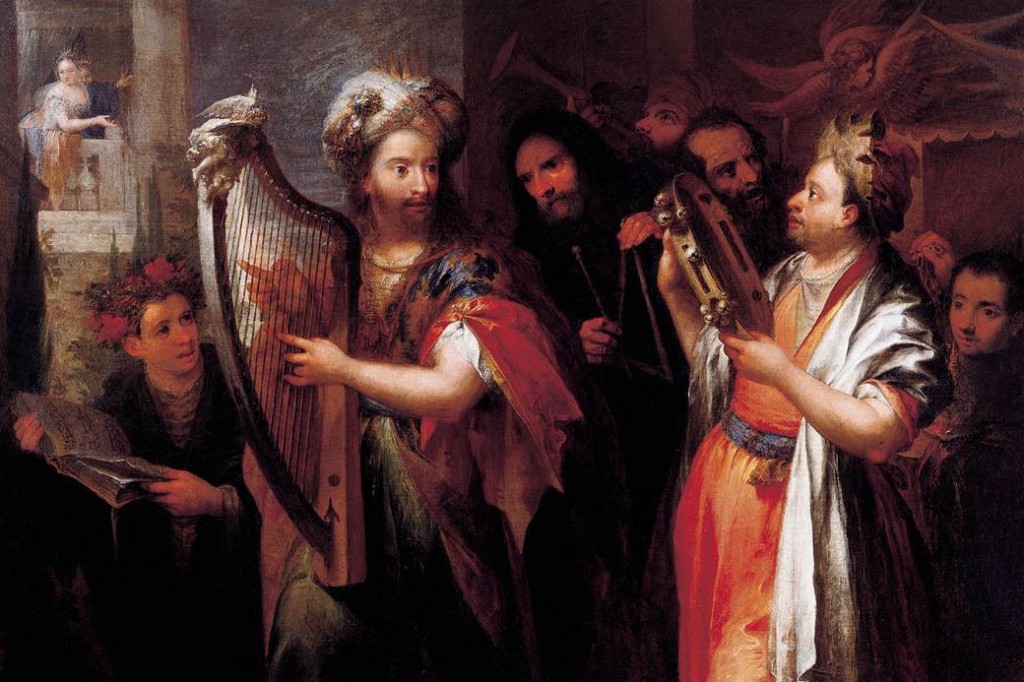 “The Lord is my shepherd; I shall not want.
He makes me to lie down in green pastures;
He leads me beside the still waters.”

This hour, we shall not want for musical settings of the words of King David; his many psalms, his tragic laments, and his instrument of choice—the harp. Plus, our featured release is Sansara: Cloths of Heaven.