Dancing In The Court Of The Sun King 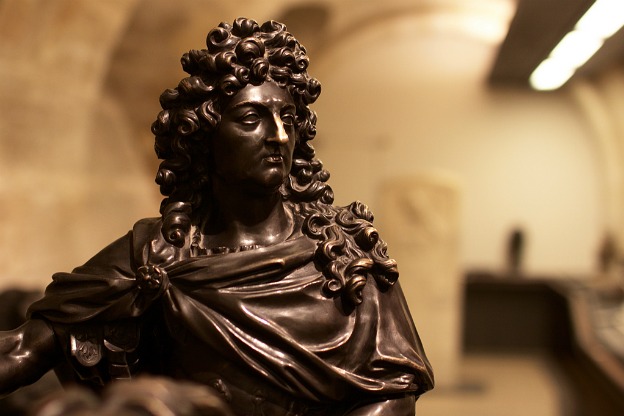 Time capsule for this episode: 1545

During the 17th century, Versailles was an oasis of baroque opulence and artistic splendour.  Louis XIV, le Roi-Soleil (or "the sun king"), saw to it that his palace set the standard for magnificence.  Every wall was weighed down with artwork, and within those walls, music and dance enjoyed a prominent and lively place.

Louis XIV was among his century's greatest patrons of the arts, who himself cultivated a talent and fondness for dancing.  The king's great love of dance inspired the composition of many ballets by artists he employed.

One of the most prolific and talented composers at the court of Louis XIV was Jean-Baptiste Lully.  Lully spent much his life in the service of Louis XIV, starting off as a dancer and then moving up the ranks to become a court composer and the leader of the king's dance band Les Petits Violons.

It is said that Louis XIV danced in many of the ballets that Lully composed.  When the King's feet tired, Lully turned his attention toward opera.  The groundbreaking style of opera Lully cultivated, called the tragédie en musique, tragédie lyrique, or French lyric tragedy, rejected Italian operatic conventions, suiting itself instead to the lyrical cadence of the French language.

The bagpipe, an instrument that evokes the Scottish Highland and has a history going back to time immemorial, was in much wider use than many believe.  Bagpipes make their earliest appearances in iconography from the early second millennium.  For example, the Castilian Cantigas de Santa Maria, a monumental collection of monophonic music from the thirteenth century, includes several illustrations of bagpipe playing.

Bagpipes of different types were played throughout Europe and known by different names. Zampogna is a general term for many double-chantered Italian pipes.  Typically, these pipes pair a soprano chanter with a bass chanter.  The soprano chanter is designated ritta, or "right," and the bass chanter magna, or "left.  Zampogna is related to the Greek word simponia, which meaning "a single beating reed."

Interestingly, its Romanian counterpart, cimpoi, or "symphony," means "many sounds playing together."  Often the zampogna plays folk music alongside shawms.  The shawm usually takes the melody, while the zampogna accompanies with drones and harmonies above and below.

In Germany, initial evidence of the bagpipe arrived in the 12th century.  The monk John "Cotton" Affligem wrote of the instrument, calling it the "musa."  Over the centuries the "musa" was, again, paired with the shawm, playing arrangements of both monophonic and polyphonic music.

The basse danse, a likely precursor to the popular pavane, was a type of dance that flourished during the 15th and 16th centuries.  The dance took off particularly in territories within the Burgundian State during the reign of Charles "the Bold."  According to record, the dance steps accompanying the basse danse's alternating duple and triple meters were usually slow, stately, and refined.  The very name basse danse implies a groundedness stemming from both music and movement.

An early subset of basse danse was built around a melody played in long, equal note values.  This melody is called a tenor.  It is believed that, around the basse danse tenor, one or more parts were improvised.  When performing basse danses for various courtly and country entertainments, musicians could pick up a variety of instruments; although it is believed that those most preferred were loud winds, like the shawm, slide trumpet, and sackbut.

On our featured release, the vocal ensemble Anonymous 4 returns "to the heart of their favorite century," presenting polyphony and sacred Latin song from the Codex Las Huelgas.  Anonymous 4's 2011 recording, Secret Voices, is a testament to the vocal virtuosity and musical genius of one hundred or so nuns who are known to have sung together at the Abbey of Santa María la Real de Las Huelgas near Burgos, Spain.

Despite conventions barring women from singing complex polyphony, many believe there is a high likelihood that these conventions were breached.  Imagine some of the finest and most demanding repertoire from the 13th century beautifully rendered by women's voices!