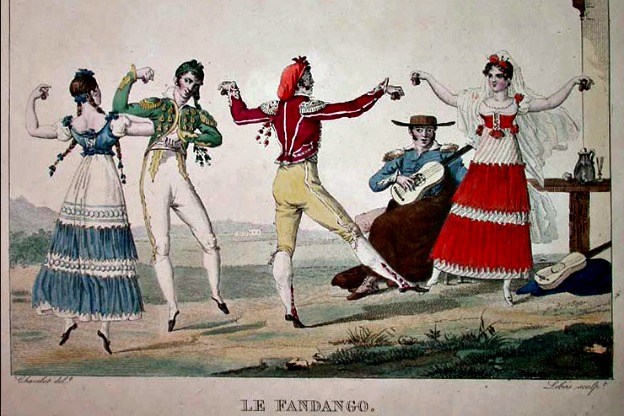 Can you dance a Polonaise? Would you do the Fandango? Bust a move to a medieval estampie? Music and dance have long been like-minded partners. Join us at the intersection of movement and sound as we dance the hour away on this edition of Harmonia. Plus, we'll hear music from a featured recording of neglected masterpieces performed by Ensemble Correspondances.

Before we step onto the dance floor, let's take a sneak peak at our featured release: a 2013 recording from harmonia mundi of sacred vocal music by Marc-Antoine Charpentier. Ensemble Correspondances led by SÃ©bastien DaucÃ© performs the Sacrificium Deo spiritus contibulatus from Charpentier's Miserere. This motet setting of Psalm 50 was probably first sung during Holy Week in 1685, and we'll hear more from this recording later this hour.

The earliest known fandango melody is found in an anonymous collection from 1705, the Libro de diferentes cifras de guitarra, housed in the National Library in Madrid. The triple meter dance was traditionally done by couples to the accompaniment of guitar and castanets.

Several 18th-century accounts describe the fandango in exceedingly sensuous terms-so much so, that the church threatened to ban the dance! In fact, according to a 1764 account by P.A. Beaumarchais, the fandango went on trial. But happily, after witnessing a performance of the dance, the pope and cardinals pardoned the accused fandango of any offense.

The fashionable fandango spread throughout Europe: Mozart used it in his Marriage of Figaro, and a fandango even shows up in one of Beethoven's sketchbooks. Coming up, we'll listen to some earlier versions: first, a fandango for guitar by Santiago de Murcia, and following that, we'll hear how Rameau incorporated the dance into one of his harpsichord suites.

Michael Praetorius's Terpsichore is an impressive collection of over 300 renaissance dance tunes that has come to be one of the great delights for early music fans and performers alike. But an English contemporary of Praetorius by the name of William Brade also published several smaller and less well-known collections. We'll hear several dance movements from both of these composers' collections compiled into a set titled "Ballo III," and performed by the Capriccio Stravagante Rennaissance Orchestra.

Listen for the magnificent and varied combination of sounds, timbers and tone-colors in these performance of dances by Brade and Praetorius!

Imagine a medieval entertainer-a minstrel, a busker, a storyteller, a musician, an actor, a dancerâ€¦perhaps the estampie was part of his performance!

As long as there is music, there will be dance. And one prolific 18th-century composer, Georg Philip Telemann, was master of many styles of dance music-not only French and Italian forms like we would expect of such a cosmopolitan gentleman, but Polish styles as well.

One of Telemann's first encounters with Polish music made quite an impression. In his autobiography, Telemann recalled one occasion on the Polish-Hungarian border where he heard no fewer than 36 bagpipes and 8 violins play together! Keep those bagpipes in mind. Up next, we'll hear two of Telemann's compositions that draw on the Polish Hanac dance with some traditional folk music from Poland in between.

Our featured recording is a 2013 release from harmonia mundi by Ensemble Correspondances.

Formed in 2009 while at the conservatory in Lyon, the relatively new ensemble mainly performs 17th-century French sacred music, championing a repertoire of neglected masterpieces just waiting to be heard, including several six-part motets that Parisian composer Marc-Antoine Charpentier wrote and performed in the service of his patron of nearly two decades, Mademoiselle de Guise. Here's Charpentier's Annunciate superi â€“ a devotional piece in adoration of the Virgin Mary.