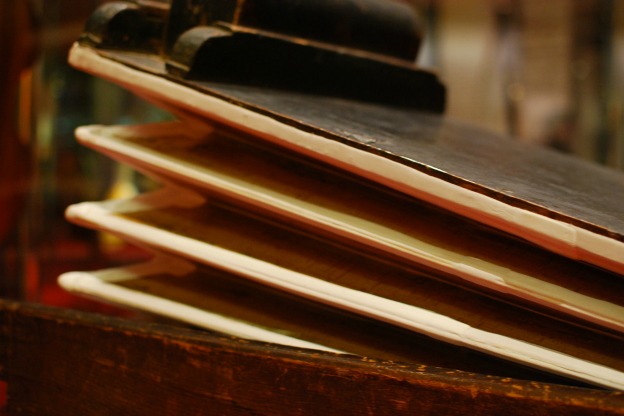 Let's start of with a sneak-listen to the Adagio and Vivace movements from Bach's Sonata in G major for violin and basso continuo performed by Chatham Baroque from their 2013 release titled Bach and Before.

This sonata is relatively new to the known Bach repertory, as it was rediscovered only in 1929 in a collection in Eisenach. One interesting thing about this piece is that the bass line is nearly identical to another of Bach's works-a trio sonata for violin and flute. Stay tuned! We'll be hearing more from Chatham Baroque later in the program.

Instruments of note by Athanasius Kircher

For a scholar, the German Jesuit Athanasius Kircher got a great deal wrong. Authoring over 30 works in the mid-1700s, Kircher lovingly catalogued the fanciful, the crackpot, and the half-true.

Take, for example, the Central American sloth-in Kircher's writing, a kind of ape which "perfectly intones the first elements of music." Or Kircher's statement that magnetic forces compel the sun to revolve around the earth.

Later scholars have judged Kircher harshly: in 1906, John Ferguson wrote of Kircher that, "his works in number, bulk and uselessness are not surpassed in the whole field of learning."

But Kircher's writings, especially on music, are full of hints about music-making in his time and place. In his 1650 treatise Musurgia Universalis, Kircher includes a detailed, illustrated catalog of instruments played in his day.

Of these, one of Kircher's favorites was the organ. In one memorable passage, he used an organ to portray the creation the world, with each of the six creation days described in Genesis corresponding to a stop on the organ.

Kircher may have loved the organ, but he gave each instrument family a thorough going over, cataloguing such little-known plucked instruments as the tortoise and the mandora, as well as wind and stringed instruments better known today.

Among these was the natural trumpet, which Kircher held up as proof of his musical theories: "You see, therefore, how much nature abhors dissonances, so that the trumpet would rather burst than allow them."

Of course Kircher, being Kircher, wasn't content with reality. Scholar David Whitwell notes that Kircher included in his treatise a tale (no pun intended) about a "cat organ," which is pretty much what it sounds like.

The story goes something like this. An actor was trying to cheer up a sad prince so he gathered together some cats and put them in a specially designed box. He secured their tails through holes in the box, arranging them "tonally according to their different sizes." He added keys fitted with sharp points instead of mallets, andâ€¦well, Kircher goes on to describe what happened when the instrument was played and the cats' tails pricked, "they, driven to a rage, with miserable voices, howling now low, now high, produced such music made of the voices of cats as would move men to laughter and even arouse shrews to dance."

Not so funny nowadays... And no! We'll not be hearing any cat organ on this program!

But, Kircher is also thought to be the first person to describe making music using drinking glasses, so he would probably appreciate this next selection, a Minuet in G by Wolfgang Amadeus Mozart performed by the drinking glass virtuoso Erik Hansen.

We've finished our look at one eccentric organist, and now we'll go on to meet some cranky ones!

The popular image of the organist is almost beatific: a humble old man, or perhaps a little old lady, who totters to church week in and week out to hammer through hymns and hands out candy to children.

In Restoration England, though, things were a little different, as scholar Ian Spink describes in his recent book Restoration Cathedral Music. According to Spink:

"Seventeenth-century cathedral organists seem to have been a troublesome bunch, frequently quarrelsome and insubordinate, or simply lazy and incompetent, sometimes apparently patho[lo]gically defiant of authority and morally depraved."

What drove these men to depravity?Â Spink suggests that low wages and annoying bosses, "â€¦helped to exacerbate natural prickliness and, in some cases, mental instability."

We'll embrace prickliness in our next pieces: compositions by men employed as organists during the seventeenth century.

Let's begin with music by Thomas Weelkes. Weelkes was serving as organist at Chichester Cathedral in 1613 when he was charged with public drunkenness. Weelkes had a history of unexcused absences, and he was cited to the Bishop as "noted and famed for a comon drunckard and notorious swearer & blasphemer."

For sheer curmudgeonliness, it was difficult to outdo composer, organist, and priest Christopher Tye.

According to the diarist Anthony Wood:

"Dr. Tye was a peevish and humoursome man, especially in his latter dayes, and sometimes playing on ye organ in ye chap.[el] of qu.[een] Elizab.[eth] wh.[ich] contained much musick but little delight to the ear, she would send ye verger to tell himÂ he play'd out of tune: whereupon he sent word that her eares were out of Tune."

When it came to tormenting his Queen, Tye did not restrict himself to organ music.Â He was a master at composing for both choir and consort, as we'll hear in two pieces.

Organist and composer Matthew Locke dueled in his youth and upbraided fellow musicians for perceived deficiencies.Â But Locke's biggest claim to fame was engaging in a bitter, no-holds-barred war of letters with fellow scholar Thomas Salmon, whom he called, among other names, "purblind," "sparrow-nos'd" and "hunchback'd."

Life as an organist seems to have been especially unhappy for Jeremiah Clarke. Three years after being sworn in as joint organist of the Chapel Royal, a prestigious position if ever there was one, Clarke shot himself to death. Gossip put it down to a mental break following an unfortunate love affair.

It's perhaps particularly cruel then, that Clarke is known today almost exclusively for his "Prince of Denmark's March," a wedding stalwart featured on countless albums with names like The Perfect Autumn Wedding, and True Romance.

This week we're featuring a recording from the Pittsburgh-based ensemble, Chatham Baroque.

Titled Bach and Before, their 2013 release contains works by composers who championed the so-called stylus phantasticus.

Rooted in the practice of virtuosic organ improvisation, the fantastic style, (to paraphrase our friend Athanasius Kircher just once more!), was music composed to be free, unbound and unrestrained. Johann Mattheson later described the style as something "now swift, now hesitatingâ€¦without measure of sound, but not without the intent to please, to overtake and to astonish."

Stylus phantasticus flourished in Austria, in particular at the Viennese court, where the Italian born composer Antonio Bertali lived and worked for most of his life.