Imagine being a singer in your late 20’s in the Sistine Chapel choir, with Josquin des Pres as a colleague. That was the fate of Costanzo Festa, who was one of the first Italians to join the ranks of the distinguished northern musicians so prominent in Rome before the mid-16th century. On Harmonia this hour we explore the work of Costanzo Festa, an Italian composer who sang in the Pope’s choir for nearly 30 years in the 16th century, and who was very highly-regarded in his own time, though we don’t hear much about him these days. Plus, music from our featured release, Serenissima: Renaissance Europe on Venetian Viols, by the Rose Consort.

This hour on Harmonia we’re going to hurtle ourselves back in time to the papal chapel of the early 16th century. The second son of Lorenzo the Magnificent, Giovanni di Lorenzo de’Medici was Pope Leo the Tenth, the last pope NOT to have been in priestly orders at the time of his election to the papacy. The Sistine chapel, which got its name from the Pope who commissioned it, Sixtus the fourth--was a new building, and the members of its choir of twenty four included people like, oh, perhaps the most famous renaissance composer of all, Josquin des Pres. But this week’s time traveling adventure is not for the sake of Josquin - we’re here to visit the work of one of the earliest Italian composers to make a name for himself in early C16 Rome, Costanzo Festa.

Festa may have been from the very northwest of Italy, near Turin, that region at the foot of the Alps known for its sophisticated cuisine and wine. Festa was employed on the Island of Ischia [EEs-kya] in the Bay of Naples as a music teacher for members of a powerful Neapolitan princely family, and a document recording this engagement refers to Festa as ‘musico celebrato’.  The earliest notice we have of Festa as a composer is a piece that is attributed to him to commemorate the death of Queen Anne of Brittany, who died on January 9, 1514.  The piece in question asks:

“Who will give our eyes a fountain of tears to weep day and night before the Lord?”

We heard the ensemble Doulce memoire, Denis Raisin Dadre, director, singing Costanzo Festa’s lament on the death of the Queen of France in 1514, from their 2011 Zig-Zag Territories CD Requiem d'Anne de Bretagne.  Ludwig Senfl borrowed this same motet when the Emperor Maximilian died in 1519. Not a great deal changes in Senfl’s text: Britannia becomes Germania, Francia becomes Austria, and – a bit trickier - Anna becomes Maximilianus.  Senfl’s setting has been known for a long time, but Festa’s original was only relatively recently re-discovered.

In 1517 Festa joined the papal chapel in Rome. From this period comes a whole group of motets in the Medici codex, including Festa’s setting of Inviolata, integra et casta es, a well-known prayer to the spotless and pure mother of Christ that dates back to the eleventh century:

Capella Pratensis, directed by Joshua Rifkin, sang the motet Inviolata, integra et casta es on their 2010 Challenge Classics CD Vivat Leo! - Music for a Medici Pope. About Leo X, who was Pope from 1513 until his death in 1521, one biographer writes, quote: “From his youth Leo, who had a fine ear and a melodious voice, loved music to the pitch of fanaticism.” End quote. So it was a very good time to be a singer in Rome! Let’s hear another motet by Festa performed in a rather different style. The performers here are searching for a vocal quality that was known just a bit later in the century as “cantar sodo, alla romana,” “a hard vocal tone according to the Roman style.” The all-male voices are augmented by sackbuts.

That was the Concerto Luano, led by Alessandro Quarta, performing Costanzo Festa’s Hyerusalem quae occidis prophetas, from the 2012 Christophorus CD entitled Luther in Rome, which speculates about the music Martin Luther might have heard in his trip to Rome in 1511.  It might be a bit of a stretch for us to include Festa here, since Festa didn’t go to Rome until 1517, but what a wonderful piece all the same.

Welcome back. He was a master of the Netherlands contrapuntal technique and composed a great deal of liturgical music, but Costanzo Festa was also known as one of the earliest of the Italian madrigalists. In fact, though it seems more was planned, the only contemporary publication of his music is a book of three part madrigals that was very popular, reprinted many times. Let’s hear Festa’s Italian side in a frottola in 4 parts about an encounter between a shepherd and shepherdess – Not to be a spoiler, she tells him at the end that if he has no money, he should just go on his way.

One other relatively recently discovered work of Festa’s deserves special mention. Long thought to be lost, Festa’s “contrapunti” were found in 1985, misattributed to G. M. Nanino. The unique manuscript contains more than 150 settings of the well-known basse danse tenor melody La Spagna in 3 to 12 parts. Let’s hear some of those settings, two on renaissance flutes, then two on renaissance violas da gamba:

We’ve already heard a bit of our featured  release this hour, the Rose Consort’s “Serenissisma:  Renaissance Europe on Venetian Viols.” Here’s a short setting of the famous “In nomine” chant melody, used by many Renaissance composers as the basis for polyphonic consort compositions. This one is by English composer Christopher Tye, and is called “Howld Fast.” This is possibly more of an instruction to the players than a title, since the rhythm of the interwoven parts gets very tricky at a few points.

“Howld fast,” a setting of the In nomine chant melody by English composer Christopher Tye, played by the Rose Consort, from our featured release “Serenissima: Renaissance Europe on Venetian Viols.” Let’s end with dance music from another English composer: a Pavane, or Pavan, and Galliard by Anthony Holborne.

Music of Anthony Holborne, played by the Rose Consort, from their Delphian CD Serenissima: Renaissance Europe on Venetian Viols-our featured release this hour on Harmonia. 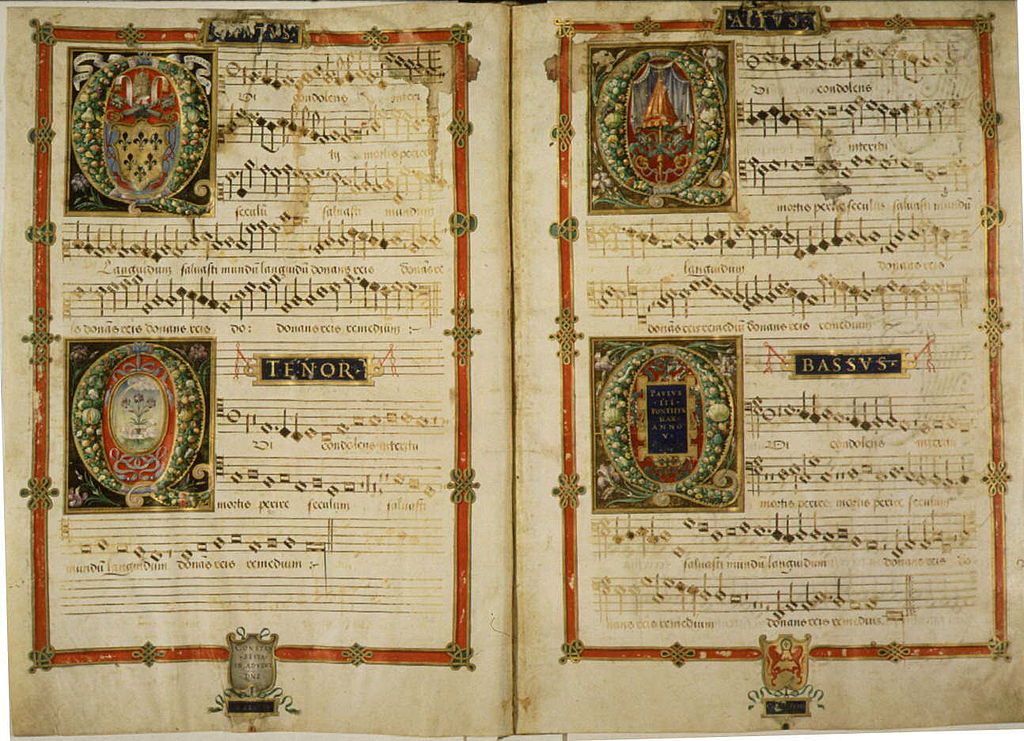 Imagine being a singer in your late 20's in the Sistine Chapel choir, with Josquin des Pres as a colleague. That was the fate of Costanzo Festa, who was one of the first Italians to join the ranks of the distinguished northern musicians so prominent in Rome before the mid-16th century. On Harmonia this hour we explore the work of Costanzo Festa, an Italian composer who sang in the Pope's choir for nearly 30 years in the 16th century, and who was very highly regarded in his own time, though we don't hear much about him these days. Plus, music from our featured release, Serenissima: Renaissance Europe on Venetian Viols, by the Rose Consort.