Welcome to Harmonia…I’m Angela Mariani. Christian IV of Denmark and his brother-in-law James Stuart of England knew how to throw a party! Hard-drinking and raucous revelry abounded. At one masque performance, the players were so intoxicated that they forgot their lines and fell to the ground in what one observer called a “drunken fiasco.” King Christian’s fondness for the British Isles informed his musical patronage, as we’ll hear this hour on Harmonia, as we sample music from Christian’s court at Copenhagen. Plus, our featured release by ensemble La Gioa Armonica explores 18th-century music for psaltery.

Nigel North, lutenist, performing with the viol consort Voix Humaines. We heard “Lachrimae Antiquae” from Lachrimae or Seven Teares by lutenist and composer John Dowland. Along with several other British musicians, Dowland worked in the court of Danish King Christian IV.

Christian IV of Denmark succeeded his father as ruler of Denmark and Norway at the age of 11. Regents ruled in his stead until he came of age, but then Christian quickly built up the cultural and military prowess of his kingdom. Although his military and colonial pursuits weren’t always successful, his patronage of architecture--and especially of music--were substantial. At Christian’s coronation, there were 71 musicians including singers, instrumentalists, and trumpeters. Let’s begin with music by Mogens Pedersøn, musician to the royal chapel of Christian IV. We’ll hear an Easter Kyrie and “Deus misereatur nostri,” both for 5 voices.

Christian IV was enamored with Italian musical style, especially Venetian master Giovanni Gabrieli. In 1599, he sent several musicians to Venice to study with Gabrieli. The group included Mogens Pedersøn [MO-uhns Pay-ther-søn], Hans Nielsen, and their mentor Melchior Borchgrevinck. Pedersøn and Nielsen even went back to Venice a second time, and returned home with the Italian madrigal, to the joy of their patron. We’ll hear excerpts from Pedersøn’s, Second Book of Madrigals.

“Non garir, Augellino,” and “S’ancor tu amante sei” from Mogens Pedersøn’s,] Second Book of Madrigals. Anthony Rooley directed the Consort of Musicke with soprano Emma Kirkby [on the 1988 recording Music from the Time of Christian IV: The Madrigal from the South to the North].

The Danish-Italian admiration went both ways: Orazio Vecchi praised the Copenhagen composers in the dedication of his 1604 publication, Le veglie di Siena. Vecchi mentions that Melchior Borchgrevinck, and all the musicians of Christian IV’s chapel, had Gabrieli’s respect--and that they were well regarded throughout Europe. Here is music from Vecchi’s Le veglie di Siena.

You can hear highlights from recent and archival concert recordings of early music and more on Harmonia Uncut -- our podcast, curated and hosted by Wendy Gillespie. Listen online at harmonia early music dot org and at your podcast platform of choice.

Welcome back. We’re exploring music from the royal chapel of Christian IV, Renaissance king of Denmark and Norway. Christian’s admiration of foreign artists did not end with Italians. He also hired German, Polish, Dutch, and British musicians to teach his children and entertain him at court. Thomas Robinson was a long-time music tutor of Christian’s mother, Queen Sophie, and his sister, Princess Anne. Here is “A Plaine Song,” and “Spanish Pavan” by Thomas Robinson.

When Denmark lost some financial standing due to a war with Sweden, Christian sent some of his top musicians to England to work for his sister, Princess Anne, wife of James Stuart VI. Anne’s musicians included famous Danes Mogens Pedersøn, Hans Brachrogge, Jacob Ørn and Martinus Otto.

There are even more examples of reciprocity between English and Danish royalty, courtiers, and musicians. Thomas Simpson was yet another British musician who worked in Copenhagen for Christian’s royal chapel. A viol player, composer, and music editor, Simpson published three collections of dance music. These included music by popular British composers of the time as well as some by himself. Much like Praetorius’s collection of dances, Terpsichore, Simpson’s collections include some music with tunes by other composers and his own harmonizations. Let’s hear a Courant and Volta by Thomas Simpson.

Courant, and Volta from a collection of dances by English composer Thomas Simpson. Ensemble Isabella d’Este was led by Ariane Maurette.

Of all the British musicians in the Danish court, Christian’s biggest catch was famed lutenist and composer John Dowland. Dowland complained that his own monarch, Elizabeth I, did not hire him, perhaps on account of his being Catholic. Yet, Christian surely made it worth his while to move to Copenhagen, paying him a salary equal to a navy admiral—a huge sum for a musician. Dowland wrote some of Lachrimae or Seven Teares in Denmark, and he dedicated the work to Christian’s sister, Princess Anne. We’ll hear “Lachrimae Tristes” by John Dowland.

The salterio is a plucked psaltery that became popular in the Italy in the Baroque era. It is made of a trapezoid-shaped wooden box with sound holes. Courses of strings are stretched over at least one bridge and attached with pegs, usually made of wood, metal, or bone. The instrument has ancient roots that go far beyond Europe, and it was especially popular in the art music of the eighteenth century. Here is the Allegro and Allegrissimo from Sonata for Salterio and Basso Continuo in G Major by Angelo Conti.

Allegro and Allegrissimo from Sonata for Salterio and Basso Continuo in G Major by Angelo Conti. Margit Übellacker, salterio, is dedicated to the revival of historical dulcimers, including the salterio, pantaleon, and dulcemelos. She performed with keyboardist Jürgen Banholzer in the ensemble La Gioa Armonica on our featured release Per il Salterio.

At the peak of its popularity, the salterio was played by members of the aristocracy, nuns, and professional musicians. [18th-century] Oboist Joan Baptista Pla performed internationally on the salterio as well as the oboe. Spoleto’s leading families, Corvi and Travaglini, favored the salterio. Here is the Largo from Sonata for Salterio and Basso Continuo in C Major by Italian Baroque composer Carlo Monza.

The writer for this edition of Harmonia was Sarah Schilling (or Sarah Huebsch Schilling). 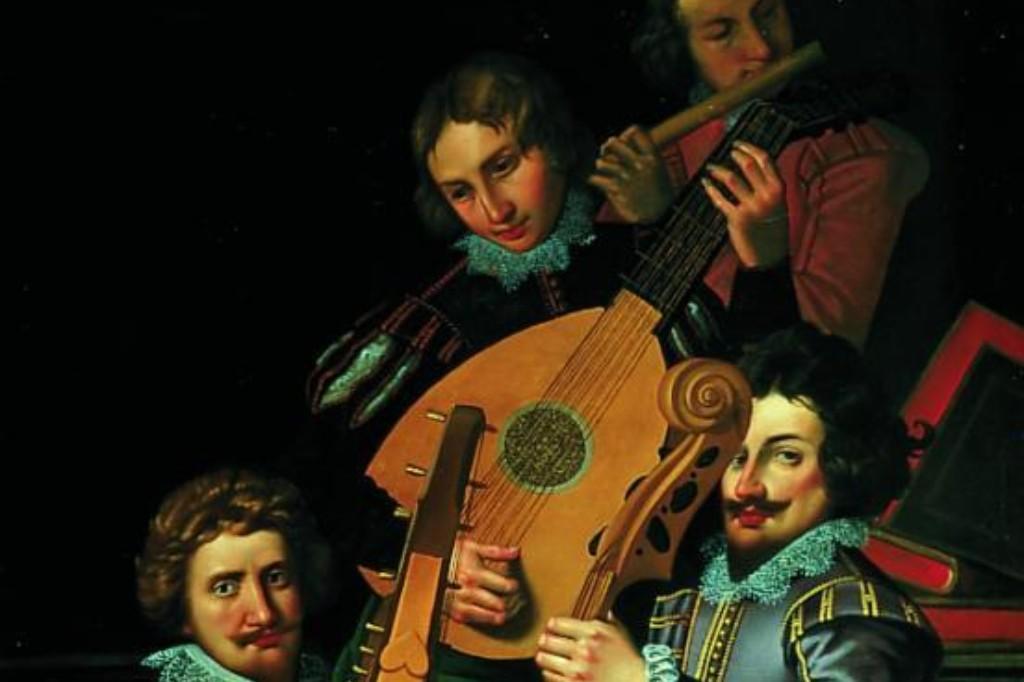 Christian IV of Denmark and his brother-in-law James Stuart of England knew how to throw a party! Hard-drinking and raucous revelry abounded. At one masque performance, the players were so intoxicated that they forgot their lines and fell to the ground in what one observer called a “drunken fiasco.” King Christian’s fondness for the British Isles informed his musical patronage, as we’ll hear this hour on Harmonia, as we sample music from Christian’s court at Copenhagen. Plus, our featured release by ensemble La Gioa Armonica explores 18th-century music for psaltery.

[Check out this interview with La Gioa Armonica about our featured recording.]