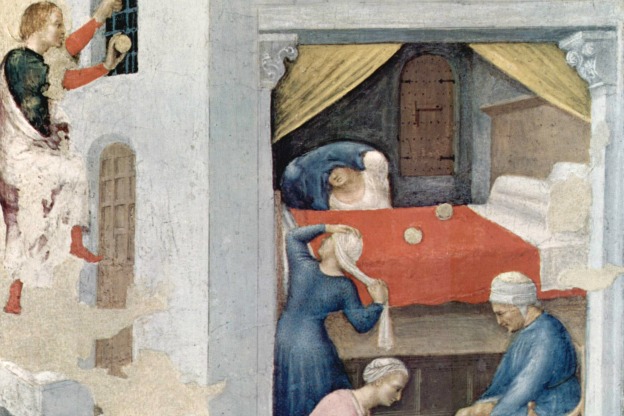 Time capsule for this episode: 1400

The historical Saint Nicholas was the Bishop of Myra, a city in what is now Turkey. He died in the year 314. He was known in his lifetime for his generosity and his honesty, and many miracles were attributed to him. Nicholas was so popular that he was regarded as the patron saint of quite a few diverse things-sailors, perfumers, pawnbrokers, unmarried women, choirboys, and towns stretching from Russia to Iceland. He was also a protector of children, and a giver of gifts-and I'll bet you can see where this is leading.

In Belgium and Holland, as early as the 14th century, we find the custom of children receiving gifts from Saint Nicholas on his saint's day, December 6th, a practice that's still observed in several northern European countries.Â The customs of gift-giving and merry-making on Saint Nicholas' day came to the New World with Dutch Protestants a few hundred years later. The Dutch version of his name-Klaas, for Nicholas, and the word for Saint-Sinter, combine to give us...Sinter Klaas. Sound familiar?

Here's a medieval conductus, recounting the miracles of Saint Nicholas, performed by Anonymous 4.

Saint Nicholas was also the subject of several famous medieval plays-well, famous to medieval drama performers and scholars, anyway. These were based on several of the many miracles attributed to Nicholasâ€“and believe me, by this time, 900 years after his lifetime, the stories had grown more and more colorful and fantastic with each telling.

One of the most well-known stories tells of a man so poverty-stricken that he is about to force his daughter to take up a life of prostitution. Saint Nicholas somehow knows this, and is horrified at the thought, and so he takes "a great sum of gold," tucks it into a small sack, and wings it through the man's window that night. The man is overjoyed, but then proceeds to use the entire sum as a dowry for his first daughter.

Needless to say, that leaves the man's next two daughters in the same unpleasant situation. To make a long story short, Saint Nicholas does the same thing again, and again the man marries off the second daughter. The third time St Nick throws twice as much cash, which wakes the hapless man with a great thump. He then runs out of the house in an attempt to catch his secret benefactor. He catches up with the saint, who swears him to secrecy.

Here is a reading of that story in Middle English, set to a chant melody.

Byzantine Chant for the Christmas Season

Modern Orthodox churches inherited the liturgical and musical traditions of the Eastern half of the Roman Empire, which at its height ranged throughout the Balkans, the Eastern Mediterranean, Asia Minor, and the Middle East. At Christmastime, there's a multitude of services in an Orthodox church, and each is a multi-sensory event. Imagine icons covering every inch of the wall; an incense cloud hanging over the church; movements involving the sign of the cross, bows and prostrations; the taste of the communion rite; and, of course, the music!

Here's an excerpt from the canon sung during the Matins service for Christmas day, performed by the Greek Byzantine Choir, directed by Lycourgos Angelopoulos.

"Byzantine" chant has roots in ancient Greek music, as well as in the Jewish synagogue and in poetry and hymns composed in Syriac in Asia Minor. Byzantine chant may have flourished under the great dome of Hagia Sophia in Constantinople, but it remains a living form of sacred music in places such as Greece, Lebanon, Palestine, Romania, parts of Russia, and in America.

During the Christmas season, we find the only known liturgical drama within the Byzantine repertoire. It tells the story of the Three Youths in the Fiery Furnace found in the Old Testament book of Daniel. The "Service of the Furnace" was preserved in a late medieval manuscript found at St. Catherine's Monastery at Mount Sinai, Egypt. Traditionally, it was performed on the Sunday before Christmas.

Here's an excerpt from the "Service of the Furnace" sung by Cappella Romana under Dr. Alexander Lingas' direction.

The tune Greensleeves has a long history extending at least as far back as the 16th century, but its association with the Christmas carol What Child Is This? is relatively late. It wasn't until the 19th century when three stanzas of a poem (called "The Manger Throne") by William Chatterton Dix were set to the Greensleeves melody.

Dix's text was only one of many set to the famous tune; the original text begins with the words, "Alas, my love, you do me wrong / To cast me off discourteouslyâ€¦" That Henry VIII wrote the song as a lover's lament for Anne Boleyn is a good but unfounded story.

Shakespeare referred to the tune in his 1602 play the Merry Wives of Windsor when Falstaff exclaims, "Let the sky rain potatoes; let it thunder to the tune of Green Sleeves!" Over a hundred years later, in John Gay's Beggars Opera, a prisoner awaits his execution on the Tyburn tree, and sings yet another version of Greensleeves.

Here are two versions of Greensleeves: the first sung by Judith Malafronte on a recording called Shakespeare's Songbook, which has collected all of the songs used or mention in Shakespeare's plays. The second, Paul Elliott performed John Gay's Greensleeves from The Beggar's Opera.

Towards the end of the 17th century, John Playford published his English Dancing Master, and in it included a piece that has come to be called Green Sleeves and Pudding Pies. Several other versions were adapted for lute, and still others came to be used not only as sacred music but also as political ballads by the Cavaliers during the English Civil War. Here yet another text on the Greensleeves tune from 1642, written to celebrate the New Year.

Here's The Old Year Now Away is Fled, set to the tune Greensleeves, performed by Julianne Baird and Parthenia from the CD As It Fell On A Holie Eve: Music for an Elizabethan Christmas.

The Christmas Carol we know as Good Christian Men, Rejoice is an 1853 English paraphrase by John Mason Neale of the medieval tune In Dulci Jubilo. The original song text is macaronic, meaning that it combines Latin with vernacular German.

Although some versions of the song may have already been in existence, one of the earliest surviving manuscripts of In Dulce Jubilo is from Leipzig around the year 1400. The tune is also found in several 16th century German hymn books, was translated into Swedish in the 1582 songbook Piae Cantiones, and exists in the compositions of numerous composers throughout Europe.

Our featured recording explores the intersection of pagan winter celebrations and early Christmas traditions bound together through the centuries in the music of the Celtic lands.Â Conceived and arranged by Jeannette Sorrell of the baroque orchestra Apollo's Fire and Sylvain Bergeron of the ensemble La Nef, this project draws on original early sources paired with traditional tunes and newly composed pieces.

Here's O'Carolan's Favorite Jig, a piece by Turlough O'Carolan, (an Irish musician who was only 15 years older than Bach), followed by an antiphon from a 13th-century Scottish service, the Vespers of St. Kentigern.

In 1874, Thomas Wright published a book in London called Songs and Carols Now First Printed, from a Manuscript of the Fifteenth Century. Here's a 21st century performance from that publication, sung in Middle English: Nowell, Tydings Trew performed by Apollo's Fire and Ensemble La Nef, on our featured recording, Sacrem Mysterium: A Celtic Christmas Vespers, released on the Avie label in 2012.