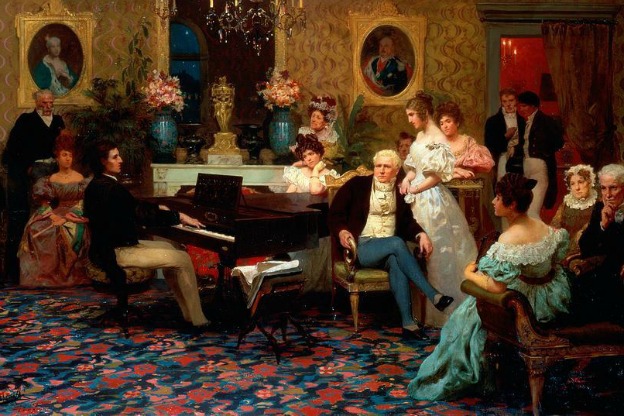 Listeners get to hear Chopin’s very famous concertos as ‘pure’ piano music. Rather than piano solo with full orchestra, the concertos are performed on this recording as duets—one piano playing the solo part, the other accompanying with a reduction of the orchestral score. The result is chamber rather than symphonic music, the piano soloist no longer one standing out against the background of many but instead collaborating as an equal partner. In this way, there is room for a different approach to nuance in which the musical expression leans more toward dialogue than to oration.

Although he composed it for piano and orchestra, we can imagine that Chopin might approve of the arrangement for two pianos. They are performed this way more often than you might expect and there is some historical precedence for it.  Chopin was a highly sought after teacher in Paris, and he frequently used his own concertos as teaching material for his students. During lessons, the student would play the solo piano part and Chopin would cover the orchestral parts on his piano.

Duo versions of the concertos were also heard at smaller, private gatherings and performances. In 1842 Chopin accompanied his student and protégé Carl Filtsch on the E minor concerto in performance. We know for certain that Chopin made his own piano reduction for this, but since he played it by heart, we can’t look it up. Over the years though, various and sundry other piano reductions have been made.  For their recording, Wayenberg and Oei arranged their own.

The instruments used for this recording are original 19th century Erard grand pianos of the type that Chopin himself could have played in Paris.   The Erard firm was one of the most distinguished piano manufacturers of its time, and their instruments of various makes and models were owned and played by Haydn, Beethoven, Liszt, and Mendelssohn. Founded in the mid-18th century by Sebastien Erard, he and his brother established headquarters both in Paris and London.  Erard must have been a tinker-er: he continuously worked to improve the design and manufacture of pianos, in time, perfecting the mechanisms of double escapement and key repetition.  When Sebastien died in 1831, his nephew Pierre took over the firm continuing its success for a time. But musical tastes changed and Erard’s pianos eventually fell out of fashion in favor of louder and more sustained Steinway pianos. So, to be able to listen to Chopin’s music played with the clearer and more transparent sound of historically appropriate Erard pianos is a real treat.  On this recording, an 1846 Erard is used for the solo parts with the accompaniment played on a similar Erard from 1884.

Wayenberg and Oei are an unlikely pair.  Born in 1929, the 87 year old Wayenberg has had a long and illustrious performing career while the 20 year old Oei is just starting out. The 67 years between the two is less a gap and more an opportunity that lets each bring their own musical generation to the table, and both are richer for it. Wayenberg is grounded in the modern-romantic piano school of playing while Oei’s interest in historical keyboards with especiallyt in fortepianos and Erard French grand pianos, did much to propel this project with original instruments.  Playing together since 2012, this Chopin release marks their fifth anniversary as a duo.

Recorded on location with the instruments in piano restorer Frits Janmaat’s shop, Maison Erard in Amsterdam, this isn’t your run of the mill performance. Contemporary accounts paint a picture of a composer who preferred the small scale to the big, the intimate salon to public concert, who valued delicacy, nuance, subtlety and lyricism to overstated bravura.  This recording from the Wayenberg-Oei duo brings us closer to that Chopin, to his Paris of the 19th century, and to his instruments.