Chiaroscuro is a technique in visual art that tells vivid stories through sharp contrasts of light and dark. Rembrandt, Caravaggio, and Leonardo da Vinci all used chiaroscuro in their Renaissance masterpieces. This hour, we’ll uncover moments of darkness and light with instruments and voice. Plus, music from our featured release, Soundscape: Leonardo Da Vinci, by Capella de la Torre, led by Katharina Bäuml.

The opening chorus of Christoph Graupner’s setting of Psalm 130, “Out of the depths have I cried unto thee, O Lord,” from his cantata by the same title, performed by The Ricercar Consort,  from their 2010 release, “Aus der Tiefe.” We’ll hear another setting of this famous text by German baroque composer Johann Philipp Fortsch later on today’s program.

The arts can uplift, entertain, and inspire us. Sometimes, though, when we’re in a place of sadness, the best way to deal with our emotions is to lean in. In the English Renaissance, embracing feelings of sadness, and the artistic expression of that feeling, was very much a trend. John Dowland’s song “In Darkness, Let me Dwell,” for lute and voice, invites us to wallow in melancholy—with the world around us shifting into uncertainty.

“In Darkness let me Dwell,” a song for lute and voice by English Renaissance composer John Dowland. We heard tenor Michael Chance and lutenist Paul Beier.

Melancholy was in vogue in Italy as well, where we meet Flemish composer Cipriano de Rore, who worked in Venice and Ferrara. Cirpano de Rore was especially skilled in madrigal writing, which brings to life poetry of Italian masters like Petrarch. In his Book One madrigal, “Now that the heavens and the wind and the earth are silent,” Cipriano de Rore paints sadness in a sonnet by Petrarch using vocal polyphony. The poem begins, “Now that the heavens and the earth and the wind are silent, and sleep reins in the beasts and the birds, Night drives her starry car about, and in his bed the sea lies without a wave. I wake, I think, I burn, I weep.” The poem ends, “a thousand times a day I die and a thousand am born, so far am I from my health."

We heard the madrigal “Now that the heavens and the wind and the earth are silent,” by Cipriano de Rore. Scott Metcalfe led Blue Heron from their 2019 release, “I madrigali a cinque voci.”

Sometimes, we connect with feelings of darkness not with text, but with timbre. Instruments that play in low registers can evoke feelings of stability as well as sadness. Violone, bassoon, cello, theorbo, and organ pedals often provide a harmonic musical foundation for ensembles—the basso continuo group. And occasionally, these instruments are also given their own chance to shine. We’ll hear Giovanni Lorenzo Lulier’s sonata in A Minor featuring bass violinist Renato Criscuolo.

Lux aeterna, eternal light – plainchant sung by Cantores in Ecclesia, from a CD called “O Lux Beatissima.” This hour, we’re exploring musical expressions of darkness and light. We heard a lot of darkness in the first half of the program, but let us not remain in darkness forever. Psalm 130 begins, “Out of the depths have I cried unto thee, O Lord.” The believer pleads with God for forgiveness and redemption. In Judaism, this psalm is used in the holy season for eleven days after Rosh Hashanah, as congregants prepare themselves for the repentance of Yom Kippur. We’ll hear a setting of Psalm 130 by German baroque composer Johann Philipp Fortsch.

We heard Johan Philipp Fortsch’s setting of Psalm 130, “Out of the depths have I cried unto thee, O Lord.” Greta de Reyghere was the soprano with Ricercar Consort.

Music from Handel’s Lenten oratorio, Messiah. We heard bass soloist Christopher Purves with The Sixteen and their orchestra directed by Harry Christophers.

Our featured release is Soundscape: Leonardo Da Vinci, featuring music from the time and place of one of the greatest minds of his age. Leonardo was a painter, sculptor, engineer, and philosopher. And what better way to describe music surrounding this Renaissance man than with a Renaissance wind band, where players often have to switch among five or more instruments in a single concert! We’ll hear Heinrich Isaac’s “A la bataglia” on shawms and sackbuts.

In addition to his pursuits in architecture, art, and beyond, Leonardo da Vinci wrote music. His love of puzzles is evident in “Amore sola fa remirare,” “A musical riddle”—an improvisation based on words and note names. Hear the syllables in the title? Amo-re-so-la-fa-re-mi-ra-re.

“Amore sola mi fa remirare,” “A musical riddle,” music by Leonardo da Vinci. Katharina Bäuml led Capella de la Torre. Let’s end with a cheerful tune by Marchetto Cara. The Renaissance courtier Baldassare Castiglione praised Cara and Leonardo da Vinci in his famous book, The Courtier. “Nor does our friend Marchetto Cara move us less by his singing, but with a gentler harmony; because he softens and penetrates our souls by placid means, full of plaintive sweetness, greatly stirring them to sweet emotion.” Here is “Tante volte, sí, sí, sí” by lutenist and composer Marchetto Cara. 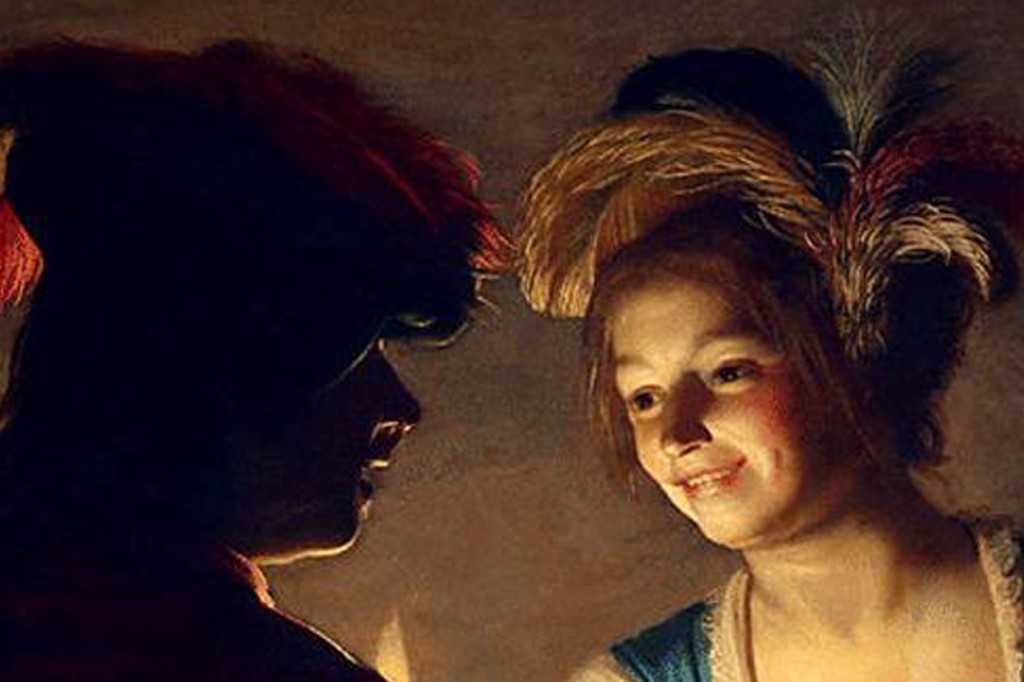 Chiaroscuro is a technique in visual art that tells vivid stories through sharp contrasts of light and dark. Rembrandt, Caravaggio, and Leonardo da Vinci all used chiaroscuro in their Renaissance masterpieces. This hour, we’ll uncover moments of darkness and light with instruments and voice. Plus, music from our featured release, Soundscape: Leonardo Da Vinci, by Capella de la Torre, led by Katharina Bäuml.