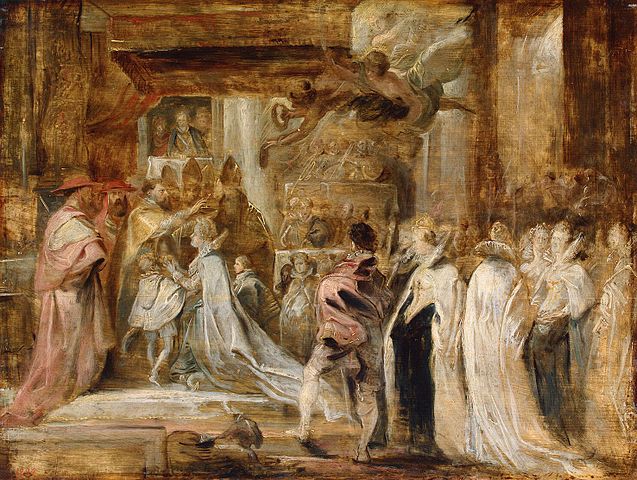 The House of Medici ruled Florence for the better part of 300 years.  Their patronage of the arts reached from Dufay to Handel, and this hour on Harmonia we'll explore this wide swath of music history through the Medici lens.  From the beginnings of Italian opera to the perfection of the baroque concerto by Vivaldi, the Medici influence helped to foster some of the greatest works of art through three centuries.

From David Schrader's album, Scarlatti on Fortepiano, that was Domenico Scarlatti's Keyboard Sonata in G Minor.  Though most modern historically informed performances of these sonatas are given on harpsichord, there's ample evidence that Scarlatti was well acquainted with the newly-invented fortepiano and its creator, Bartolomeo Cristofori.  Both Scarlatti and Cristofori were under the patronage of Grand Prince Ferdinando de' Medici at the same time, just as Cristofori was perfecting his invention.  Scarlatti was later under the patronage of Cardinal Ottoboni, who was sent a Cristofori piano as a gift from the Grand Prince.  There seems little doubt that Scarlatti would have been quite taken with this new invention and delighted to play his sonatas on such an instrument.

The long line of powerful Medici begins with Cosimo, born in 1389.  He instituted the first musical chapels, emulating those in northern Europe.  His sons Piero and Giovanni brought many fine musicians to Florence from the north, and were both well acquainted with Guillame Dufay, who promised to send them the piece we are about to hear, a lamentation for Constantinople.  We'll hear The Early Music Consort of London from their album called The Art of Courtly Love.

You've just heard a Lament for Constantinople by Guilliame Dufay, performed by The Early Music Consort of London from their album The Art of Courtly Love.

Though Dufay never succeeded in earning a post at the Medici court under the patronage of brothers Piero and Giovanni, Piero's son Lorenzo the Magnificent employed many fine composers, among them Heinrich Isaac, Alexander Agricola and Johannes Ghiselin.  Next up, we'll hear Isaac's lament on Lorenzo's death, "Quis dabit capiti meo aquam" in a performance by the London Pro Musica.

Next, we'll jump forward to the early baroque era and the music of Francesca Caccini.  She served the Medici court as composer, singer, and teacher from about 1602 to 1627.  She often performed alongside her siblings and parents, including her famous father Giulio.  The song we're about to hear, "Chi e costei," is a beautiful ode to Mary that could easily be mistaken for a secular love song.  Our performers are Henriette Feith and David Van Ooijen.

The Birth of Opera

It should come as no surprise that the House of Medici played a role in the birth of opera.  The 1600 wedding of Maria de' Medici and Henri IV of France saw performances of not one but two early operas – Giulio Caccini's Il rapimento di Cefalo and Jacopo Peri's Euridice.  The latter is the first opera for which the complete score has survived.  We'll now hear the Prologue from Euridice performed by Ensemble Arpeggio.

We now move from the birth of opera to the perfection of the solo concerto in the hands of Antonio Vivaldi.  His set of 12 concerti, L'estro Armonico remains at the pinnacle of baroque virtuosity.  Vivaldi dedicated this set to Ferdinando de' Medici, a supporter of the famous Ospedale della Pietà where Vivaldi's all-girl orchestra made waves performing extraordinarily difficult music with great skill.  Next, we'll hear the opening movement of the E Major Violin Concerto from this collection, almost certainly first performed by these talented orphan girls.  This is Tafelmusik Baroque Orchestra with soloist Elizabeth Wallfisch.

That was Tafelmusik Baroque Orchestra and violinist Elizabeth Wallfisch performing the first movement of Vivaldi's Violin Concerto in E Major, Op. 3, No. 12 from L'Estro Armonico.

Ferdinando de' Medici invited an impressive array of musicians to Florence, including Alessandro and Domenico Scarlatti, Giovanni Legrenzi, Benedetto Marcello, and George Frederic Handel.  Handel was also well acquainted with Ferdinando's sister, Anna Maria Luisa de' Medici, and was fond of the librettos of Antonio Salvi, a Medici court physician and poet.  We thus find the Medici family at the center of Handel's opera career, with Antonio Salvi providing libretti for a number of Handel's works, including Ariodante, Rodelinda, and Arminio.  Next up, we'll hear "Ti laschio in ceppi avvinto," from Arminio performed by Vivica Genaux and Les Violins du Roy from their album of arias by Handel and Hasse.

We've just heard "Ti laschio in ceppi avvinto" from Handel's Arminio with a libretto by Medici court poet Antonio Salvi.  Vivica Genaux was the soloist with Les Violins du Roy from their album of arias by Handel and Hasse.

Our featured recording for today's broadcast is "Discovering the Classical String Trio" from The Vivaldi Project.  Celebrating their tenth anniversary in 2017, The Vivaldi Project presents innovative programs of baroque and classical repertoire.  Their recent debut recording unearths neglected string trios of the classical era by J. C. Bach, Campioni, Boccherini, Haydn and others.  After listening, you may wonder why they've gone unheard for so long!  First up is Johann Christian Bach's Sonata in D Major, B. 36.  We'll hear both movements of this work, an Allegro assai and an Allegro grazioso.

That was Elizabeth Field, Allison Edberg Nyquist, and Stephanie Vial of The Vivaldi Project performing J. C. Bach's Sonata in D Major, B. 36.

We'll continue our exploration of the classical string trio with Carlo Antonio Campioni's Sonata in G minor, Op. 1, No. 2.  Campioni's music is not widely known today, but he was admired in his day both in Europe and in America, specifically by our third president, Thomas Jefferson.  We'll hear the Vivaldi Project perform both movements of this Campioni sonata, an Andante adagio and an Allegro con brio assai.

That was The Vivaldi Project performing Carlo Antonio Campioni's Sonata in G minor, Op. 1, No. 2 from their album "Discovering the Classical String Trio," released in 2016.

The writers for this edition of Harmonia was David McCormick.