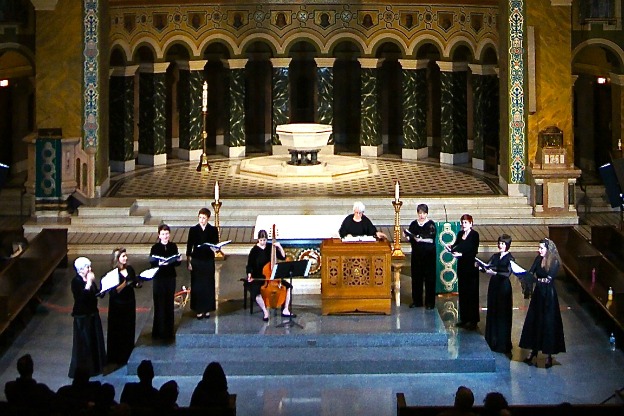 Time capsule for this episode: 1350

During the renaissance, ancient myth featured prominently in new works of art and music.Â A revival of Classical literature provided musicians with a treasure-trove of narratives and characters to draw upon for inspiration.Â According to Greek mythology, the union of the god Zeus and the titaness Mnemosyne produced the nine goddesses called the Muses.Â Each divine daughter embodied her own branch of the arts. Â Euterpe, the muse of music and lyric poetry, was held in special regard by composers.Â Euterpe is often depicted playing a flute, and she is believed by some to have invented the aulos, a wind instrument with two windways and one mouthpiece.

17th-century singer and composer Barbara Strozzi dedicated her seventh book of madrigals to the muse. From Strozzi's bookDiporti di Euterpe, or "Amusements of Euterpe" let's hear Tradimento, followed by an aria from Giulio Caccini's Le nuove musiche that addresses Euterpe directly, calling her to lend an ear to the poet's song of love.

Celestial Sirens: a live performance by The Newberry Consort

In the baroque-era convents of Mexico and Italy, nuns performed, arranged, and contributed new music for devotional use. In 2012, The Newberry Consort presented a program of music exploring this sacred music written for and by women in 17th-century convents.

Alba Tressina was a Carmelite nun at Santa Maria in Araceli, a church in Vicenza, Italy.Â Here's an excerpt from a live performance by The Newberry Consort, recorded on January 21, 2012 in Chicago. We'll hear a motet by Tressina.

The Celestial Sirens program also includes vocal pieces from the manuscripts known as the Mexican Choirbooks from the EncarnaciÃ³n convent in Mexico City and housed at the Newberry Library in Chicago.Â These choirbooks note that the nuns performed works of both European and Mexican composers, including the little-known Juan de Lienas.

Next, let's listen to music from 12th- and 13th-century Occitania, a historical region in southern Europe, and explore some the first known secular works composed by women.

The trobairitz were female musicians whose craft was an intimate part of courtly life.Â In the Middle Ages, well-to-do women were expected to be proficient singers, instrumentalists, and poets. Trobairitz composed, wrote verses, and performed for nobility.Â An estimated thirty-two songs survive-and countless more were likely written; but, in the absence of definitive attribution, have been marked as "anonymous" or attributed to men. Â Many of these works were, in fact, collaborations between trobairitz and troubadours.Â Their gathered writings demonstrate artful exchanges on subjects such as faith, virtue, and love.

Homer's Odyssey has nourished the artistic imaginations of countless artists across centuries.Â Scholars believe that sung versions of the epic were enjoyed long before it was ever written down. In our featured recordingMyths and Allegories, the ensemble Les DÃ©lices brings together works by French baroque composers in a retelling of Odysseus's harrowing tale.Â Instrumental compositions inspired by the Odyssey and vocal settings of Homer's stories recount episodes along the journey.

The recording includes never-before-heard adaptations of cantatas by Elisabeth Jacquet de la Guerre and Thomas-Louis Bourgeois.Â Here's an excerpt from de la Guerre's Le Sommeil D'Ulisse, in which a maddened Poseidon whips up a dangerous storm that threatens Odysseus's ships and crew.

Of course, despite Poseidon's efforts, Odysseus survives and eventually makes it home. The following excerpts from Jean-FÃ©ry Rebel's opera Ulysse tells of Odysseus's reunion with his wife, Penelope.