The Cathedral of Seville

During the Renaissance, Spain’s voyages to the Americas brought about power and prosperity to its empire. After a royal decree in 1503, Seville’s port held exclusive shipping rights from the New World. With this newfound position of wealth, Seville became a cultural and financial powerhouse—especially the Seville cathedral, which was also a musical powerhouse, as we’ll hear this hour. Later in the program, we’ll move north to England for music from our featured release, The Lily & The Rose, performed by the Binchois Consort led by Andrew Kirkman.

The anonymous villancico “Riu Riu Chiu,” performed by Flautando Köln from their 2009 recording, Musica Hispanica: Music From Spain’s Golden Age. Riu Chiu is one of those pieces that has become one of the Top Ten Hits of the Renaissance. Interestingly, the original Spanish manuscript is now held in a library in Uppsala, Sweden. Many of us baby boomers first heard the song, of all places, on one of the Christmas episodes of the TV show The Monkees in the 1960s.

During the Renaissance, Spain’s voyages to the New World brought wealth and prosperity to the empire. In 1503, Queen Isabella I of Castile decreed that Sevilla, or Seville, would maintain a port for exclusive trading rights to the Indies. With this sudden influx of wealth, Spain solidified its financial as well as cultural dominance—and the Cathedral of Seville emerged as a center of art in the Western world.

Francisco Guerrero worked at Seville’s cathedral for the better part of his career. After over two decades as assistant to the cathedral’s music director, Guerrero became Maestro di Capilla. We’ll hear Guerrero’s motet “Mary Magdalena” for six voice parts, performed by The Sixteen.

“Mary Magdalena” by Seville Cathedral composer Francisco Guerrero. The Sixteen was led by Harry Christophers in that 2015 Coro recording Flight of the Angels.

On Guerrero’s way back to Seville after a trip to the Holy Land, he was attacked by pirates—twice! Although he resumed his work at the Seville Cathedral when he returned to Spain, Guerrero never really recovered from this incident financially. Unable to pay his publishing and living costs, Guerrero ended up in debtors prison. Luckily, he only had to spend a couple of weeks there before his Cathedral employer paid his way out.

Next, we’ll hear “Pastores loquebantur.” Guerrero wrote this motet while working as Maestro di Capilla at Seville’s cathedral, before his trip to the Holy Land derailed his career and emptied his wallet.

Guerrero owed much of his success to Cristóbal de Morales, since Morales had recommended Guerrero for a post early in his career. Like Guerrero, Morales was a Seville-born artist with an itch to travel—and his music traveled even further than he did. Within a generation of his death, Morales’ music had been heard in most of western Europe and Mexico. We’ll hear Morales’ setting of “Salve Regina,” a Marian hymn arranged here for voice and lute.

Welcome back. This hour on Harmonia we’re exploring Renaissance music from the Seville Cathedral. Portuguese born composer Pedro de Escobar held several posts at the Cathedral under Isabella the first. As Seville’s Magister puerorum, master of the choirboys, Escobar was tasked with feeding, housing, and supervising the boys as well as teaching them music. Unable to live off his meager salary at the cathedral, Escobar eventually left to work as music director for Cardinal Dom Alfonso of Lisbon in his native Portugal.

We’ll hear Escobar’s “In Festivitatibus beatissimae Virginis Mariae” and “In Epiphania Domini” performed by the recorders of Flautando Köln.

Francisco de Peñalosa was active in Seville, though he was never music director at the cathedral. Peñalosa spent much of his career in the Aragonese chapel and at the Vatican under Pope Leo X. Still, he continually kept touch with his roots in Seville, attempting to hold positions at the Seville cathedral from time to time. Here is Peñalosa’s setting of the Corpus Christi Hymn “In passione positus,” performed by Ensemble Giles Binchois and Les Sacqueboutiers.

The Lily & the Rose

Music from our featured release this hour, The Lily & The Rose, brings us north to England, and The Binchois Consort performs works from the long fifteenth century with certain alabaster images from English churches in mind. The works bring to life the stories in these images. Rather than remaining silent stone reliefs on the walls of Medieval churches, the images seem to sing as well, vivified by voice and song.  First, we’ll hear Guillaume Le Rouge’s setting of “Stella celi extirpavit” based on the English melody “So ys emprentid.”

The Binchois Consort sang “Stella celi extirpavit” from our featured release, The Lily & the Rose.

In John Dunstaple’s motet “Gaude virgo salutata,” we hear layers of text and melody woven together. The piece is used to explain the Annunciation. Taken together with alabaster images of Mary receiving the Holy Spirit, this must have been a powerful piece of Marian devotion. We can imagine the believer viewing shadowy, sculpted images by candle light while listening to the motet.

We’ll conclude with another setting of “Stella celi extirpavit,” this one set by John Cook. In this motet, the believer pleads for Mary’s intervention, saying “The star of heaven / that suckled the lord / has rooted out the plague / that the first father of men planted.”

“Stella celi extirpavit” by John Cook. The Binchois Consort performed in their 2018 Hyperion release, The Lily & The Rose. 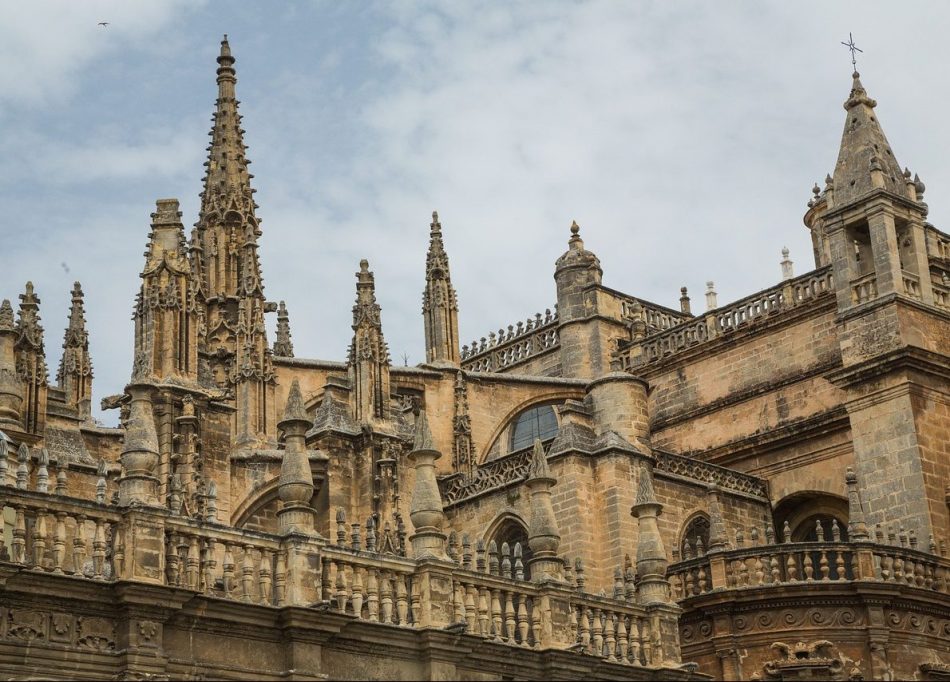 During the Renaissance, Spain's voyages to the Americas brought about power and prosperity to its empire. After a royal decree in 1503, Seville's port held exclusive shipping rights from the New World. With this newfound position of wealth, Seville became a cultural and financial powerhouse-especially the Seville cathedral, which was also a musical powerhouse, as we'll hear this hour. Later in the program, we'll move north to England for music from our featured release, The Lily & The Rose, performed by the Binchois Consort led by Andrew Kirkman.