When the topic of pandemics arises, we medievalists tend to think immediately of the Black Death, which started in the 14th century and occasionally re-occurred, eventually killing an estimated 25 million people in Asia and Europe. We reflect on some of the poets and composers who lived through that horror, and how it inspired their work. Boccaccio’s masterpiece, Decameron, is a prime example – idealized fiction written to distract both its author and its readers from real life--so we thought, perfect, let’s distract our listeners with beautiful music that sets poetry from the Decameron. The adventure began, but it did not go where we thought it would. Join us!

For hundreds of years, we have been advised in times of trouble to try to keep our thoughts positive. With that in mind, on today’s program, we’re going to focus on an Italian poet who survived the Black Plague - the pandemic that hit Italy in 1347. That horrific catastrophe, which killed more than 40% of the population of Florence and its surrounding countryside, was the inspiration for Giovanni Boccaccio’s masterpiece, the Decameron, a book that itself was read by people trying to escape the horrors of everyday life. The book tells of 10 noble young Florentines, 7 female and 3 male, who go off to the country to escape the plague – not the real country, where ants crawl up your leg and you get poison ivy, but the idealized country. For 10 of the 14 days they are away, they take turns telling ten stories each day - from tragic to triumphant, from religious to X-rated.

At the end of each day they eat and drink a wonderful supper, then after dinner, they sing and dance together, ending each night with one person of the ten singing a ballata, for which Boccaccio tells us the words – but alas, gives us no hint about the tunes. The ballata is an Italian poetic and musical form that involves verses separated by ripresas, kind of a chorus in with which others could chime. These ballate have three to six verses separated, presumably, by the ripresas as a sort of “All together now…” - perfect after dinner entertainment.

So, are there musical settings of Boccaccio’s ballate elsewhere? Luckily for this program, the answer is yes - an interesting “yes.”

This is Esther Lamandier singing and playing the vielle:

Esther Lamandier accompanied herself on the vielle in a historically informed, but very unusual performance of Lorenzo da Firenze’s ballata Non so qual i’ mi voglia, recorded in the 1980s.

In the Decameron, the ballate were almost always sung solo--only once accompanied by a lute, which was played by someone else. They are also very much longer than this ballata. Is this what they sounded like? Is it perhaps a bit idealistic to expect a young noble woman to undertake this sort of vocal virtuosity, or was this kind of ornamentation part of an idiomatic vocal style at that time? Hard to say, but hey, there were no bugs at their picnics either.

Boccaccio’s ballate may have been read frequently over the centuries, but they don’t seem to have been sung much between the end of the 14th Century and the second quarter of the 16th Century, when the ballata was suddenly reborn as a polyphonic madrigal. Here’s an early example from Jacques Arcadelt, a madrigal in four parts called Io non ardisco di levar piu gli occhi: listen for the return of the ripresa.

Searching through later repertoire for ballate from the Decameron yields some very interesting results. For example, there’s an early setting of the first verse of the ballata for the fifth day by Francesco de Layolle.  But then around 1542 Domenico Ferabosco leapt to the top of the renaissance best seller charts, and Domenico's most famous composition is the madrigal Io mi son giovinetta, the beginning of Neifile's ballata from the end of the ninth day. The madrigal went viral—an anachronistic but appropriate term, considering our topic--appearing in dozens of prints between 1542 and 1654. Its ripresa can be translated as “I am a young girl, and I like to be merry and sing in the new season, Thanks to love and sweet thoughts.” Imagine a young lady walking happily through the meadow seeing her beloved’s face in all the flowers, “The face of him, who loving me, will catch me and hold me forever.”

There now – isn’t that a lovely positive image? We heard the Gesualdo Consort Amsterdam, directed by Harry van der Kamp, singing Domenico Ferabosco’s greatest hit, Io mi son giovinetta, with lyrics by Boccaccio. None other than Giovanni Pierluigi da Palestrina (maybe having met Domenico in Rome) used this madrigal as the basis for a mass for four voices that he published in 1570.

Now let’s hear what Jan Pieterszoon Sweelinck, up in the north, did with Ferrabosco’s tune and Boccaccio’s words in a setting published in 1612 for two voices. The piece is in there, you can tell, but it is simultaneously simplified by removing two parts, and made much more challenging for the two singers remaining:

Now it gets even more interesting. Somewhere along the way some clever person wrote a different poem, obviously very much influenced by Boccaccio. Its opening words, Io mi son giovinetta are the same, so one has to tread very carefully when doing research.  The new version stars a shepherdess and a shepherd. It begins, “Io mi son giovinetta e rido e canto a la stagion novella”: “I am a young girl and I laugh and sing at the new season.” It goes on, and the shepherd appears, to whom the girl says, “Fly if you are wise, the passion in the beams of this Spring will never be for you!”

None other than Claudio Monteverdi composed a madrigal setting of this new poem in his fourth book of madrigals from 1603.

That was the Consort of Musicke directed by Anthony Rooley in 2012 on a Musical Concepts recording entitled Madrigale erotici e spirituali. (I guess that was one of the erotici…) One cannot help but notice that both Ferabosco and Boccaccio have disappeared, and the noble lady has become a shepherdess, but the joy of the springtime remains…

Welcome back. We started out looking for settings of Boccaccio’s ballate from the Decameron, and found a whole trove of pieces stemming from his ballata Io mi son giovinetta. Now we’ve arrived in late 16th century Italy, and Boccaccio’s ballata has turned first into a madrigal, and then into someone else’s poem, though it retains the same first line. Also, with the new poem came some very particular new repertory—because this is the era of the Concerto delle dame, whose style of florid, highly ornamented singing brought great prestige to Ferrara and revolutionized the role of women in professional music. It was a time of great virtuosity, as you’ll hear. This is music of Luzzasco Luzzaschi, a slightly older contemporary of Monteverdi:

See what I mean about changing styles? We’ve come a long way from both Boccaccio and Ferrabosco, but we still remember and make lovely associations. We heard Luzzasco Luzzaschi’s Io mi son giovinetta sung by La Venexiana; Claudio Cavina, director, on their CD Concerto delle dame released by Glossa in 2009.

Here’s another virtuosa setting of the new poem, this time by Sigismondo d’India. Its words are becoming a bit sketchier now, but it is likely that the poetry aficionados still knew the poem, and even the original Boccaccio ballata that inspired it, from reading or reciting if not from musical settings. This setting was published in 1615, only three years after Sweelinck, just to give a bit of perspective.

Ah, the inimitable Emma Kirkby and her colleagues from The Consort of Musicke played and sang Sigismondo d’India’s setting of Io mi son giovinetta, no longer by Boccaccio, on the 1987 Harmonia Mundi release Il terzo libro de madrigali / Sigismondo d'India.

Diminutions, or ornamentations, on the madrigals—and the virtuosity to play them-- were also the territory of seventeenth century jazzers like Giovanni Maria Trabaci. Luckily, some of their work got written down, so we can have some idea of what happened to well-known pieces in the late sixteenth and early seventeenth centuries. This is from Trabaci’s Ricercate, canzone francese, capricci, canti fermi, gagliarde, partite diverse, toccata published in 1603, and still based on Ferabosco’s model:

Funky, yes? The pleasures of mean tone temperament –if you wondered whether someone forgot to tune the harpsichord, or were finding yourself getting tense as you listened, that’s what you were hearing in that Trabaci piece played by harpsichordist Silvia Rambaldi and countertenor Tadashi Miroku. Keyboards can’t adjust pitches in mid-piece, so they sometimes end up making sounds that singers are rarely forced to make.  And let’s let that take us almost gracefully into our recording of the week.

Jacques Arcadelt lived from 1507-1568 and was in the service of the Medici, the papacy, and the kings of France; he could hardly have had a more impressive career. And he has been unjustly neglected in recent memory. Cappella Mediterranea (performing the madrigals), Doulce Mémoire (the chansons) & Choeur de Chambre du Namur (the sacred music) have taken a large step toward remedying that with their 2018 issue of the 3 CD set Jacques Arcadelt: Madrigali, Chansons, Motetti.

Though he was a singer who made it all the way to the Sistine Chapel choir, it is as a madrigalist that Arcadelt is best known today. His First Book of Madrigals had a very long life in print, with some 58 editions appearing between c1538 and 1654; no other madrigal volume by any composer compares.

A significant amount of Arcadelt’s sacred music has rarely seen the light of day, though clearly at least some of it was sung at the Sistine Chapel. Listen to his version of the Lord’s Prayer – it is gorgeous!

Let’s end with Arcadelt’s greatest hit, His madrigal Il bianco e dolce cigno, sung by Leonardo García Alarcón, Cappella Mediterranea. Its words are: “The gentle white swan, singing, dies; and I, weeping, approach the end of my life. The difference is strange: he dies disconsolate, and I die blessed. That death, which is not to die, but to fill me with all joy and desire: if in dying thus, I will not feel sorrow, I will be pleased to die a thousand times each day.” 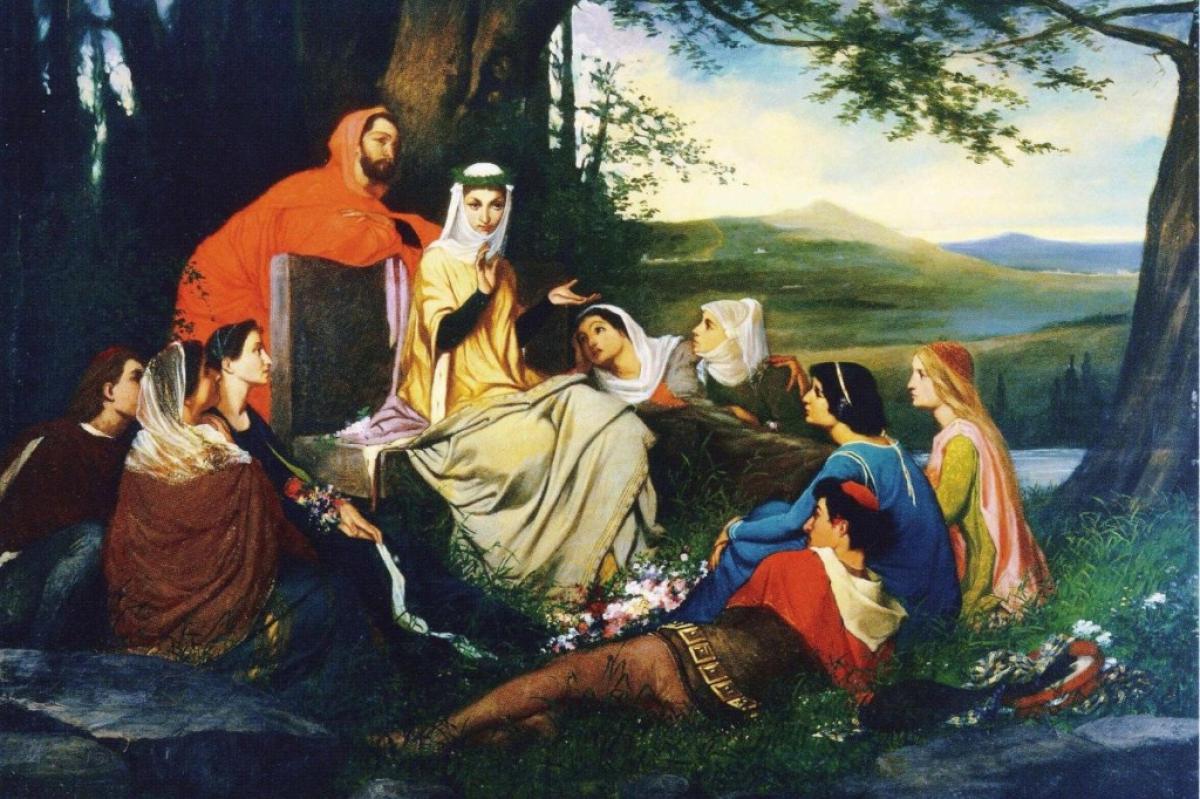 When the topic of pandemics arises, we medievalists tend to think immediately of the Black Death, which started in the 14th century and occasionally re-occurred, eventually killing an estimated 25 million people in Asia and Europe. We reflect on some of the poets and composers who lived through that horror, and how it inspired their work. Boccaccio’s masterpiece, Decameron, is a prime example – idealized fiction written to distract both its author and its readers from real life--so we thought, perfect, let’s distract you -- our listeners -- with beautiful music that sets poetry from the Decameron. The adventure began, but it did not go where we thought it would.