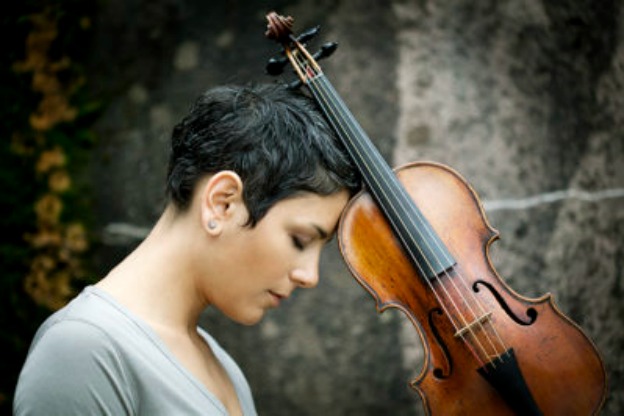 No longer confined to dance forms, or to appropriating existing vocal pieces, instrumental music came into its own in the 16th century. Though still closely tied to various aspects of vocal or spoken rhetoric, a separate repertory of instrumental canzonas, sonatas, ricercare, toccatas, fantasias, and the like, started to be cultivated for its own sake. By the first part of the 17th century, one instrument, namely the violin, was fullyÂ coming into its own. Â The influential Italian composer, Carlo Farina, was at the forefront of the violin's flourishing.

The son of a Mantuan viola player, Carlo Farina grew up surrounded by some of the best music and musicians of his time. Carlo probably first studied music with his Dad, but left Italy in 1625 to be Heinrich SchÃ¼tz's concertmaster in Dresden.Â By 1628, the orchestra was disbanded due to the Thirty Years War but during his short time there, Farina publishedÂ five collections of instrumental musicÂ totalling 128 works.

A new recording from Leila Schayegh prominently features Farina's sonatas for violin and continuo.Â Filled with rapid passagework, chromatics, and double stops, these compositions are a case in point of the violin's developing virtuosic capabilities. Farina pushes the early violin beyond its comfortable middle-range with writing that extends fully down to the raspy g string and stretches high to its upper registers.

For this recording, Schayegh has strung her violin entirely in plain gut, even on the lowest string. Baroque violinists often use a metal wrapped gut G, but Schayegh's all gut set-up lends a chiffy and brilliant sound to her playing.

Notation has always been, and will always be an approximation of aural sound.Â This is especially so in Farina's case as printing was still a primitive art at the time of his publications. The double stops he wrote pushed the limits of violin playing, and they also pushed the limits of music printing.Â It was hard enough to set the press for single note music, so the passages in Farina's sonatas with double stopping were indicated by numbers in the score that looks a lot like figured bass. The sections where violinists should take note of these numbers is indicated by the letter "B." For clarity, Farina printed instructions in the score explaining how to read the notation. Â "the number" Farina writes, "serves for the space between the note which is to be played below."

Interspersed between the pieces by Farina on this recording are other notable contributors to the early 17th century violin repertory.

Two of the tracks, the solo Fantasia by Steffan Nau and the Fantasia Frantz are both from an anthology of violin pieces known as the Breslau 114 manuscript. A French dancing master, violinist and composer, Nau spent much of his working career in England, but his writing for the violin reflects many of the same virtuosic qualities as his Dresden based Italian-born counterpart, Farina.

In her CD book, Shayegh writes extensively about historical violin position and posture. Using 17th century writings and illustrations as a guide, Shayegh holds the violin low-between the elbow and the shoulder-rather than up on the collar bone as most violinists now do.Â She also adopts a different bow hold, placing the thumb under the frog, or heel of the bow, rather than under the stick.Â The lower placement of the violin and the wider, less flexible bow grip means that the arm carries more weight against the violins strings. The resulting sound is up-front and direct, in some ways, less refined, or at least refined in a different aesthetic frame. Â And, for this repertory, there is something incredibly satisfying about that.

Clearly, violinist Leila Shayegh is center stage on this recording, but each supporting player also gets a moment in the solo spotlight.Â JÃ¶rg Halubek plays two harpsichord Toccatas by Michelangelo Rossi, lutenist Daniele Caminiti plays Melli's Capricio Chromatico, and violist da gamba, Jonathan Pesek plays an anonymous piece from the same Breslau manuscript from which comes the Nau violin fantasia.Â These interjections of other instruments and composers between the 6 Farina violin works, offers context and balance to the program.