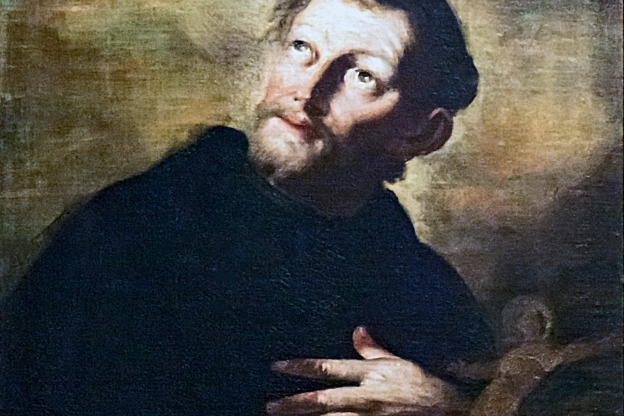 The Canadian ensemble Capella Intima has recorded a collection published in 1657 under the title Canzonette Spirituali, e Morali.  This Italian 17th century is essentially sacred-pop music because despite their sacred texts, many are built on popular dance forms, rhythms, and melodies.

The title of the collection indicates the sacred-secular popular mix. Canzona are in their usual form secular songs. But the further designation on the collection's title page as 'spirituali' and 'morali' signals that these will in fact not be secular songs, but religious ones in popular form.  In addition, the score written in alfabeto notation indicates that a guitar could have played the accompaniment, an instrument more often associated with secular music than music of the church.

Although published in 1657 as an anonymous collection, evidence points to the priest and composer Francesco Ratis as the likely composer of the Canzonette Spirituali, e Morali.  But in some ways, it is actually St. Philip Neri who we can thank for this music.

Neri was the founder of a confraternity of Christian lay volunteers who served the poor. In its infancy, the service organization gathered at Neri’s house for prayer, religious discourse, and music, but as the daily meetings grew, they moved to a church loft that had been remodeled as an oratory, or a prayer hall.  Pope Gregory XIII made Neri’s Congregazione dell'Oratorio an official entity in 1575, and the society of secular clergy continues to this day with many congregations scattered throughout the U.S. and around the world.

One of the early congregations modeled after Neri’s Oratory was established in Chiavenna in the 17th century by Francesco Ratis, the likely composer of the Canzonette Spirituali e Morali. Remember that in contrast to the church proper, Neri led spiritual exercises that were relatively informal. Ratis’s Canzonette reflect that informality. In this context, their lighter and popular musical forms make sense, as do their texts which are more personal than theological or formal-sometimes blithe, sometimes tender, sometimes sensual, often humorous.

Capella Intima is led by tenor and baroque guitarist Bud Roach and includes singers Sheila Dietrich, Jennifer Enns Modolo and David Roth. Formed in 2009 and based in Hamilton, Ontario, this is Capilla Intima’s first recording.